While the Covid-19 pandemic was picking up pace, it was not entirely clear in early March 2020 what was about to befall the whole world.  I certainly did not realise that the March 20 BSIA meeting would end up being my last for a year and half.  When meetings finally restarted in August 2021, I was travelling and missed the September meeting as well.  Though forecasts were mixed for Wednesday 13th October, fortune favours the brave astronomer and I hopped in a taxi with my Takahashi FC-76 in tow, with grey cloud still covering the sky.  Thankfully, even the one promising forecast (Accuweather) proved pessimistic, and upon reaching Primrose Hill, I was greeted with almost cloudless skies.

Marching quickly up the hill, I found 30-40 eager astronomers and a few telescopes and binoculars set up sharing some views of the gas giants.  I quickly set up the scope and used an 8-day old Waxing Gibbous Moon to align my finder.  That was the only time our near celestial neighbour would grace the field of an eyepiece that evening. 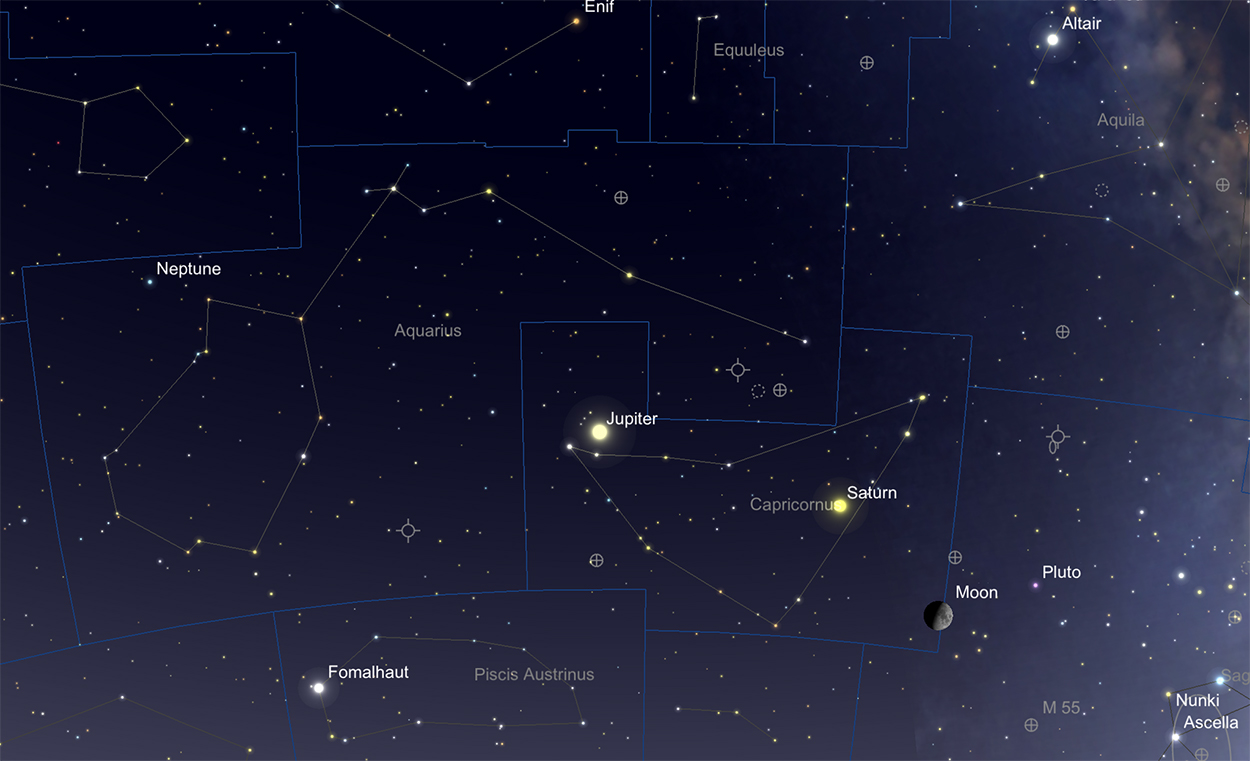 Location of all the visible planets and the Moon from Primrose hill at 21:00. Source: Sky Safari 5 pro

Blazing Jupiter was the first target for the evening.  While a transit of Io would only begin shortly after meeting end and the Red Spot was hidden from view, conditions were relatively stable, and Jupiter presented a fairly sharp image up to around 140x using 4mm setting of my Nagler Zoom.  Several cloud bands were visible along with some hint of turbulence within them, and the Galilean Moons were in a pleasing arrangement with Calisto, Europa and Io in close proximity on one side, and Ganymede alone and more distant on the other.

Offering me an opportunity to share the story of how I proposed (in Namibia with a scope pointed at the most beautiful ring in the universe), Saturn was the next point of call.  Only a few degrees lower in altitude than Jupiter, subtle shading on the planets disc was immediately obvious and the Cassini division was an easy split.  Magnitude +9.2 Titan to the south prompted conversations of hydrocarbon lakes and landers on the solar system’s second largest moon.

The email invite to the BSIA meeting made particular reference to Neptune, so of course a visit to the distant icy giant was requested.  The light pollution and haze made locating the 4.3-billion-kilometre distant world trickier than it should be.  With no setting circles or GoTo, I was forced into a star hop and unable to see either the circlet of Pisces or any of the nearby stars in Aquarius naked eye, I had to start at Markab, the bottom right star of the Square of Pegasus. Placing Markab at the top of the 8-degree field finder, put a small star trapezium of 55, 57, 58 and 59 Peg at the bottom of the field. Moving the trapezium to the top edge then revealed Gamma Piscium. Three degrees southeast was Kappa Piscium. From there moving southwest brought Neptune into view.  Clearly a bit rusty on my central London star hopping, I went wrong twice, but third time was a charm.  While the frozen-blue hue was obvious, at magnifications the atmosphere was permitting, the planet only appeared as stellar rather than a defined disc. 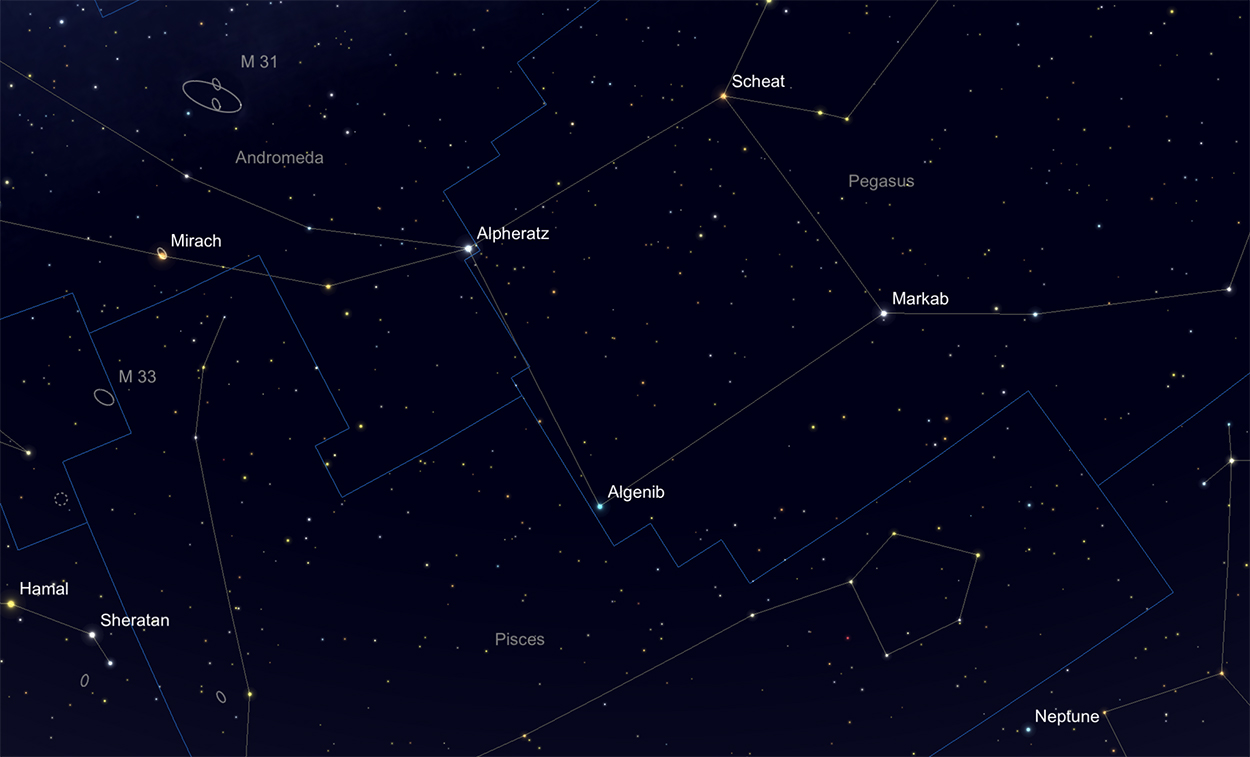 The Andromeda Galaxy is easy to locate from the top left corner of the Square of Pegasus. Source: Sky Safari 5 Pro

Suddenly a voice chimes in, “can we see the Andromeda Galaxy?”  “Of course,” was the retort but I added some emphasis around tempering expectations.  A Bortle class 8/9 sky and a lot of moisture in the air meant transparency was not the best.  We dropped down to the 2.7o field of the 24mm Panoptic and panned the scope over to Andromeda.  While the core of the galaxy was visible, it was very much the “hazy smudge” that astronomers often speak of, and there was no sign of the extended spiral arms.  A quick lesson about averted vision helped some of the attendees glimpse the 2.3 million light year distant galaxy.

Hoping to provide a slightly more spectacular DSO view for the crowd, I swung the scope round to Cassiopeia and using Ruchbah (second star in the “W” asterism) as a starting point, headed down towards Perseus to reveal NGC 869 and NGC 884, better known as the Double Cluster. Tightly framed in the 1-degree field of the 10mm Radian EP, the cluster did lack a bit of the wow factor seen under darker skies, but dozens of stars in each cluster we still on show, including the distinctive horseshoe in NGC 869 drawing the eye. 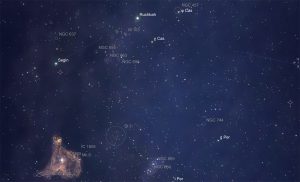 I find the easiest way to locate the Double Cluster under light pollued skies is to hop from Rucbah in Cassiopeia. Source: Sky Safari 5 Pro. (Click for larger image)

After sharing the view with around 10 people, I decided to move from a young object to an ancient one in the form of globular cluster M13 in Hercules.  Using the 7mm Nagler Type 6 eyepiece darkened the sky background and helped to reveal the giant ball of stars to assembled masses.  Slightly more obvious than the core of M31, the GC also benefited from averted vision, with a tight core surrounded by a delicate halo revealing itself with some time at the eyepiece.  However, no appreciable detail within the core or halo was visible.

Needing a bit more of crowd pleaser, the scope was moved back to Cassiopeia for one of my favourite open clusters to be found in any constellation, NGC 457 (Caldwell 13), better known as the E.T or Owl Cluster.  While the two blazingly bright 5th and 7th magnitude stars which are the “eyes” may not actually be cluster members, the head, body and outstretched arms were easily traceable in the 7mm Nagler towards the 2 o’clock position in the eyepiece, and to me at least, gave feelings of being Elliot in the movie when the young alien looks for a final embrace before flying home.

Setting myself up for failure given the lower than ideal transparency, I suggested we try for planetary Nebula M57 in Lyra.  Easy to locate between Sulafet and Sheliak at the bottom of the celestial harp, the remanent of the dead star was definitely pushing the limits of what was achievable that night with a 3” scope.  A small round ghostly apparition was teetering on the edge of visibility in the 7mm, but I am not convinced any of the other irregulars were able to see it.  It was suggested M27 might be a better target, but rather than risk two damp squibs in a row, I took advantage of the closest Messier object now being around 17o above the horizon.

Rising in the east, the Pleiades was relatively easy to spot naked eye, and looked pretty impressive even in the 30mm finder.  The 24mm Panoptic was the only EP I had with me that had a field that could fully encompass the open cluster.  While the large exit pupil meant a relatively light grey background, it did little to reduce the splendour of the seven sisters and the dozens of other attendant stars which form loops, chains, and knots among the easy to spot seven.  Judging by the reaction of those who peeked at the cluster that is one of the DSO highlights of the evening. 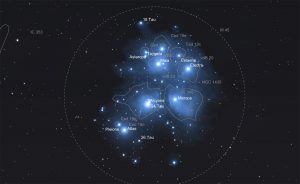 With the suggestion of M27 still in mind, I decided to have another shot at a planetary nebula which hopefully would be glimpsed by other BSIA members.  Albireo in Cygnus and the Dumbell Nebula were at the same 49-degree altitude and separated by the field of my finder.  What should have proved to be an easy hop ended in failure, as the nebula refused to reveal itself.  While I should definitely bring a UHC filter next time, I suspect the increasing moisture in the air, which had resulted in a very damp telescope tube (though fortunately unscathed optics) and an increasing body of mist forming over the damp grass of Primrose Hill had reduced transparency still further.  The FC-76 has pulled this nebula from the London light pollution in meetings past.

Not quite ready to throw in the towel, but needing one to dry off the scope, I decided to show off two more objects in the 20 or so minutes left of the meeting.  First up was Albireo, the wonderful colour contrasted double star with its sapphire blue and topaz yellow components sparkling as always.  Knowing these two are now thought to be just a chance alignment on the sky does little to diminish the view at the eyepiece.

Last DSO of the night was Collinder 399, colloquially known as the coat hanger due to its resemblance to the wardrobe staple.  I used the 24mm Panoptic, which compressed the cluster to better reveal the shape formed by the 10 or so brightest members of the cluster.  Everyone who viewed it, agreed that it took on the form of a coat hanger despite being upside down. 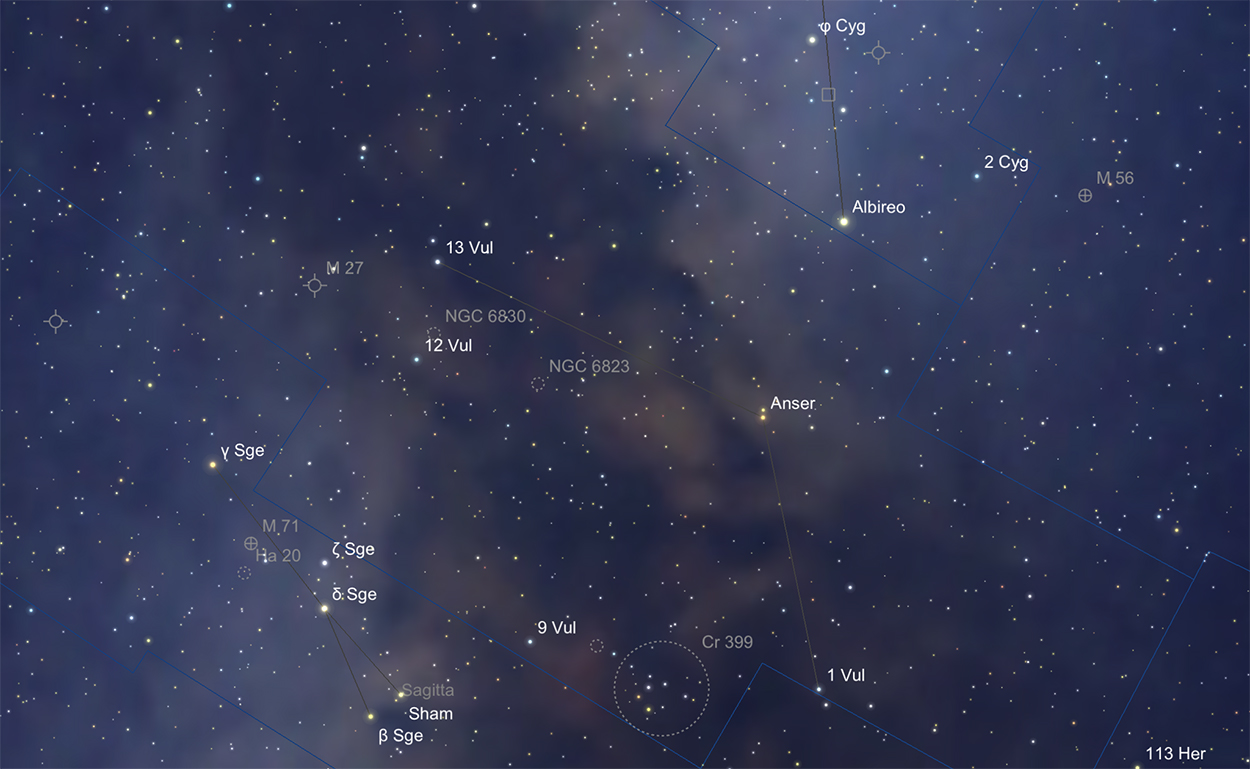 At 10:30pm, the meeting ended, and the telescope and binocular operators quickly packed down before making our respective ways home along with the remaining irregulars.  I certainly had a smile on my face in the taxi ride.  It is good to be back in central London sharing the wonders of the night sky with the Baker Street Irregulars after an absence of a year and half.