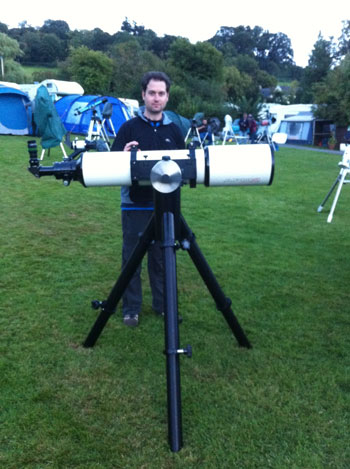 The first sparks of interest in astronomy appeared when I was around 3 years old and asked my mother “what is that?”  I was pointing at the moon.  My fascination with the subject grew from there and thanks to very supportive parents, my passion for all things astrophysical was nurtured as I grew up.  My interest in those early years was very much academic based and I would consume as much information as I could.  In my early teens my desire to witness the beauty of the universe first hand, rather than just from books, developed and up until age 16 my optical aid came via my father’s 10×50 binoculars but then, thanks to a Christmas job I was able to buy my first telescope, a 4.5 inch f/8 Newtonian.  While the optics were not great and the mount was shaky, it opened up the universe allowing me to see for the first time cloud bands of Jupiter, the rings of Saturn and numerous deep sky objects.

As well as enjoying the universe for its beauty, my academic career followed the same path and I left university having studied Physics and Astrophysics graduating with a Master of Physics and Astronomy (MPhys) degree.  I was also a founder member of the University Astronomy society and held the position of president in my last year of undergrad and continued on as treasurer in my masters year.  I realised however, that the reality of what it meant to be a professional Astrophysicist in the 21st century was not for me, so the subject became a hobby once again.

I currently own 6 telescopes, and the list clearly shows that I am a refractor man.  The pride and joy of the collection is a 7.1″(180mm) f/7 Triplet Apo from APM in Germany, as well as 2 smaller Triplets (TMB 115 f/7 and the APM TMB 105 f/6.2 which is my primary travel scope).  I also own two ultra portable Takahashi Fluorite Doublet Apo refractors, the 60mm f/5.9 FS-60CB and the FC-76 objective upgrade which converts FS-60 into a 76mm f7.5 scope.  Rounding out the collection is my oldest scope, the Celestron Nexstar 11 GPS.  I am primarily a visual observer, though occasionally I will undertake video based astronomy using a WATEC 120n integrating video camera and am also experimenting with wide-field astrophotography using a Canon 70D and the EF 14mm f/2.8 L II USM prime lens.

Due to ever increasing work commitments and living in central London, my opportunities to look up decreased after university, but a 4 day stay at the Sossusvlei Desert Lodge in Namibia (which has a 12 inch LX200 and on site astronomer) in 2011 reignited my desire to make the time to observe more frequently, and finding the Baker Street Irregular Astronomers introduced me to many like minded individuals in the capital.

After a second 4 night visit to the Sossusvlei Desert Lodge in 2013 which you can read about in the observing reports section, I am very pleased to have been added to the resident astronomer team, acting as cover for when the other astronomers have alternative commitments.

In late summer 2017, I was asked if I would be interested in contributing equipment reviews to Astronomy Now magazine by the editorial staff.  Having read Astronomy Now on and off for over 20 years, I was of course delighted to provide content for the magazine.  My first review, of the Vixen SG 6.5×32 Binoculars, appeared in the January 2018 issue.