Charlotte and I started dating in the summer of 2010.  Our first big holiday away together was a two week tour around Namibia in September 2011, which culminated in a 4 night stay at the AndBeyond Sossusvlei Desert Lodge.  She sold the whole trip to me on the basis that the lodge had a large telescope and resident astronomer which would allow me to not only explore the southern hemisphere skies, but also from a truly dark sky site.  It is safe to say that we both fell in love with the country, and the Sossusvlei Desert Lodge in particular, tacking on another 4 night stay in 2013 after a holiday in Botswana and Zambia (to give me more access to that scope and those skies), a visit which actually led to me being added to the ranks of the resident astronomer team, with me fulfilling that role for two weeks in Sept/Oct 2014.

When we were thinking about our long haul vacation for 2016 the idea was floated that we visit Namibia for a week and spend most of that time at the lodge.  Knowing that I wanted to spend the rest of my life with Charlotte, it seemed like the perfect opportunity to propose at a venue that means so much to both of us, and under those incredibly dark, star filled skies. 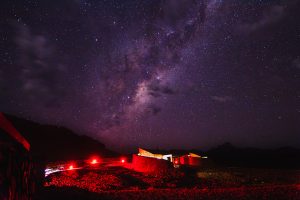 The sky looking east just as I popped the question.

Wednesday June 8th was the fateful day, which saw me using a small telescope I had brought along to compliment the large scope at the lodge as the main prop in the proposal, taking Charlotte on a short tour across the Milky Way from Carina in the west, and ending at Scorpius and importantly Saturn in the east.  Standing on one knee behind her while she viewed Saturn through the scope, as she lifted her eye from the eyepiece I said “I have just shown you the most beautiful ring in the universe, maybe now I can show you the second?”  Luckily for me the answer was “YES!”  Turns out, it is so dark there, that Charlotte could not actually see the ring box, never mind the ring, so we had to go back inside our villa. 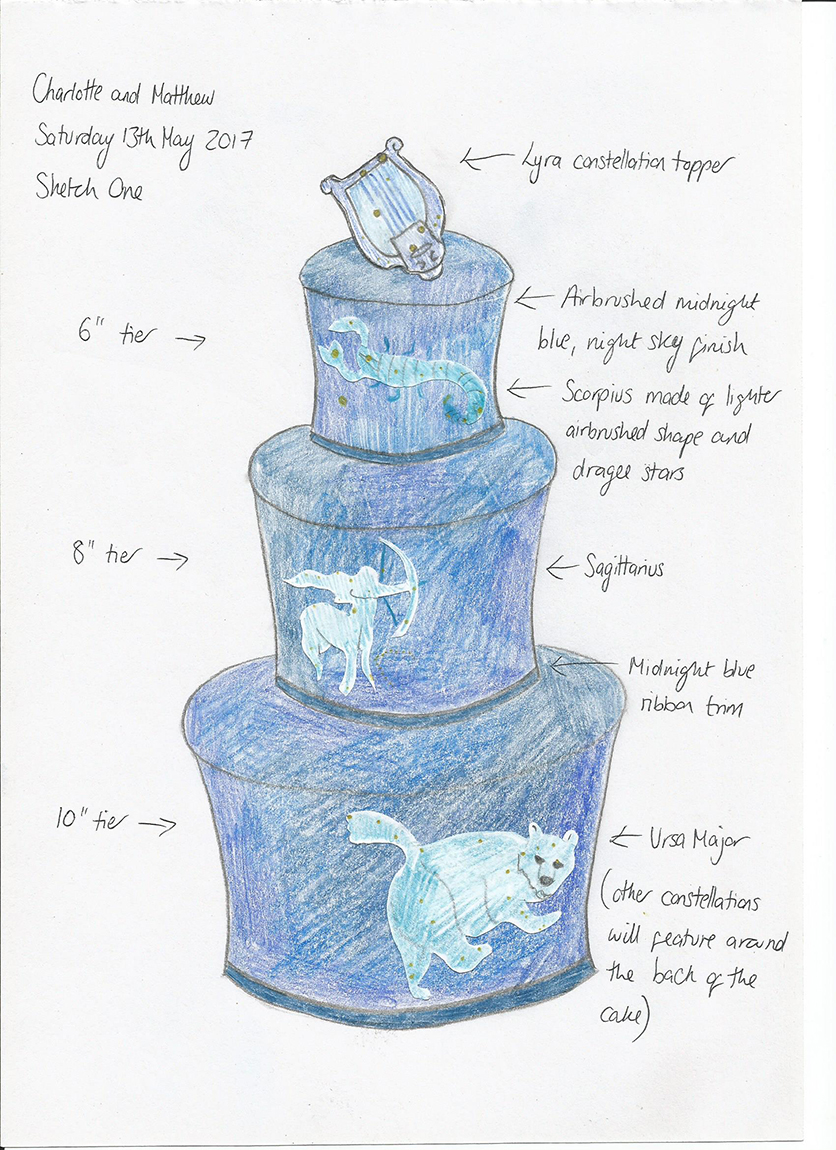 We had decided that since the night sky and astronomy had played such an important part of the proposal, and most of our holidays (Charlotte always checks when new moon is before suggesting dates for a holiday so it will be nice and dark – I am very lucky!), that we would like that theme to continue with our wedding cake.  Our thoughts were perhaps to include several of our favourite constellations on the cake, either as classical mythical Greek representations or more modern stars and lines.  We went armed with a bunch of screen grabs from Sky Safari 5 including Scorpius, Orion and Ursa Major, unsure of what might be possible in the world of cake-craft.  Charlotte White suggested that we could include both!  We left the cake consultation with lots of cake samples to try (in the end we chose Chocolate for the bottom tier, lemon for the middle and red velvet for the top) while Charlotte would sketch out an idea to share with us.  We were blown away by that sketch.

A blue wedding cake is perhaps a little unusual, but as you will see below, the effect was quite stunning.  To avoid affecting the flavour profile of the icing, the cake was decorated with an airbrush with white icing as the canvass.  Light shades of blue and purple were swirled over the icing and allowed to dry before templates of the constellations were fixed to the cake, before numerous layers of dark blues and purples were built up to create the deep night sky finish.  Then removing the templates allowed for the lighter shapes to be detailed with dark blue edible paint.  Each constellation was then marked out with gold dragees in the place of the major stars of each constellation. 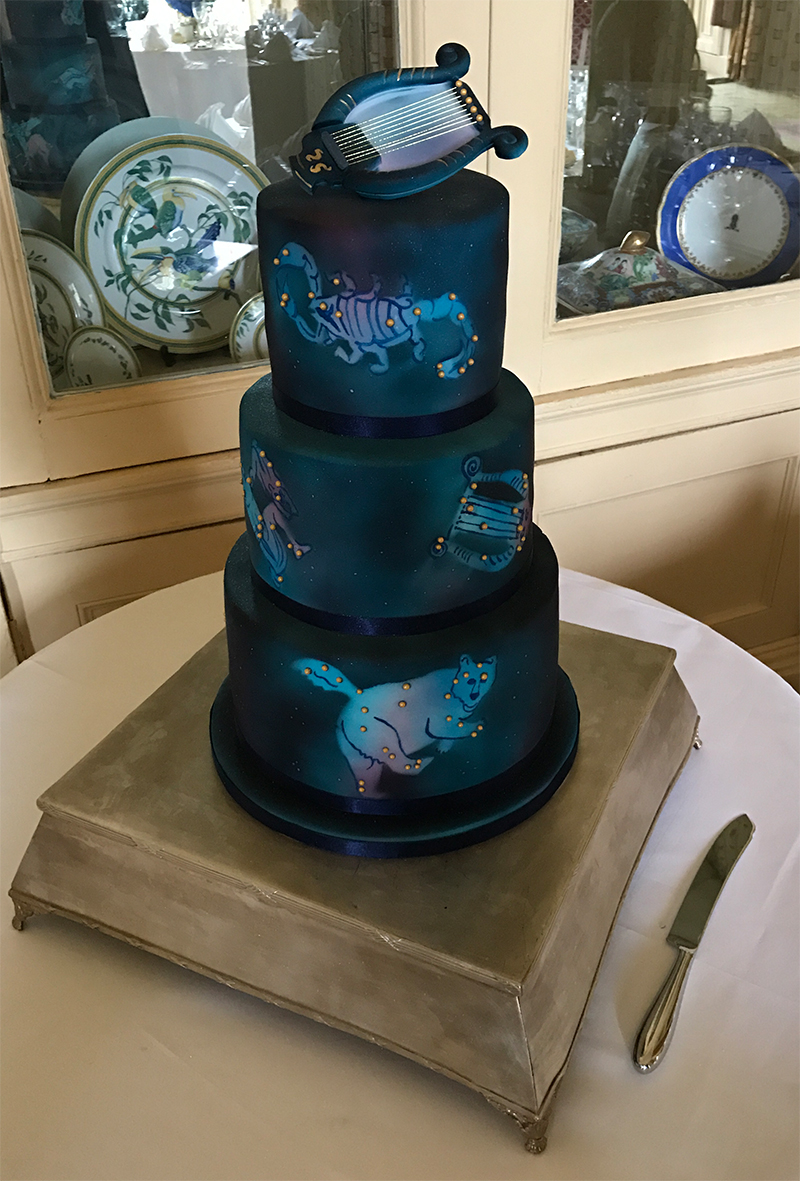 The wedding cake before the ceremony.

The wedding cake topper was formed from sugar craft in the shape of Lyra (naturally!) and really set off the cake.  Charlotte’s husband actually delivered the cake on the big day and used an edible glitter pump to add an extra little bit of starry sparkle before all the guests saw the cake. 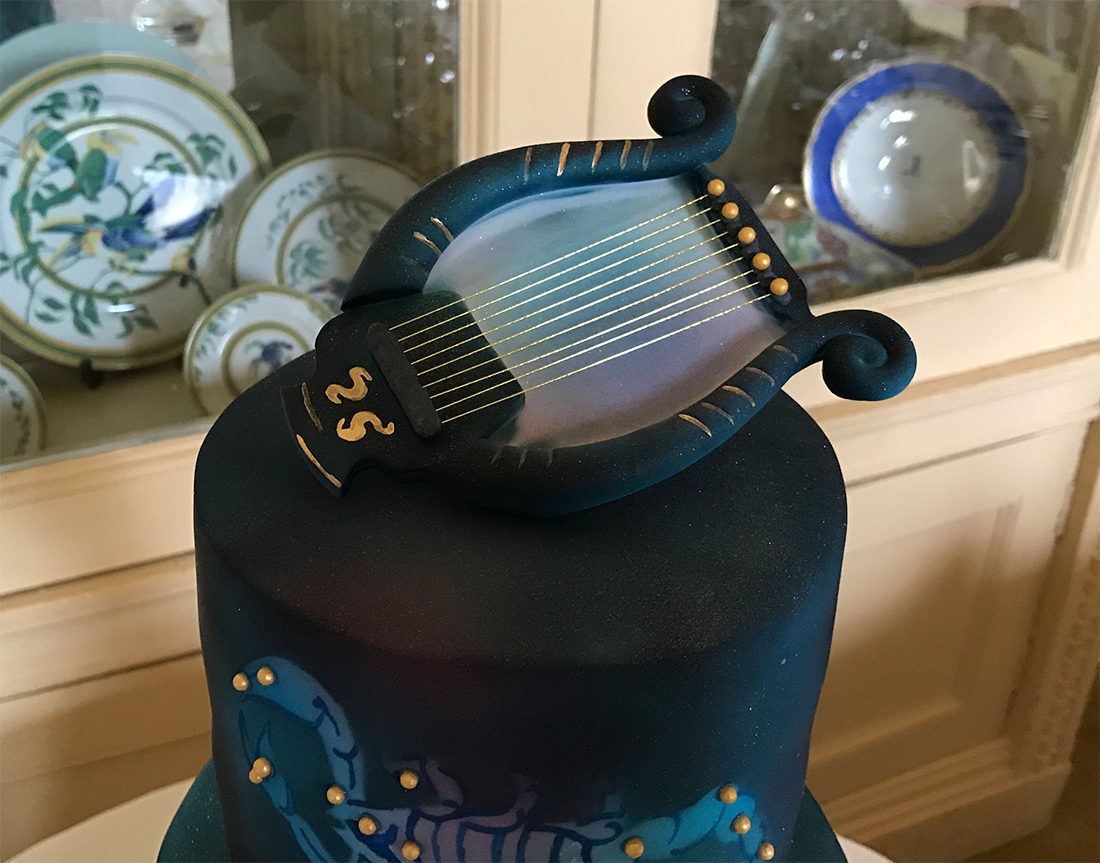 The sugar craft cake topper, made in the shape of Lyra.

Most importantly it was absolutely delicious!  We were rather pleased the whole thing was not demolished by our guests as it meant we got to enjoy a piece of cake each night before we left for our honeymoon five days later. 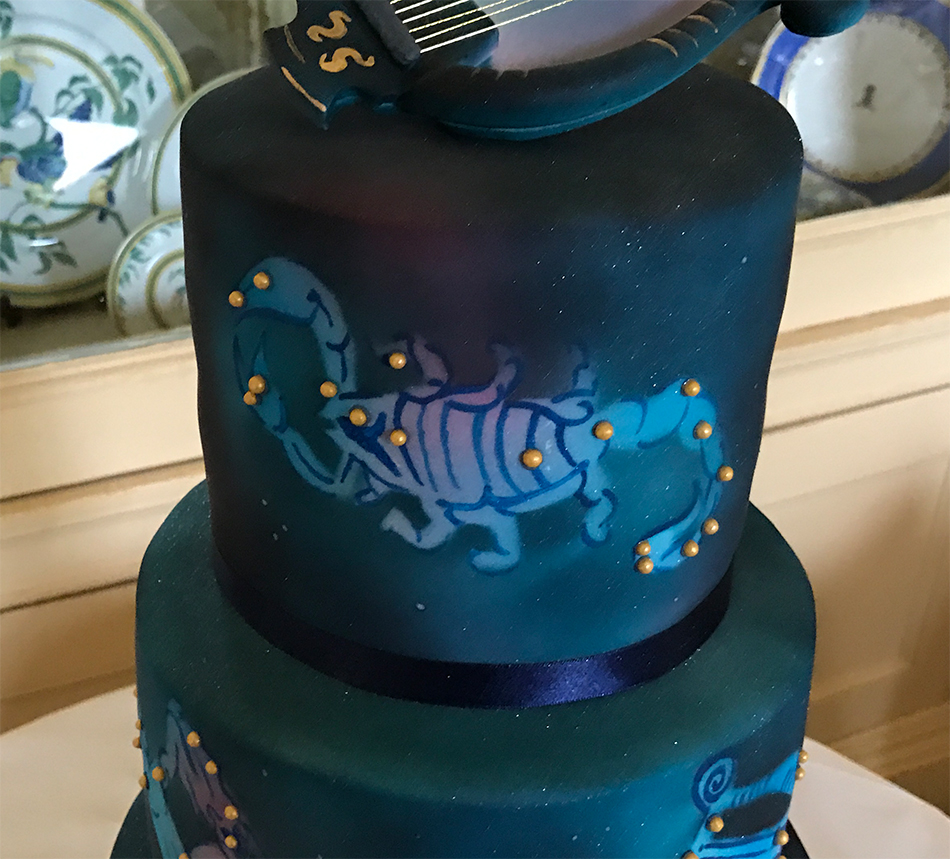 Scorpius rising. Given this is the constellation where Saturn was positioned when I proposed, it is fitting that it is on the top tier. 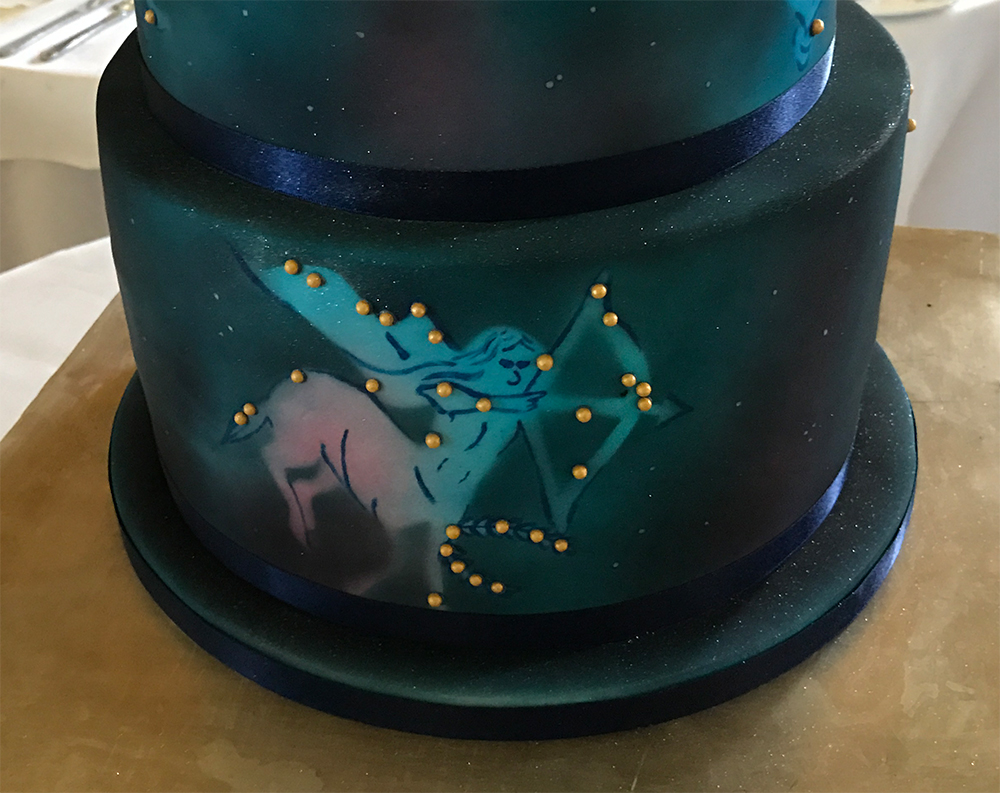 Hidden around the back, Sagittarius with his bow, 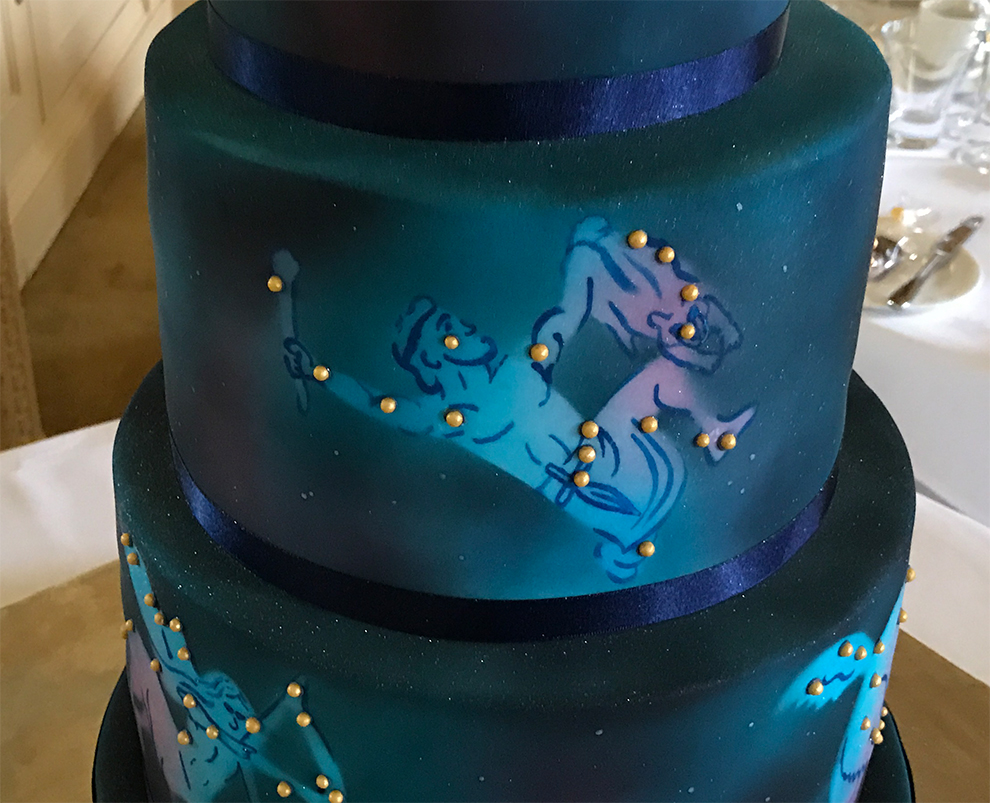 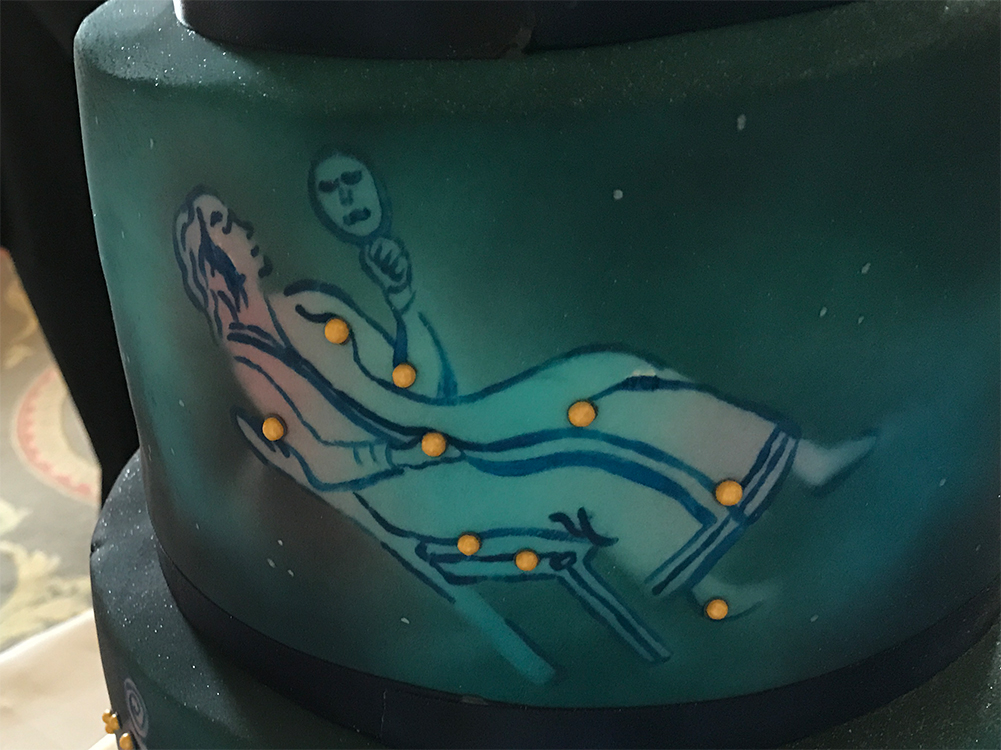 Another one hidden around the back, Cassiopeia. 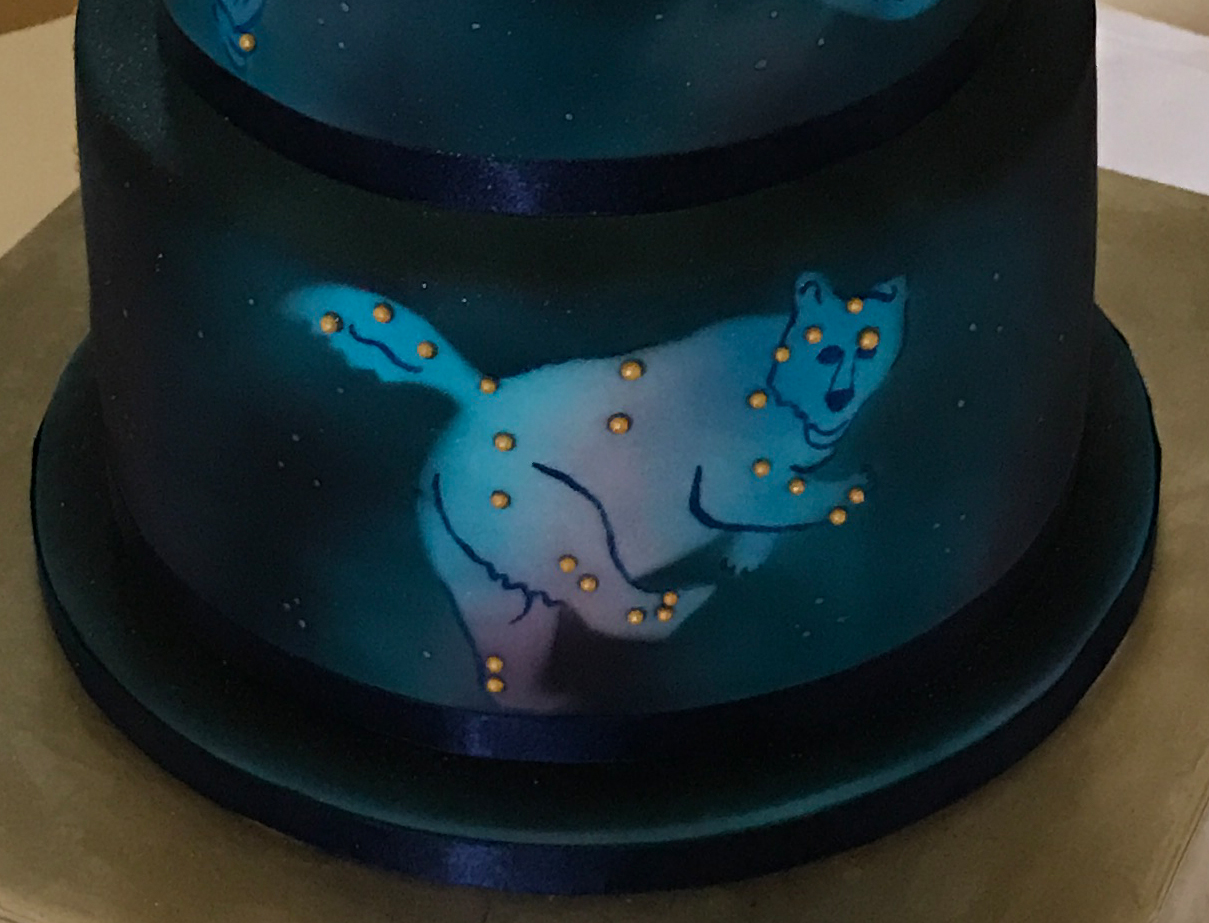 We would not hesitate to recommend Restoration Cake to bake something amazing for your special occasion.  You can find them on the link: http://www.restorationcake.com/