Spend no more than a few minutes browsing any online astronomy-forum and you will stumble across a post either extoling the virtue of an optic or rubbishing one.  While the reality is that atmospheric distortion will more often than not be the limiting factor for the performance of a telescope, in those moments of exceptional seeing, the optical system is only as strong as its weakest component, whether that be the objective, the eyepieces, Barlow lenses, or diagonals. 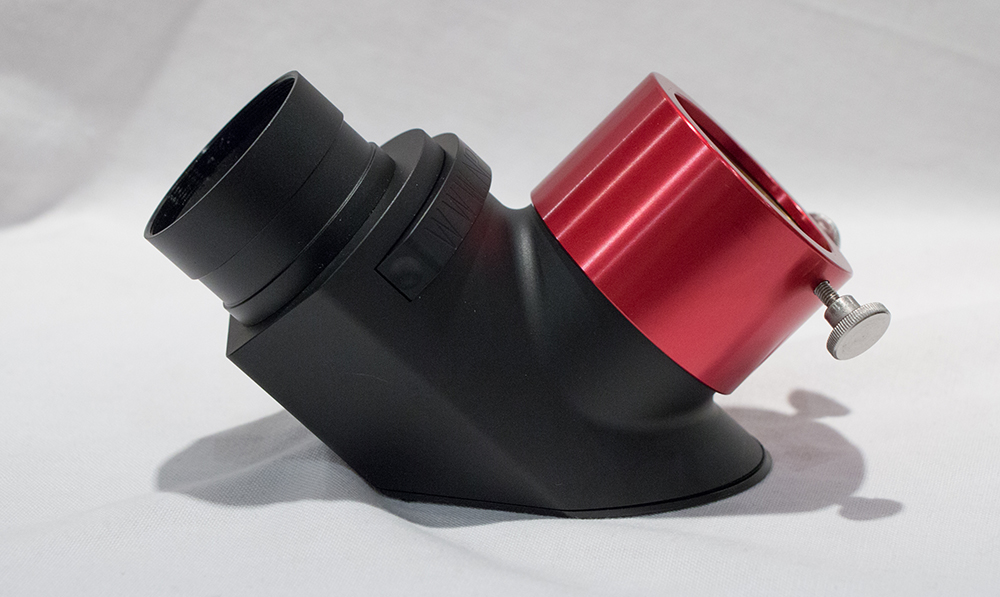 The 2″ nPAE Theia90 star diagonal with built in filter changer.

Continuing the thoughts about online forum posts, there are plenty of threads about the quality of refractor lenses, or Newtonian mirrors, as well as different eyepieces, but very little comes up about diagonal choices.  Any optical component between the incoming wave front and your retina will have a degrading impact, it is just a case of how little impact it has.  So, it is perhaps quite surprising there are not more questions about diagonal choices.  One or two skilled visual observers have run compare and contrast analysis of multiple diagonals, and differences, though sometimes subtle, were noted.  As such, for observers wanting to see every last piece of detail, every low contrast feature, the diagonal choice is important.

A 21st century amateur astronomer also has to battle other impediments in pursuit of observing those faint fuzzies, thanks to light pollution, and planetary observers are always struggling to tease out delicate low contrast planetary features.  Fortunately, our observing arsenal also includes specialist filters, such as narrowband UHC or OIII, Wratten colour filters to enhance planetary features, or solar continuum filters, enhancing granulation on the photosphere of the Sun (with appropriate front surface energy rejection filter).  However, this means screwing and unscrewing filters either into the bottom of eyepieces or the nose of a diagonal.  If like me, you have a rather scattergun approach to observing, which will see a multitude of objects targeted in just a few minutes, this can become a tiresome task. 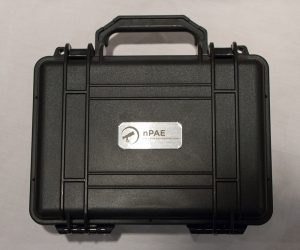 The mini Cerberus case, useful for storing the Theia90 but also very robust, keeping it safe during transport.

Now a recent entrant in the landscape of astronomical equipment accessories, nPAE (short for Nottingham Precision Astro Engineering), has launched a 90o star diagonal with built in filter changer, which may marry the need for a quality star diagonal, with the ease of a drop in, pull out filter changer.  Having already extensively tested their rotating medium eyepiece turret (you can read the review of the 6061 Medium Turret here) in the past, I had high hopes for the new product, and was especially excited by the incorporation of a filter changer, which was my favourite feature in the turret.  nPAE was kind enough to lend me diagonal for testing for a couple of months.

The Theia90 diagonal
The Theia90 star diagonal ships in a mini Cerberus case, which not only protects the diagonal during transit but keeps it safe when not in use, as well as providing easy storage for the included ancillary components.  One could argue that it is perhaps a bit of overkill, but at £295 list price, I certainly appreciate the efforts nPAE have taken to ensure the equipment they supply is well protected.

First impressions of the diagonal itself are very favourable, looking like a solid and well-engineered piece of equipment.  It is certainly rather eye-catching with red livery on the 2” eyepiece holder with two large thumbscrews engaging a non-marring brass compression ring.  Like many high quality diagonals available on the market, the Theia90 does not come with a 2” to 1.25” eyepiece adaptor, so I utilised a Baader twist-lock adaptor during the review period. 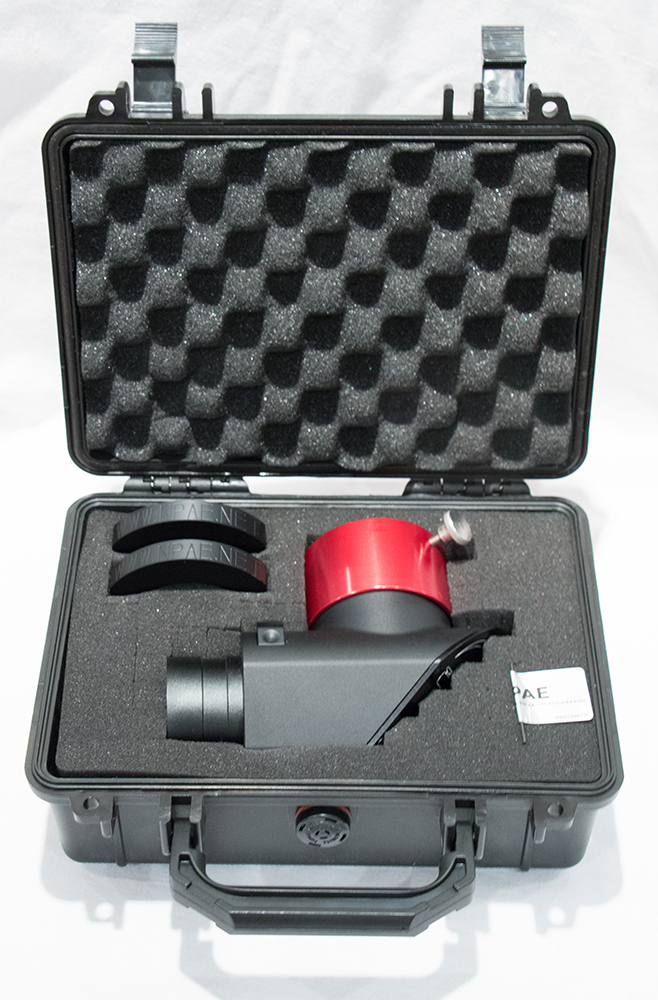 The supplied 2″ diagonal, three filter changers and Allen key are all supplied in the Cerberus case. The instructions and optical certificate are hidden behind the foam insert in the lid.

The inner structure is painted flat black to minimise internal reflections, and in use I noticed no difference between the Theia90 and other diagonals in my possession that have additional micro baffles, in off-axis stray light control, when placing a last quarter moon just outside the field stop.  However, in the studio, using a quite intense white light headlamp did reveal an increase in internally scattered light.  The nosepiece itself is also threaded to accept a 2” filter, so in theory, one could triple up filters with one screwed in to the eyepiece, one in the filter slot and the third at the nose end of the diagonal.  While it is difficult to conceive a real-world application for that, having the flexibility is always useful.  The nose also has a safety undercut. 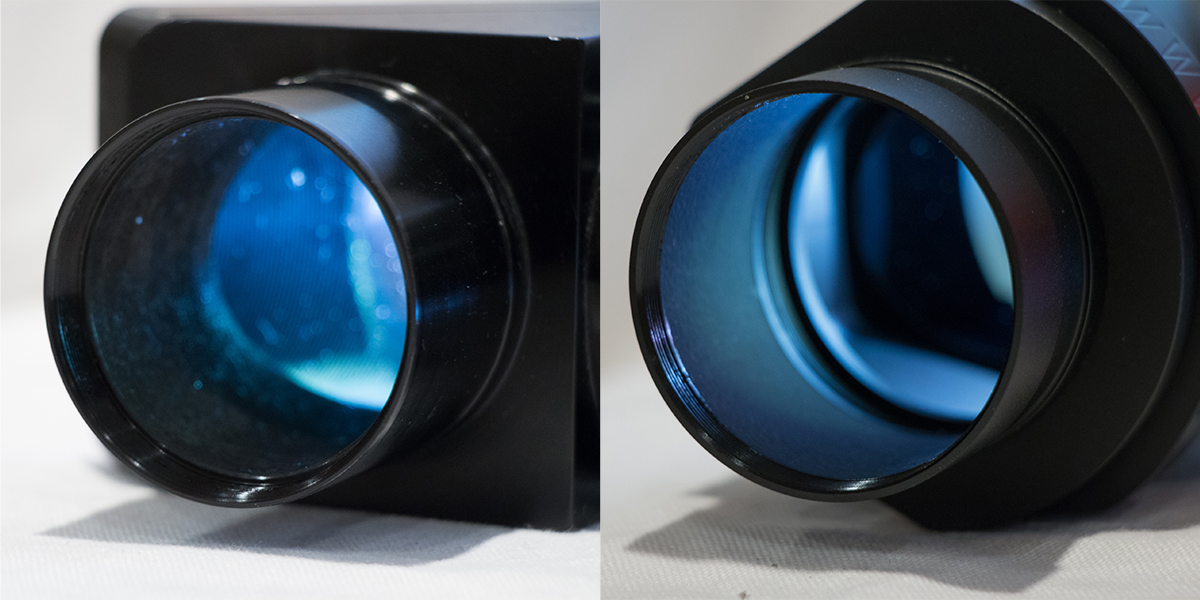 Using the bright white light on my headlamp off-axis to compare stray light suppression, with the TeleVue Everbright on the left, and Theia90 on the right. Brighter internal reflections in the Theia90 were not seen under the stars.

The three supplied 2” filter holders use M48X0.75 thread accommodating filters up to 10mm thick.  When observing without a filter, an empty holder should be inserted in the slot to prevent stray light entering the diagonal.  Strong magnets are employed to secure the filter holders in place so there is no risk of it tumbling out if your equatorially mounted scope finds itself in a contorted angle.

The diagonal mirror used is provided by Galv Optics and is guaranteed 1/10th wave with 99% reflectivity.  An interferometry certificate (testing by Orion Optics in Crewe) is provided for the mirror which provides some confidence that the quoted specification has been delivered.  The mirror itself is oval, which is unusual in the world of star-diagonals, but it actually makes quite a lot of sense to utilise mature Newtonian flats fabrication facilities to provide the mirror. 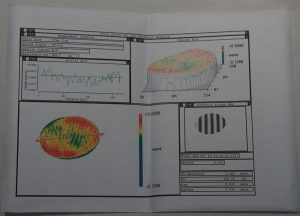 The optical test certificate provided with the review sample of the Theia90.

The rear of the diagonal boasts a nicely engraved back plate which also has 4 small hex screws which can be used to adjust collimation with the supplied Allen key.  Using the long baseline of my 1260mm focal length triplet refractor which had recently been checked by APM, I tested the collimation of the diagonal multiple times using 3 different Cheshire eyepieces and a Takahashi collimating telescope to eliminate any user and fabrication errors.  Simulating real world conditions, the focuser on my scope was racked out halfway.  I found that the diagonal had arrived slightly out of alignment, perhaps taking a bit of knock while in transit with the courier.  However, just a couple of minutes later with some minor adjustments of the screws, I had the mirror orthogonal.  The alignment was maintained throughout the review period.

The inclusion of the filter holder itself does increase the path length of the Theia90 diagonal, with the obvious consequences for required back focus.  I measured the path length to be 140mm, which matches the quoted specifications from nPAE.  For reference, I measured the path length of four other 2” diagonals I own and found them all within a range of 102-112mm.  This difference was not a problem for me as all my scopes have plenty of back focus, in some cases more than 200mm, but any potential buyers need to keep that in mind. 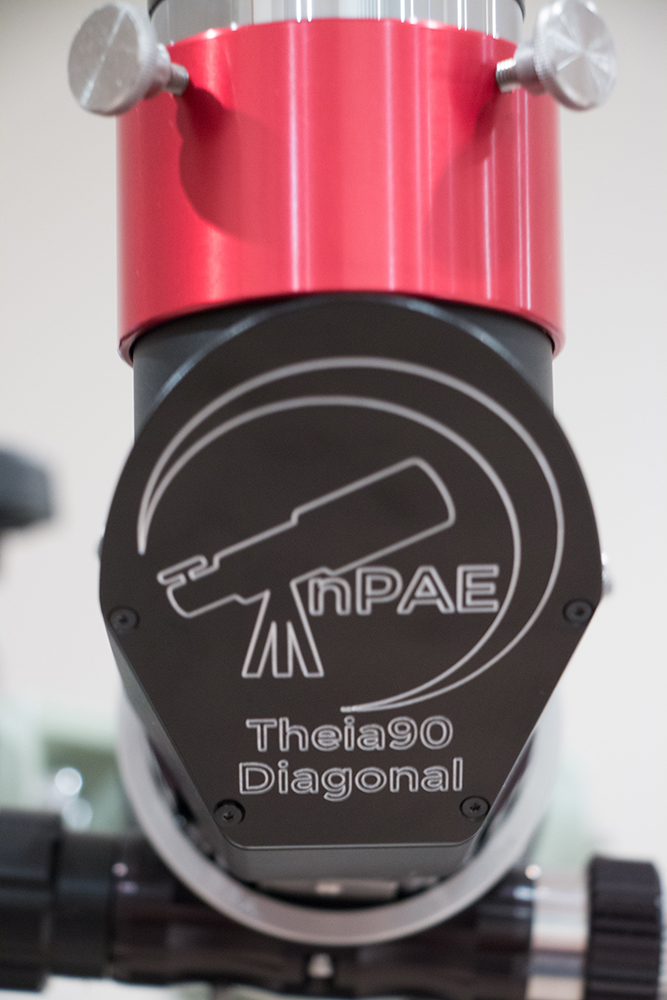 The attractively engraved back plate with 4 hex screws used to adjust alignment of the diagonal mirror.

The extra path length and filter holder does add slightly to the weight, at 545 grams, but this was only about 100 grams more than another star diagonal in my collection, so there should be no introduced balance issues when in use. 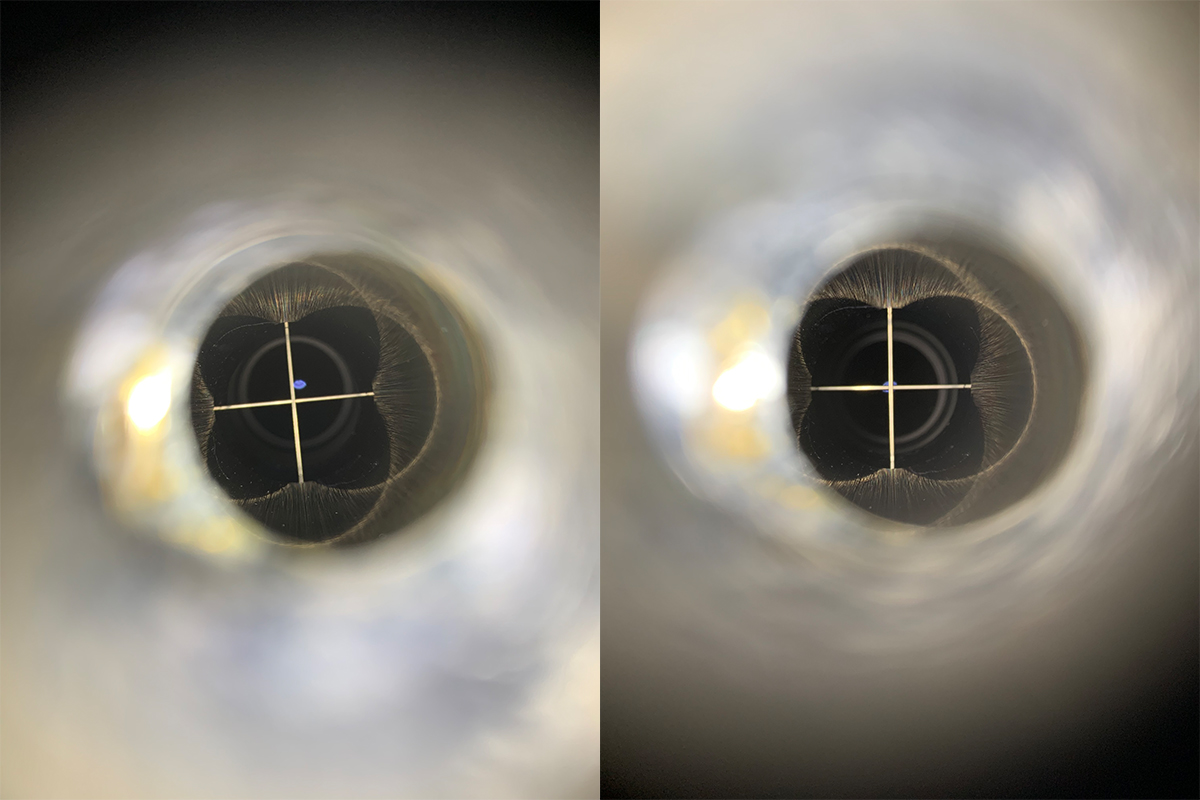 Comparison of the the image seen through a Cheshire eyepiece, with the before on the left, and after I adjusted the collimation on the right. Photo taken with my iPhone XR.

Under the Stars
To assess the quality of the mirror, I ran a direct comparison against the diagonal I use most frequently in my collection, attempting to assess any differences in range of factors which can impact image quality.

Using Jupiter and a third quarter Moon, I evaluated scatter around the object which can diminish the visibility of low contrast surface features.  If there were any differences in brightness and extent of the scatter (measured against the position of the Galilean satellites), I was unable to see it.  Also viewing a couple of fairly tight double stars including Propus in Gemini, I was able to split the double at the same magnification, and the space between the pairs appeared to have the same tone.  Sharpness of image and visibility of low contrast surface features on Jupiter were equally easy (or difficult) to see using each diagonal.

The three supplied filter holders with my 2″ 1000 Oaks Optical UHC filter screwed in.

A similar result was achieved when considering colour rendition.  Colours in the night sky are typically muted hues, especially surface features on the planets, but some stars such as Albireo and Almach show rather intense colours.  Using these as targets along with the GRS on Jupiter, I was unable to detect any differences in colour representation.

To assess brightness of the image, I used the Double Cluster in Perseus to spot the faintest star possible in the twin open clusters.  Each time I thought I had found a dimmer star using one diagonal, I was then able to locate it in the other.

All these tests lead me to conclude that mirror in the Theia90 is of high quality and very much the equal of other quality, highly reflective mirror diagonals.  The minor axis of the mirror is 46mm, and I was unable to detect any vignetting of the image when using long focal length, 2” eyepieces.

Just as with the medium turret, I particularly enjoyed the filter holder feature.  The ability to switch magnifications on the fly to have a closer inspection of the DSO I was viewing while leaving a filter in-situ was really a boon to my observing and I found myself switching eyepieces more often on individual objects.  Additionally, the ability to pull out a filter quickly to observe another feature within the same DSO that is diminished by the filter, such as the open cluster in the Rosette Nebula, also proved helpful. 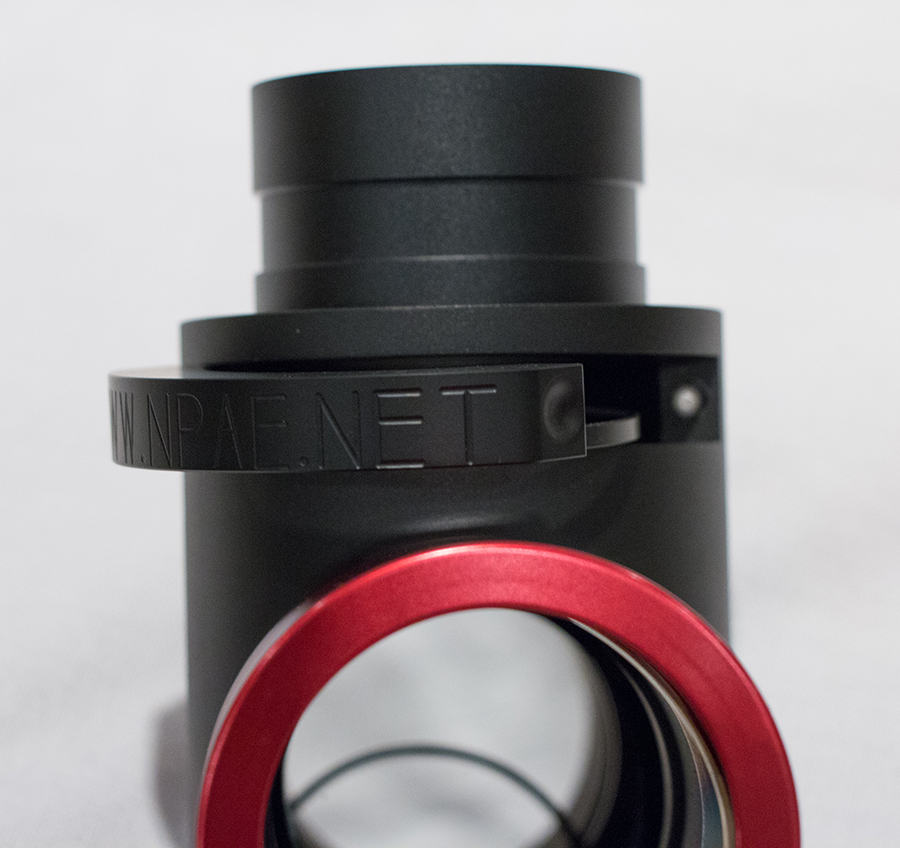 The Filter Slot will accommodate filters up to 10mm deep.

Testing of the diagonal occurred during late Summer / early Autumn so I was unable to assess time required to reach thermal equilibrium.  Just as with the main telescope itself, acclimatisation is important, with diagonals known to introduce minor astigmatism as they cool.  However, even the most robustly built star-diagonals take no more than 10-15 minutes to cool when taken into a frigid night from a warm house, so typically the main OTA will be the cooling bottleneck.

Conclusions
The Theia90 diagonal is a well-designed and fabricated astronomy accessory.  The mirror is high quality and proved the match of my own high-quality star diagonal.  The filter changer really is very useful, complimenting observing activities and with the ability to drop in or remove a filter in seconds, I found myself using them more often on a night of observing than I typically do.  The ability to easily collimate the diagonal is also a desirable feature, should the unit ever take a knock. 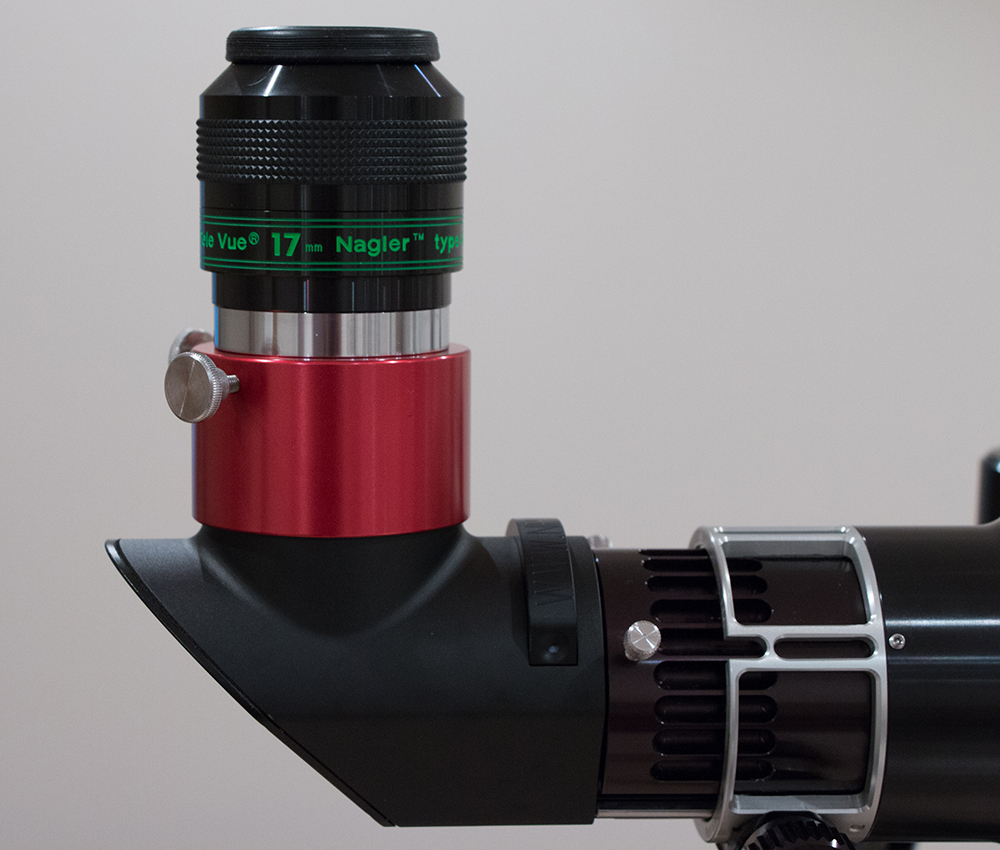 With a path length of 140mm, which is as much as 38-40mm more than many 2″ diagonals, users will need to consider available back focus.

The list price is £295 which is quite a lot for diagonal, though I would recommend you shop around as a cursory internet search revealed some lower prices.  However, I would argue that it represents decent value as quality diagonals can easily exceed £250, and the Theia Filter changer (with 3 filter holders) can also be purchased as standalone unit for £185, so the aggregated unit actually works out cheaper than buying components separately.