Astronomy is a hobby where conditions are not always the easiest to deal with.  Unless you are lucky to live in more temperate climes (stargazing in Namibia in shorts and t-shirt really is a good as it sounds), the cold and damp can be a real issue and necessitates appropriate clothing choices as well as dew prevention equipment to avoid a premature end to a night of stargazing.  While it may sound obvious, it also needs to be dark, which comes with its own challenges and pitfalls.

Protection of dark adapted vision is of paramount importance, yet an astronomer still needs to be able to see what they are doing, whether it is switching an eyepiece, reading a star chart, taking down a telescope at the end of the night, or just navigating around a star-party.  There is no quicker way to make yourself unpopular than by flashing a white light torch at a gathering of astronomers and I have lost count of the number of wandering stargazers who have fallen foul of a guy-rope on a campsite.

While a number of red light torches are offered by some of the mainstream astronomy companies, often offering the ability to switch between red and white light, as well as controlling the intensity, there seems to be a lack of dedicated headlamps suitable for astronomy use.  While I am happy to use a torch, a headlamp offers one key advantage and that is leaving both hands free, useful under all circumstances but especially so when packing down at the end of an observing session. 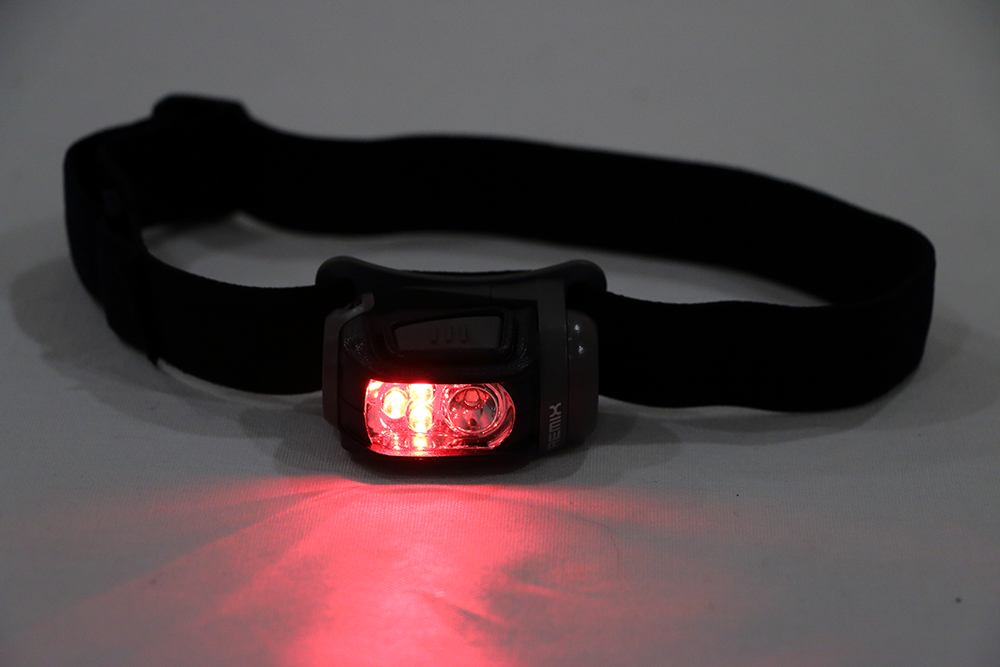 My last purchase of a headlamp a few years ago proved to be completely useless for astronomy.  Switching on the lamp caused the lowest intensity setting of the red light to engage.  However, to turn off the lamp required additional presses of the same button which caused the lamp to cycle through several increasingly intense red settings before finally a bright white light ruined any stargazing for next 30 minutes or more and probably left you with no friends on the observing field.  Some do-it-yourself solutions such as red nail polish could have been used to fix this problem, but there are circumstances where one might need a bright white light and cycling through several intensity settings is hardly ideal.

With the star party season upon us, I spent some time searching the internet hoping once again to find a suitable headlamp when I stumbled across the Princeton Tec Remix Red LED Headlamp.  The purchase price was £37.99 from “We Sell Electrical UK” via the Amazon marketplace.  I placed the order mid-afternoon on a Monday, it was dispatched the following day and took two days to arrive.

The Princeton Tec Remix is supplied with the light-unit and headband in separate plastic compartments mounted between two pieces of card, which means the packaging is destroyed when removing it, along with 3 AAA batteries needed to power the unit. 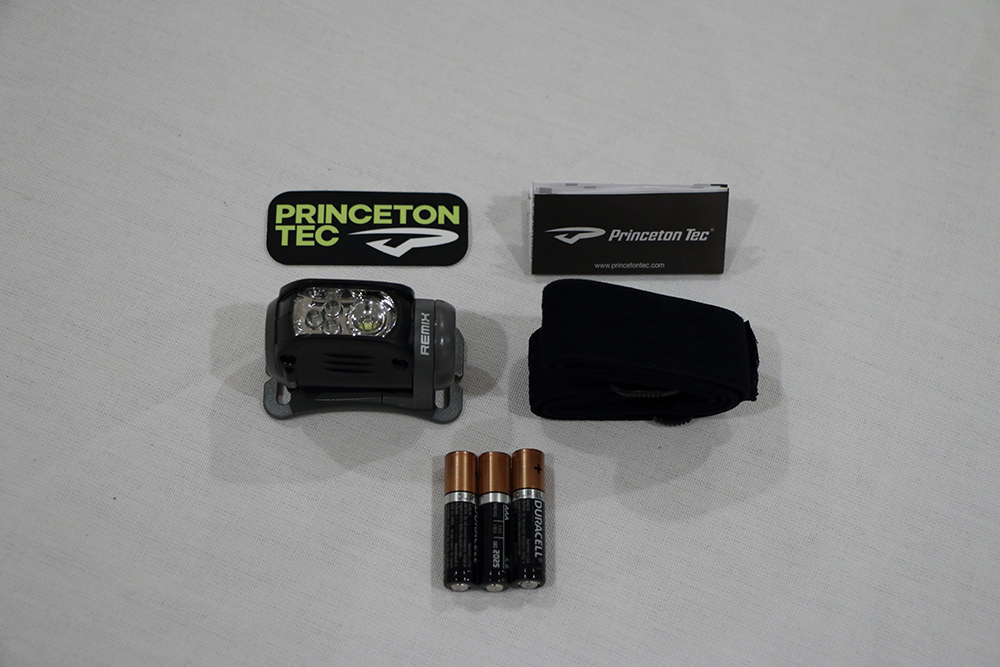 What is in the box? Sticker, Instructions, Headlamp, Head strap, and 3 x AAA batteries.

The Princeton Tec Remix is entirely constructed from plastic and looks pretty solid compared to other headlamps I have used in the past.  Crucially though, even with 3 AAA batteries installed, the entire lamp and headband only weighs 83 grams and is quite compact, only extending 45mm from the forehead so you will avoid looking like an extra from a cheap Sci-Fi B-movie.

The unit’s water resistance rating is IPX4 meaning it has been tested to withstand splashing water from any direction for a duration of 5 minutes.  While astronomers do not really need to worry about rain as it is delivered by clouds and we should be tucked up in bed catching up on some much-needed sleep, it does mean that even the most damp, dewy nights will not cause the headlamp to short out.

The business end of the unit contains 4 LEDs, three red and one white.  On top of the unit is a fairly large, rectangular button with three ridges which makes it easy to locate, even while wearing gloves without having to fiddle around to switch it on.  Rather usefully, the unit is not locked into position, with the ability to direct it via a number of click-stop positions enabling illumination of a star chart without having to point one’s head straight where the light is required.  The range of motion covers approximately 100 degrees around the horizontal though it is rather stiff and I found two hands were required to point the unit.

Most crucially from an astronomer’s perspective, the default light setting is low red when first switched on, regardless of the previous setting used.  This alone is almost worth the price of admission, protecting against accidental white light illumination of an observing field, unfortunately something I have seen many times.  To engage the higher intensity red setting, after switching on the unit a second depression of the button is required within 1.6 seconds.  Another button press after this will switch off the light.  Almost acting as another safety feature for astronomers, to actually select white-light illumination, the button has to be depressed and held for two seconds before the low white light setting activates.  You then have 1.6 seconds to click the button to trigger the high beam setting.  Another click after this switches off the unit.  It is very simple to use and I have not had any accidents which would reduce my popularity on the observing field.

While many astronomers mistakenly believe that red light is the panacea to night-vision protection, all light sources have an impact on dark adaptation, just some wavelengths less so than others.  As such, intensity is also very important. I own one red light torch which is just too bright to use at star party unless the batteries have been used for many hours.  This is perhaps the main weakness of the Remix.  The low setting is certainly not blindingly bright by any stretch but I definitely would not have objected to a slightly lower lux rating.  With fresh batteries, it is just a touch brighter than the maximum setting of my Sky-Watcher LED Night Vision torch.  Even better would have been an analogue control for user adjustment of the brightness.  If Princeton Tec or any other headlamp manufacturer would like to add that functionality, there would no doubt be a legion of amateur astronomers queuing up to purchase the lamp, this reviewer included.

The illumination on the low red setting is reasonable well concentrated with just a dim halo of red light extending away from where it is directed.  At a distance of around 90cm, which would be a typical distance the headlamp might be from a star atlas when reading it, the primary illuminated area has a diameter of 45cm, which covers my A3 sized Sky Atlas 2000. 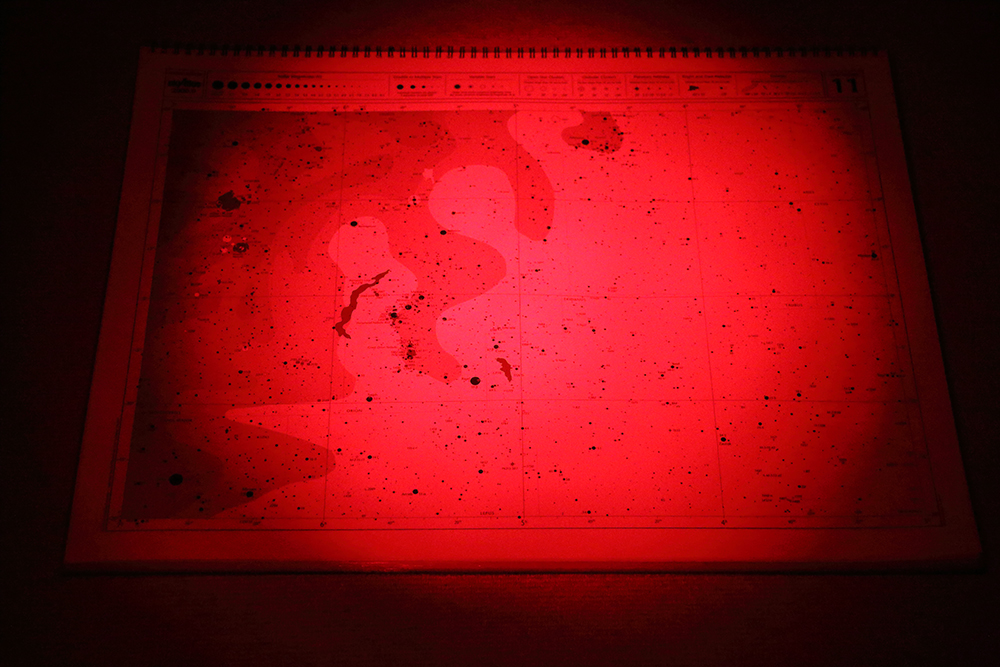 The laminated A3 Sky Atlas 2000 Deluxe Edition illuminated on low setting at a distance of 90cm distance, ISO 6400, 1/30 sec at f/4.5 which was a close approximation to what was seen visually.

The red-light high setting is too bright for any normal astronomical use, though it is a nice option to have available in the hunt for a dropped piece of equipment.  It is amazing how well camouflaged an eyepiece lens cap is against grass, just be polite and warn everyone around you that you will be using a bright red light before switching it on.

The headband is easy to adjust and is comfortable to wear for extended periods without the need for extra padding that some headlamps sport.  Battery life is also good.  Manufacturers claimed “burn time” does need to be taken with a pinch of salt (especially in the context of the high beam settings where it is often quoted until the lux has dropped to 0.25, the equivalent of a solitary candle at a distance of two metres, hardly enough light to follow a trail), but here the low setting operation time is very good.  Princeton Tec state 200 hours.  I set up a test with the lamp set at a distance of 85cm from a target as seen in the accompanying photos, and left the light on for 72 straight hours.  A photograph was taken once every 24 hours, starting with fresh batteries, with the settings at ISO6400, 1/30th of a second, showing the decline in brightness.  I felt the light was far more appropriate for astro use after 24 hours but still quite usable at the 72-hour mark. 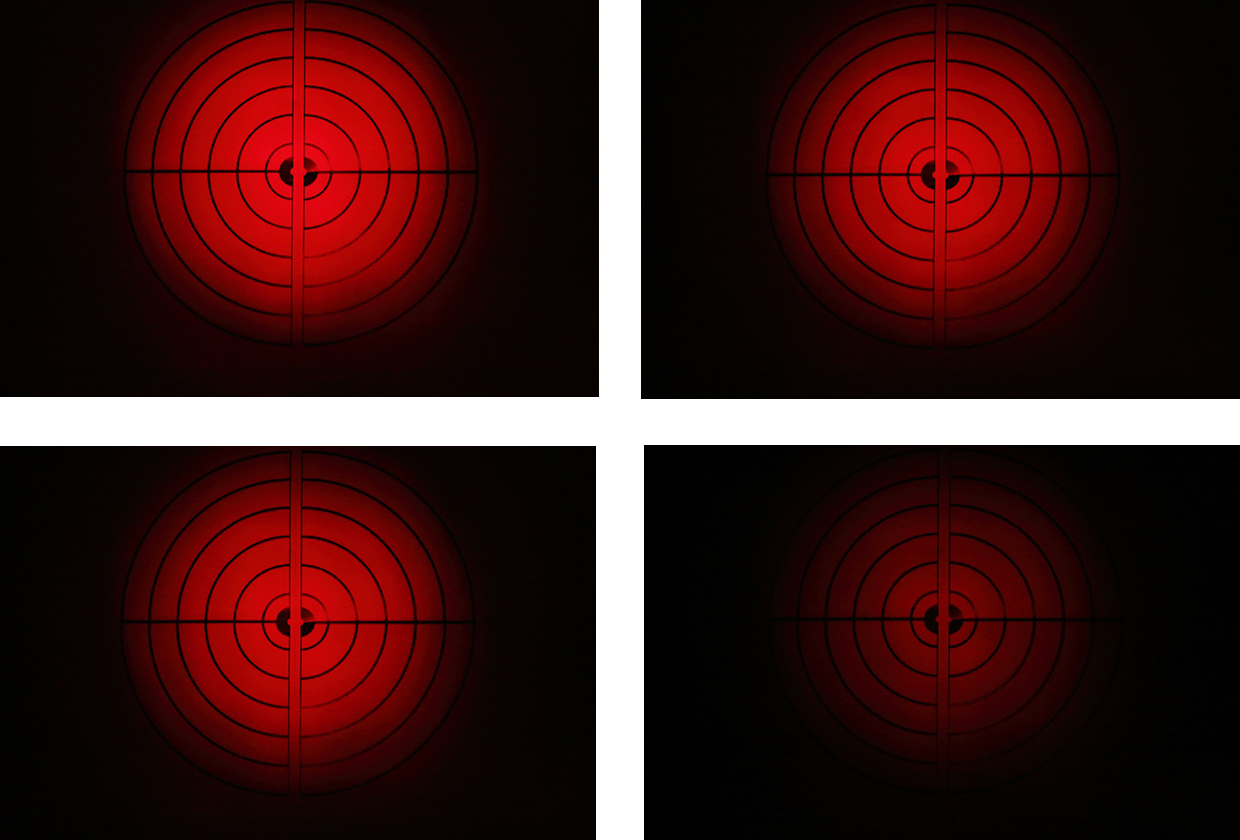 Conclusion
I am quite pleased with my purchase of the Princeton Tec Remix.  The headlamp is light weight and comfortable to use for extended periods.  The only real weakness is a slightly brighter than I would like, but still acceptable, low red setting which would be much better if there was analogue control over the intensity.  This slight shortcoming is more than compensated for by the control system which acts as a safety feature for astronomers, preventing accidental engagement of a bright white light and always activating on the low red setting regardless of mode used previously.  Aggregating the positives and negatives leads me to conclude that the Remix is a solid choice for an astronomers’ headlamp.

There are also white light only and green light models so be sure to select the correct red light model when ordering.