On Saturday June 29th 2019, I took an overnight flight from London Heathrow to Johannesburg in South Africa for a two-week island vacation in Mozambique.  I had packed a small telescope and a widefield camera lens to take advantage of the Bortle Class 1 skies on the island, and fortunately had the equipment in the cabin with me.  After dinner the cabin lights were dimmed and most passengers it started to drift off to sleep, but not me.  I could not resist some stargazing out of the window.  At this point we were located somewhere over north Chad and it was rather dark and the view quite beautiful.

I grabbed my camera and a small tripod out of the overhead bin and managed to precariously balance the camera across my tray table and a narrow ledge under the window.  I had a choice of 3 windows with my seat but one was very dirty, another badly scratched, while the third was passable and would have to do. 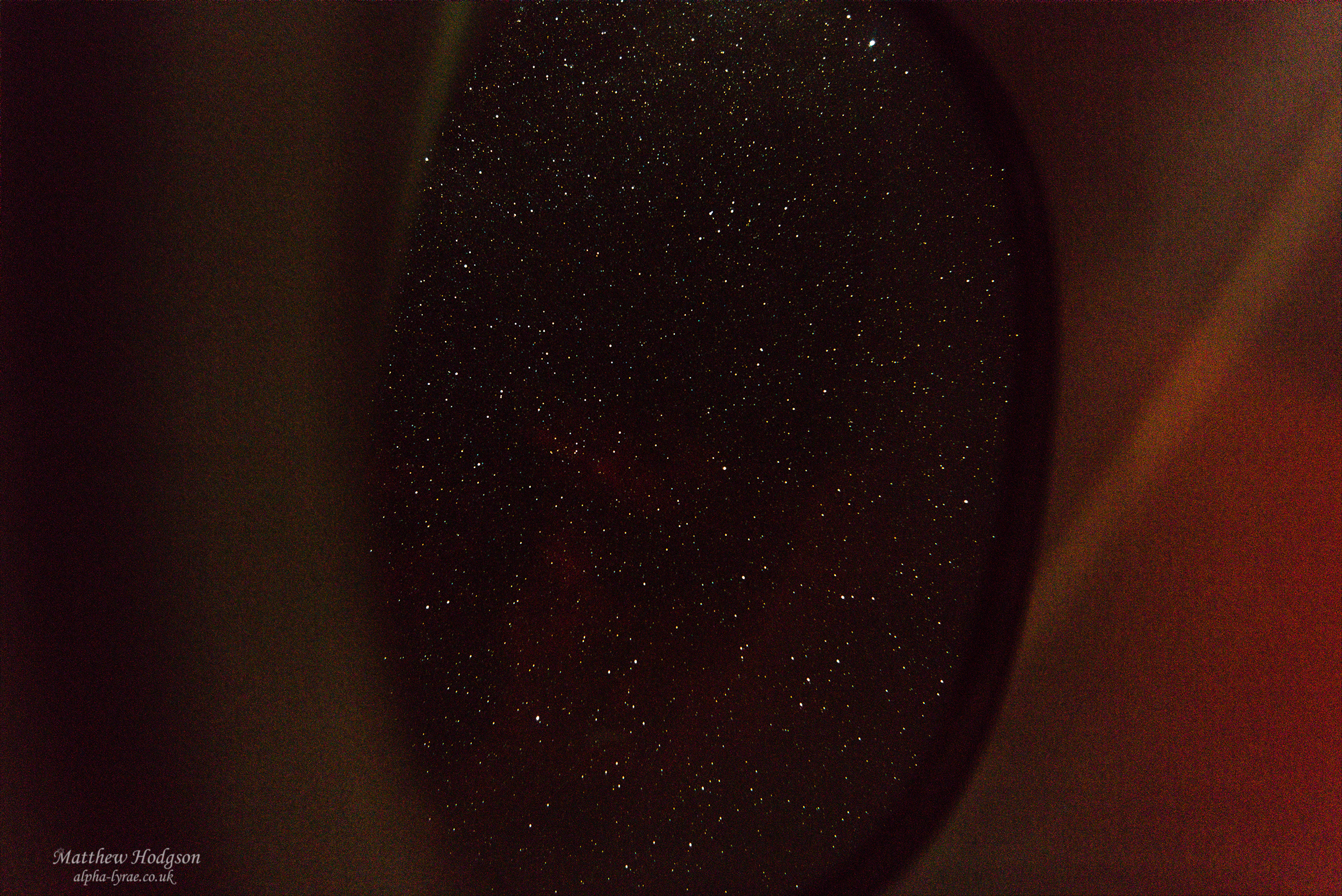 The view from the upper deck of the A380 over Chad in North Africa. Delphinus in particular is very obvious (click for larger image)

While the A380 is one of the smoothest planes I have flown on, there was a small amount of turbulence on this flight which limited exposures to 3 seconds.

I set an intervalometer to the required timings, and then used the airline supplied blanket to shield the window from the cabin lights which were reflecting back towards the camera.  After a number of exposures (and clicks of the mirror which was starting to annoy my wife in the adjacent seat), I had a several photos, and decided to pack down and just enjoy the view myself. 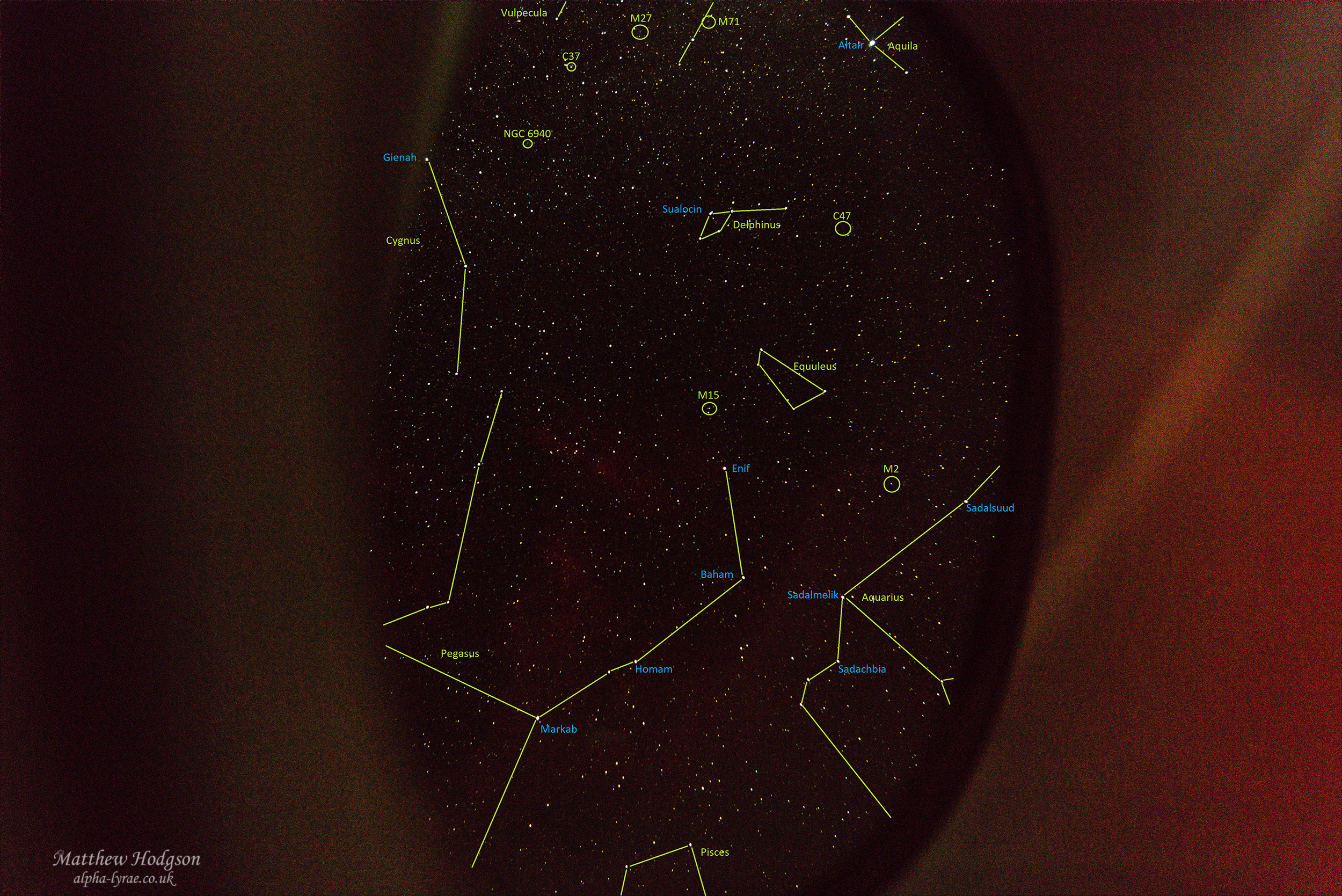 Identification of the constellations which are visible as well several named stars, and while faint, several DSOs as well (click for larger image).

The best 10 images were stacked in Deepsky Stacker and processed in Adobe Lightroom.  Given there is only c.30 seconds of elapsed time, it was not necessary to mask the cabin wall and composite the image as the star movement at this focal length was minimal, and as such, the stacking software did not blur the window frame.

Most of the constellations were rather obvious (Delphinus in particular), but I used Astrometry.net to identify as many of the stars as possible, and then using planetarium software, identified as many DSOs as I could find.  M27 and M2 in particular were obvious, but seems I was able to capture a number down to around magnitude +9 in the field, though sadly the Veil Nebula remained hidden, though aircraft passenger windows are not known for their optical quality or light transmission characteristics.   I drew in the constellation lines, named some of the bright stars and circled the DSOs. 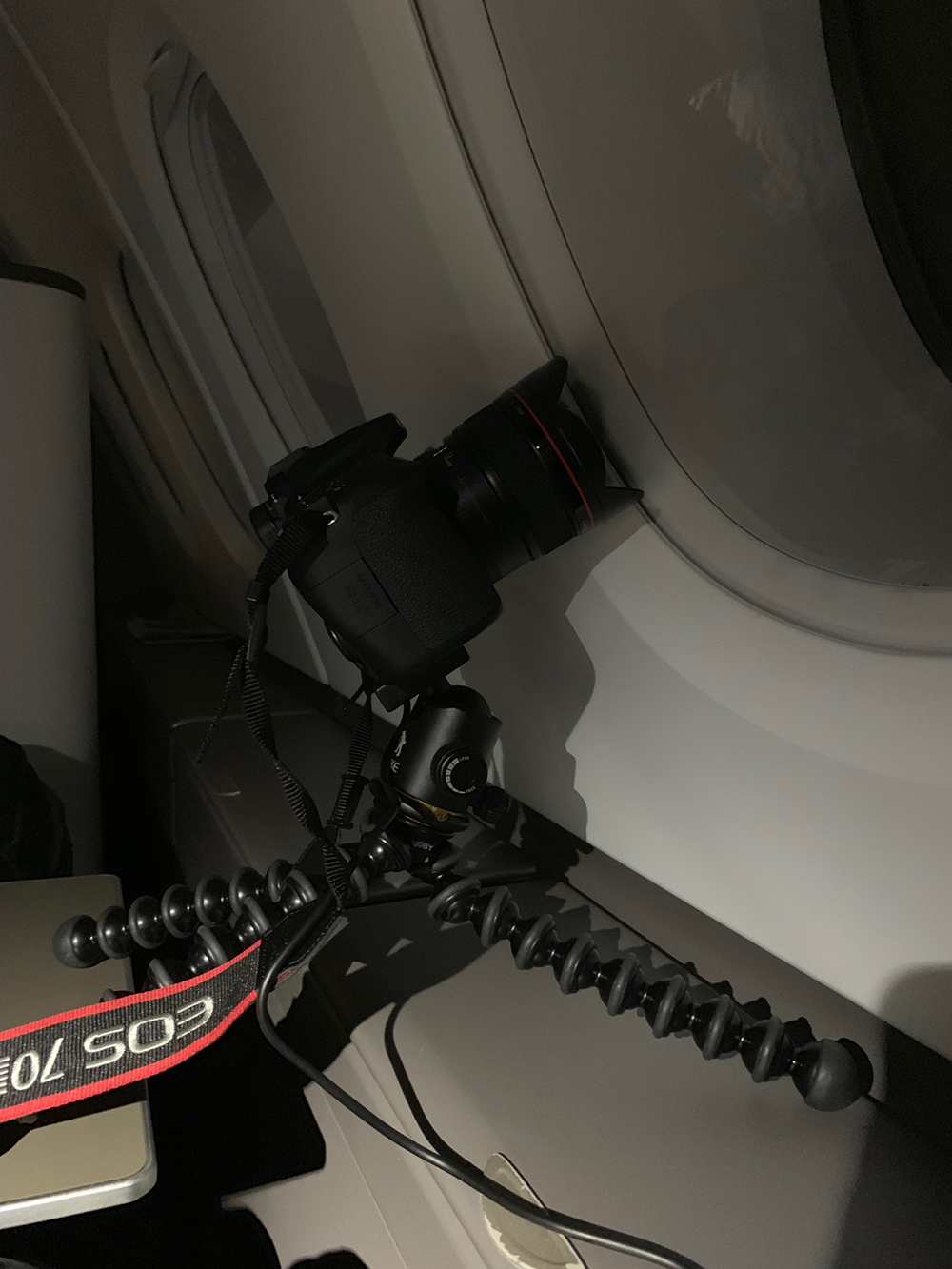 My Canon 70D delicately balanced across the tray table and window ledge.

It was just a shame I was not seated on the other side of the aircraft.  An hour or so later, the central region of the Milky Way would have been coming into view and that would have been quite special.  Maybe next time…