The relentless expansion of urban living combined with very poor lighting choices means in the 21st century, for all but the lucky few, to observe and photograph under dark skies requires some form of travel, whether that is to a regional dark site or perhaps occasionally as I do, to some of the darkest skies in the world in places like Mozambique and Namibia.  Whenever one travels for astronomy, consideration needs to be given to the mode of transport and when heading abroad, luggage allowances.  These trips abroad, unless you take special measures such as shipping a scope and equipment ahead of time, usually restricts the travelling astronomer / astrophotgrapher to more modest scopes and equipment.  The trips I have taken to Namibia and Mozambique over the last 5 years have always involved a flight in small aircraft like a Cessna 210 or a helicopter.  This really limits luggage weight and size. 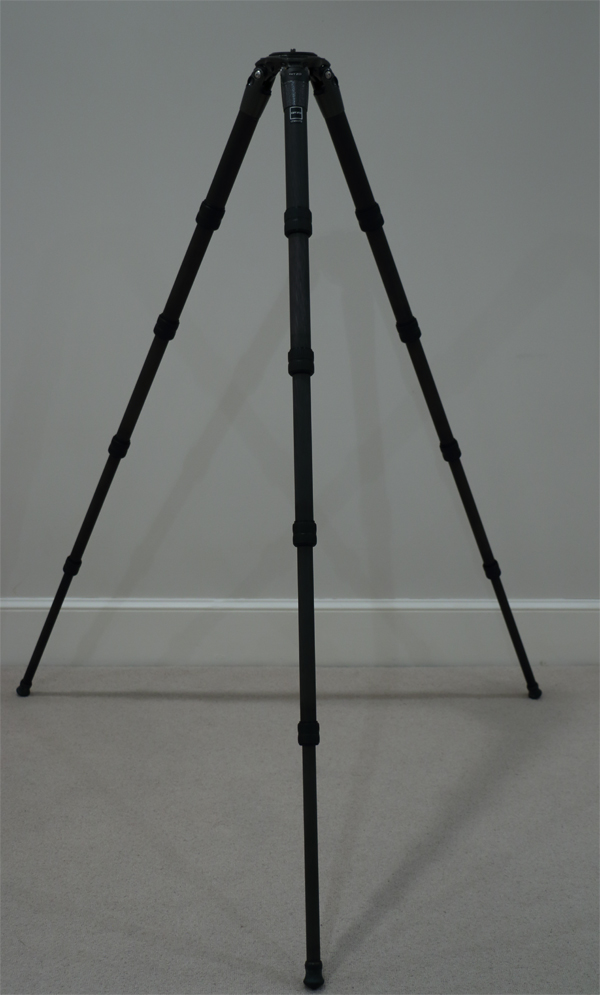 Fully extended, the 5 leg sections of the GT4552TS reaches to 134cm in height.

I am very fortunate to own three airline portable refractors of varying sizes, the APM TMB 105, Takahashi FC-76 and the Takahashi FS-60 which means regardless of destination and baggage allowance, I have a scope which fits the bill.  However, the telescope is only half of the story.  For any successful observing session, a strong, stable base is essential.  Just ask any astronomer what the experience of using a cheap tripod and wobbly mount is like.  A lesson in frustration.  Here in lies the problem.  Most astronomical tripods are heavy and long which is problematic when attempting to comply with what can sometimes be (in the case of a helicopter) a very limited baggage allowance.

When I travel, the scope and optical components such as eyepieces ride in the cabin with me, while I pack a tripod and mount in my main suitcase / hold bag.  When I visited Oman in 2012, I solved the tripod problem with the excellent Gitzo GT5532S carbon fibre tripod (read the review here).  I was so impressed with its torsional rigidity (widely considering the most rigid Gitzo due to only having 3 leg sections) and dampening characteristics that I now tend to favour using that tripod even at home with my 4” class refractors.  At only 2.8kg (with a load capacity of 40kg) and closed length of 62cm it easily slotted into my suitcase, wrapped in clothes and did not cause a problem with the airline imposed maximum weight limit. 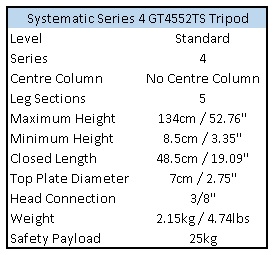 Key statistics of the GT4552TS

However, when I decided I want to take a small scope to Namibia to compliment the larger scope that was available at my destination, I faced a bit of a problem.  The Cessna 210 has a small hold in the tail of the aircraft and as such the maximum size is a fairly limited c.60 litre capacity soft bag.  This meant the GT 5532S was too long.  My attention was drawn to the Gitzo Systematic Series 4 GT4552TS, which is the most compact of all the Systematic tripods when folded at 48.5cm (19.1”), yet extends, thanks to 5 leg sections, to 134cm (52.8”) maximum height and is rated for loads of up to 25kg and camera lenses of up to 600mm focal length. 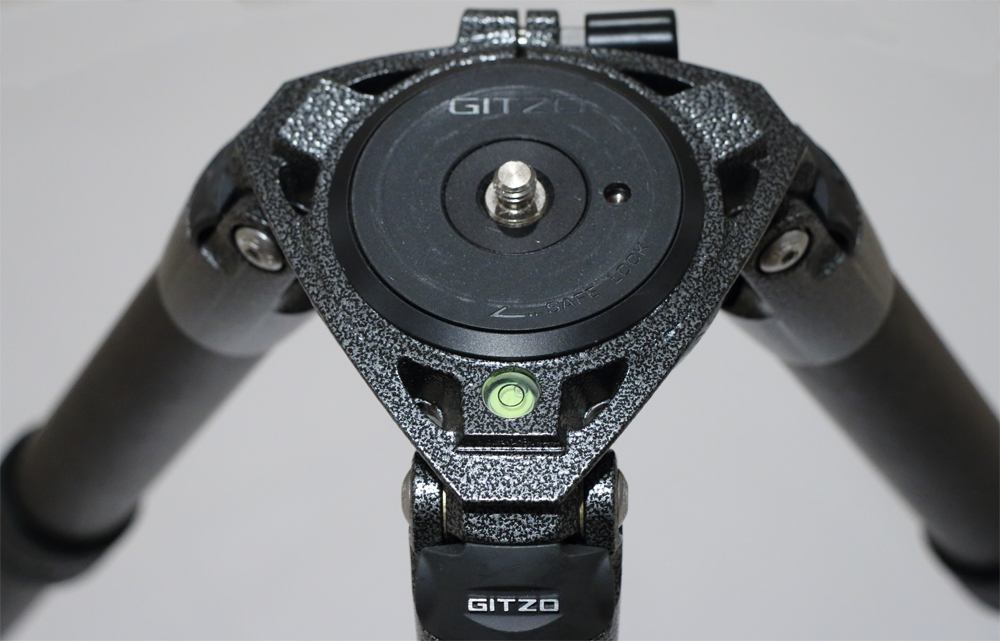 View of the removal top plate with 3/8″ screw as well as built in bubble level, finished in the classic Gitzo “Noir Décor” coating.

The Series 4 GT4552TS unmistakably comes from the same flagship Systematic tripod family as its Series 5 cousin that I have owned for several years.  The materials are clearly of the highest quality and the fabrication is obviously first class.  With its 6X carbon fibre legs and magnesium castings with “noir décor” finish, the tripod has that classic Gitzo look which I believe is very attractive.  Here though, the good looks are more than skin deep.  The coatings on the magnesium castings actually provide a stronger, longer lasting finish. 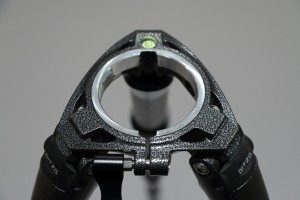 Removing the top plate takes just a few seconds with the inbuilt ratchet.

The most recent iteration of these Gitzo tripods utilise a triangular shaped magnesium top which allows for more efficient distribution of loads, increasing maximum weight capacity.  Also included is a bubble spirit level as well as a built-in lock ratchet lever which allows for a no-tool removal of the standard flat top-plate with 3/8” screw head, should you wish to add a sliding or geared centre column.  While not an aspect that many astronomers will utilise, a photographer who is moving around looking for that perfect shot will be glad of the additional safety mechanism of a button on the underside which must be pressed to release the head once the lever has loosened the grip on the top plate consigning those nightmare scenarios of a camera crashing to the ground thanks to absent mindedness, to the past.

Of all the clever features included in the Systematic tripod series, my favourite is the G-Lock leg locking system.  In contrast to the majority of tripods that use latches, Gitzo employ a twist-lock mechanism which is very quick and simple to use.  Merely rotate each twist lock to loosen, extend the legs out, and then re-tighten each lock.  The tripod employs an anti-leg-rotation system which allows all the leg sections to be pulled out and tightened in one go meaning the tripod can be set up in as little as 20 seconds.  A few seconds saved might not sound like much, but the real benefit comes from the ease of pack-down at the end of long observing session in freezing temperatures when I am thankful I do not need to fiddle with awkward latches.  Carbon fibre legs also stay warmer to the touch than aluminium which I have been grateful of on more than one occasion during the winter. 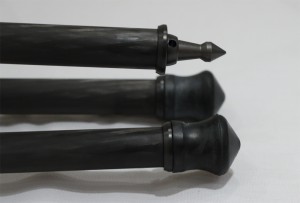 The built in spikes are hidden behind rubber feet.

All Systematic tripods benefit from built-in one piece spiked feet which are covered with protective rubber caps which are more than suitable for everyday use.  I have not found myself on a surface where spikes would be an advantage but should you wish to it is relatively straight forward exercise to twist and pull to reveal the spikes.

The telescopes I have primarily used with the GT4552TS are the Takahashi FC-76 and FS-60 which can be pushed to 200x magnification when sky conditions allow.  The stability of the tripod and mount at those powers is of paramount importance as any vibrations will feel like you are observing during an earthquake.

Gitzo uses “Carbon 6X” tubes in the construction of its tripods.  Each tube is made of six crossed layers of 7μm thick carbon fibres.  The top leg of the series 4 tripods have a diameter of 36.6mm (1 1/2”) and the fifth and bottom section of the GT4552TS a diameter of 20mm (3/4”).  Despite this far smaller lower leg diameter and additional sections compared to my three-leg GT5532S, the torsional rigidity is still exceptionally good with minimal performance reduction from its larger cousin.  Similarly, the dampening characteristics are also very good.  Vibrations induced by focusing the telescope subside in under a second and even a deliberate hit of the tripod damps out in a couple of seconds. 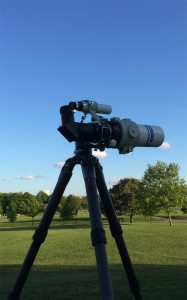 The Takahashi FS-60 sits atop the GT4553TS ready for a nights observing.

I have put the GT4552TS under more testing conditions with the use of my APM TMB 105 and Tele Optic Ercole mount.  The combined weight of these components exceeds 11kg, with the 7kg telescope set well away from the centre-axis of the tripod unlike the traditional camera and lens combination and I have still been impressed with the performance.  While the tripod does give up some performance to the GT5532S, under general observing conditions my attention has not been drawn to the tripod for the wrong reasons and that is what I look for in my equipment, performance and no fuss.

Over the last couple of years, I have found myself exploring night sky and time lapse photography where exposures can be as long as 15 to 30 seconds.  The stability of the GT4552TS has never let me down.  In pursuit of interesting shots with foreground subjects, I have also made use of the leg angle selectors which are useful if setting up on uneven terrain or if you wish to shoot from low to the ground.  The minimum height is only 8.5cm (3.3”).

The only criticism I have of the GT4552TS is the same I would level at the GT5532S which is it can be buffeted more by the wind than other tripods that have similar load capacities but are far heavier.  However, there is a hook on the underside of the mounting plate which allows for the hanging of a stabilising weight.  I have hung my camera bag during breezy conditions and found it greatly improves the performance of the tripod under these conditions. 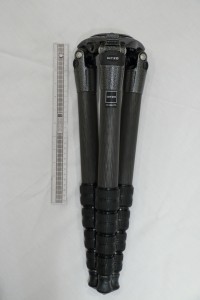 Conclusion
Weighing in at only 2.15kg and with a closed length of 48.5cm, the GT4552TS is arguably the ultimate travel tripod for an astronomer visiting dark skies providing a much needed stable base with excellent torsional rigidity.  Photographers who are constantly on the move might feel that at over 2kg, the GT4552TS hardly qualifies as portable but unlike some lighter tripods, the Gitzo will never cost you a prize photo due to less than perfect performance.

While it is undeniable that the price of this tripod is high with an RRP of £895.95, I believe the performance more than reimburses the user for the cost.  As is always the case, shop around as I paid £100 less than the list price.  At the time of writing this review (March 2016), Gitzo are running a sales event on many of their tripods with the current price of the GT4552TS at £769.95.