I really like Alt-Az mounts.  There is no need to align with the celestial pole, just place the mount and you are ready to observe.  The simplicity of the movements of up / down and left / right make the job of star hopping a little easier, and regardless of telescope design, the eyepiece position moves in a simple arc and never ends up in an awkward orientation that necessitates the rotation of the scope in its tube rings.

All the mounts I currently own are Alt-Az and when I added my largest, heaviest scope to my observing arsenal, the APM LZOS 180/1260 triplet Apochromatic refractor, I wanted to mount it on another Alt-Az. However, while the equatorial mount universe offers a number of seriously heavy duty GEMs (assuming your wallet has the capacity) for large OTAs, the Alt-Az market seems to cap out around 15-18kg load capacity with such mounts like the excellent Tele Optic Giro Ercole (read the review here).

When it comes to mounts, maximum load capacity does not even tell the full story. Moment of inertia is of critical importance. A short heavy scope is easier to mount than a long heavy one. The 180mm triplet weighs 23kg as a barebones OTA and even with a 50mm finder, diagonal and large EP on the back, the balance point is only a few centimetres behind the lens cell on a 1.1-metre-long tube (excluding the extending dew shield). It is quite simply a very front heavy, fairly long scope requiring a different class of mount than the Ercole. 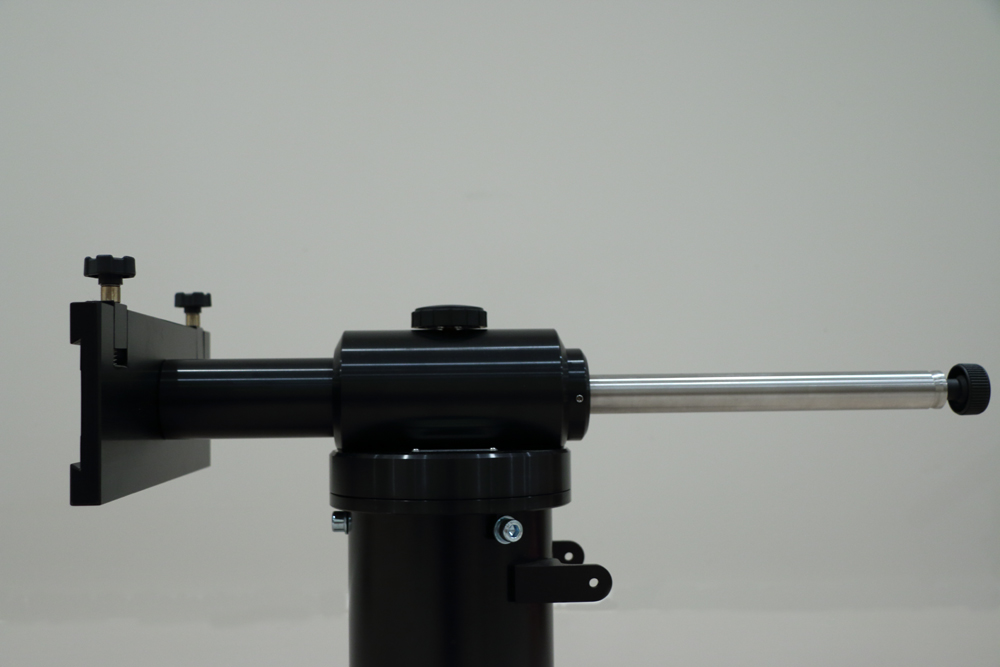 The APM AzMaxLoad sitting atop a Losmandy G11 tripod with Losmandy mounting plate.

Fortunately, APM themselves offer a solution in the form of the AzMaxLoad and after discussing options with them while I was waiting for the 180, I ordered the mount and a Losmandy G11 tripod to support it.  The AzMaxLoad mount was designed by APM as a replacement for the discontinued Tele Optic Giro XXL after several customers requested an alternative.

First impressions are impressive and imposing in equal measure.  This mount certainly appears to be another example of German engineering and fabrication excellence.  The machining is clearly first class as is the deep black finish to the mount.  A little laser engraved serial plate on the mount is a nice extra touch. 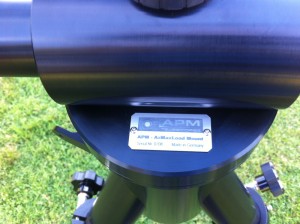 The laser engraved serial plate is a nice touch (click for larger image).

Though APM came up with a brand new design, it clearly comes from the same family as the Giro mounts with intersecting axes.  Manufactured from aluminium and stainless steel, the AzMaxLoad benefits from a substantial 180mm (7.1”) bearing that rides on Teflon on the azimuth axis which allows distribution of large loads.  The altitude axis uses a 50mm axial-needle bearing which is designed to support high loads parallel to the shaft.  The side telescope arm is 60mm in diameter and 200mn (7.8”) in length from the centre of the mount, having two metric M6 threads with 35mm centre-to-centre separation for telescope plate/clamp attachment.  I utilise a Losmandy dovetail plate to attach my scope to the mount.  The mount also has two well sized rubberised variable tension knobs, one on each axis which are easy to operate even when wearing gloves, though unlike the Ercole it does not have a lock on the altitude axis to control balance issues when switching eyepieces. 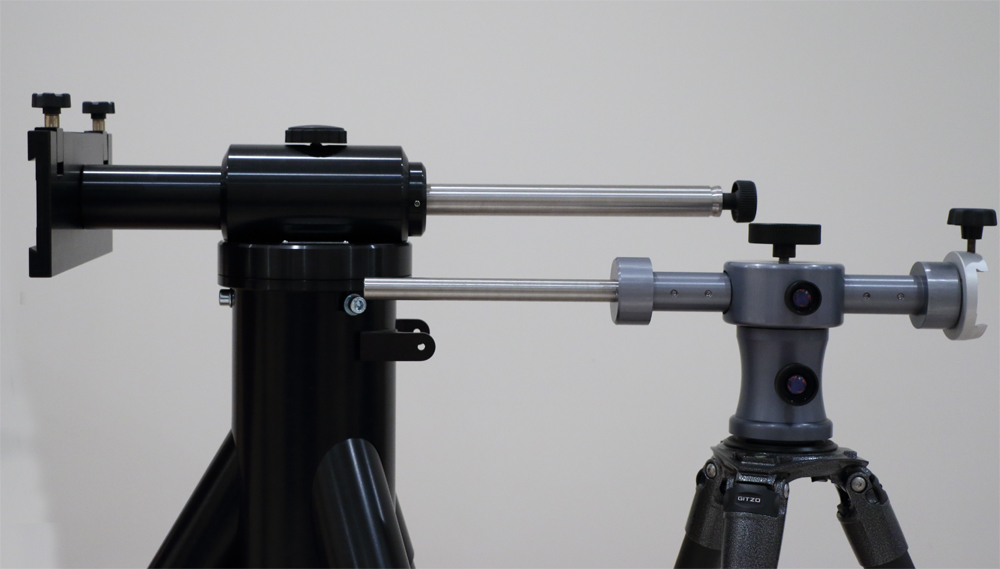 The AxMaxLoad on the left is clearly in a different size class from the already substantial Tele Optic Ercole on the right.

Weighing in at approximately 10kg (22lbs) including the counterweight bar, the AzMaxLoad is certainly imposing at an order of magnitude larger than heavy duty Alt Az mounts like my particular favourite, the Ercole, but then the carrying capacity is also on another level from the already substantial 18kg OTA capacity of the Ercole.

As much as we all like a single number to categorise performance such as strehl ratio in telescope optics or top speed in a car, the reality is these single values never tell the whole story and the same applies to telescope mounts and carrying capacity.  APM themselves offer some level of guidance about the loading characteristics.  To paraphrase, while it is difficult to define maximum load capacity as it depends on the tripod and the size of the scope, a solid tripod should permit the mounting of the Celestron C14, a 7” triplet Apo or an 8” achromat, while using a strong pier, 50kg (120lbs) should be no problem. 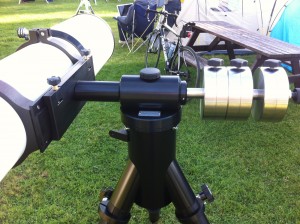 The APM 180 and AzMaxLoad ready for first light at AstroCamp in the Brecon Beacons (click for larger image).

The first substantial use of the AzMaxLoad unsurprisingly coincided with first light with my APM LZOS 180 Apo.  As one might expect, when faced with using such an exciting telescope for the first time, my attention was very much focused on the incredible views the scope was throwing up and I paid little regard to the mount itself.  However, that in itself is a compliment as it performed exactly as I was hopping and did not draw attention to itself for the wrong reasons.

The motion of the mount is incredibly smooth with no backlash at all, and once well balanced (which is a crucial step), the AzMaxLoad will hold the scope perfectly steady regardless of the orientation.  Assuming one has spent a few minutes making sure the balance is spot on, there really is no need to use the variable tension at all.  A very pleasing aspect of the performance is there is no stickiness when first moving the mount such that the often required extra force to get a mount moving is not needed here with the same force applied consistently from the beginning to the end of a telescope manoeuvre.  This makes tracking at high magnifications relatively easy with none of those frustrating jumps can manifest in mounts that require a bit more effort to get going.

With such smooth motion, even tracking near the zenith is a simple affair, something that many Alt-Az mounts can struggle with, despite no slow motion controls.  As you might imagine, when sky conditions allow, I will take the magnification above 200x, yet keeping the object of interest in the field is no problem at all.  I have not noted any variations in the performance in relation to ambient temperature having used the mount in mild (for the UK) night time temps in the mid-teens Celsius to below zero in the depths of winter.

As I mentioned in my Ercole review, I like to manually track the ISS across the sky and I now use this as a test of the smoothness of a mount when panning at high speed.  Keeping the space station centred in the EP at 70-100x is an easy affair.  The only impediment to using a higher magnification is the difficulty in first locating the station with a narrower field of view.

If I have one criticism of the AzMaxLoad, at least in regards to using my 1.1m long refractor, is that without an altitude lock and such sensitivity to balance, when switching eyepieces, especially from a very heavy 2” model like the 21mm Ethos to a small high power 1.25” EP such as the 3-6mm Nagler Zoom, the OTA will move even with the variable tension knobs engaged.  I now use a small magnetic counterweight set at the eyepiece end of the scope to control changes in the balance which removes the need to slide the scope in its tube-rings.  This problem might be less of an issue for a shorter, stubby OTA like a C14 which will have a smaller turning moment.

For anyone considering the AzMaxLoad for a long front heavy refractor like mine, I would highlight that while the G11 tripod provides a very stable base, the EP height when pointing near the zenith is rather close to the ground.  I now use the Losmandy 12” extension tube to get a bit more elevation without sacrificing stability.  I also use an 80mm finder which has shifted the balance point slightly, further lifting the EP height at the zenith. 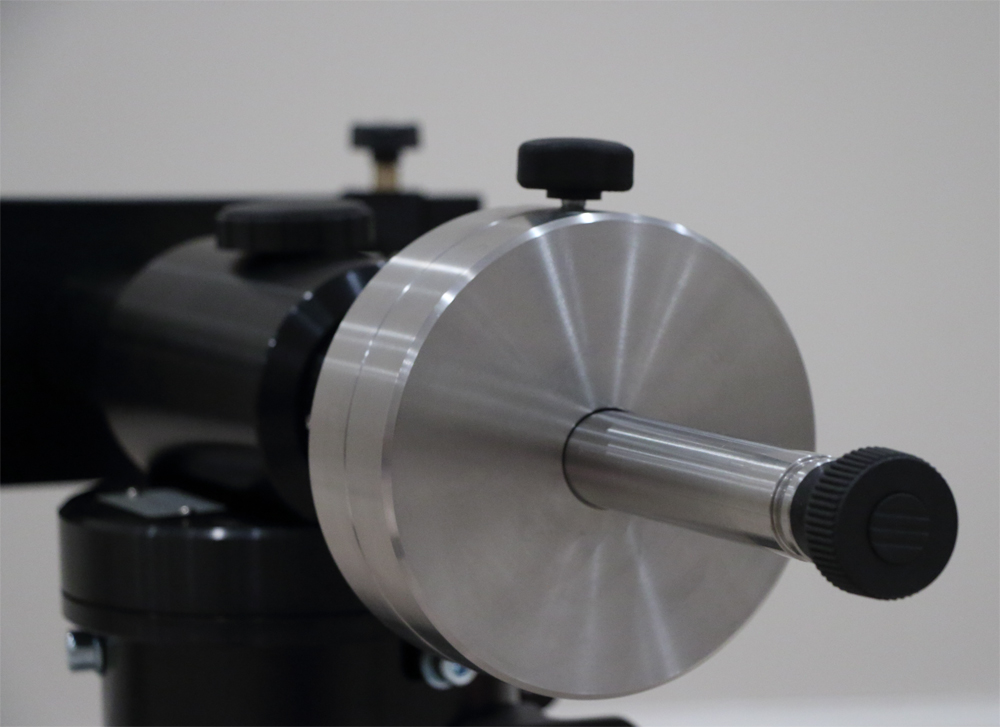 The 8kg counterweights are made from stainless steel and wonderfully finished, but at €250 each, are not cheap.

The AzMaxLoad is made to order, typically taking 4 weeks for delivery, so each purchaser is able to specify the mounting connection for a particular tripod or pier.  However, because these mounts are a special order item and a low volume one, APM have no intention of developing any kind of encoder system for computer assisted pointing, but as I grew up in an era of star-hopping, that is not an issue for me.

If you are in the market for a seriously heavy duty Alt-Az mount, you are not exactly spoiled for choice, but fortunately the APM AzMaxLoad is an excellent performer such that the lack of options is not an impediment to enjoying observing with the simplicity of Alt-Az.  The only negative to highlight is the sensitivity to balance means I cannot be lazy with the initial setup as I often am with my smaller OTAs, where I rely on the variable tension adjustment to compensate.  This sensitivity extends to switching between large and small EPs such that I now use a small magnetic counterweight set to manage the weight changes.

At a cost of €995 including the counterweight arm, the AzMaxLoad is not cheap, but at this level of performance and load capacity I would suggest it is actually rather well priced.  Just be aware that the 8kg counterweights, as beautifully machined as they are from stainless steel, are €250 each (I need three for my APM 180!) and the G11 tripod currently retails for €800, meaning that the total cost for my setup was approximately €2,500.