I am a deep space junkie.  When it comes to astronomy, it is deep sky all the way for me.  Be they globular clusters, nebulae, open clusters, or galaxies, those faint fuzzies are my primary interest.  Planetary watching, lunar study, and double star observing all run a very distant second.  However, the reality of modern city living (especially in my central London location) is that light pollution can make enjoying those deep sky objects very challenging indeed and tends to restrict observation to the brighter showpiece examples.  As such my passion for DSOs tends to follow me to dark sky locations such as Astrocamp in the Brecon Beacons or far away locations such as Namibia and Oman (you can read about my recent Namibian adventures here).

About a year ago, I decided to give double star observing a try, and over the course of the last 12 months, I have taken the time to observe a great number of them.  The initial attraction was light pollution, be it from our nearest celestial neighbour, the Moon, or the manmade variety, has little impact on the observation of double stars, making the pursuit ideally suited to city living.

Many dedicated double star observers enjoy the challenge of splitting doubles with very little separation, often seen as a badge of honour for the quality of the optics in their telescope, but this holds little interest for me.  I have found the aspect of double star observing that captivated me to be colour contrast.  Those double stars where each component has very different hue often present a striking and memorable view in the eyepiece.  The most famous example is Alberio (β Cygni) located in the Summer Triangle constellation Cygnus, which shows a brighter amber/yellow star and dimmer partner, but with more intense blue-green colour.  There are many more examples I have come across over the last year, a few of which I would say rival or perhaps even beat Alberio in the contrast stakes (Almach – γ Andromedae is my particular favourite) and I present my top choices below.

I have ordered the list by Right Ascension, providing the coordinates for the brightest component in each double.  In most examples the separations are so fine that such a distinction is unnecessary though one or two on the list have angular separation measured in minutes of arc rather than seconds.  I have also provided the position angle of the secondary relative to the primary.  Make sure to account for the field orientation of your scope, for example a Newtonian would invert the field so North would be at the bottom of the accompanying diagram. 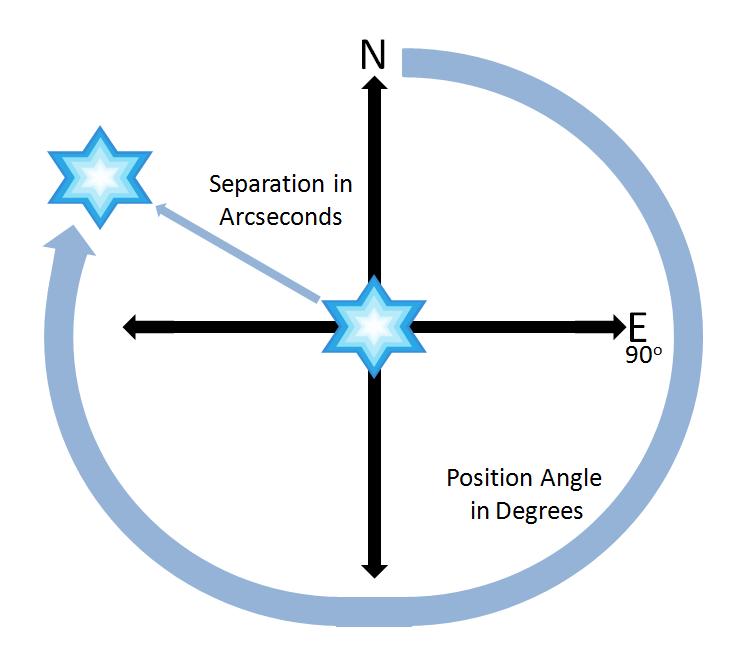 The two primary measurements of double stars are separation and position angle. Make sure to account for the orientation of field in your telescope

Rather than provide my own commentary on the perceived colour (and risk “colouring” your own view by creating expectations), I have given the stellar classification of each component which is based on spectral characteristics of each star and the numerical separation on the Morgan-Keenan class system of O, B, A, F, G, K and M.  O stars are the hottest and M the coolest and each category are further divided from 0 (hottest) to 9 (coldest).  Roman numerals are added for luminosity class.  For example the Sun is a G2V star.  Alpha Lyrae (Vega) is classified as A0V.  Using my methodology, the colour difference would be given as 2 (A to G is two steps).

As far as appropriate magnification goes, I have read all sorts of rules and thoughts on the topic, but I have found the most pleasing views are achieved by using just enough magnification to separate the components.  For widely spaced stars, magnification of 30-60x seems to work well, and for tight doubles, magnifications of 100-200x can be needed.  My recommendation is to experiment and discover what works best for you.

One tip for enhancing colour perception is to slightly defocus the view through a low-power eyepiece.  As you defocus the star and they become small blobs, the colours become more apparent.

The table is by no means and exhaustive list of colour contrasting double stars, so if you have any more examples please leave a comment and I will add them to the list. 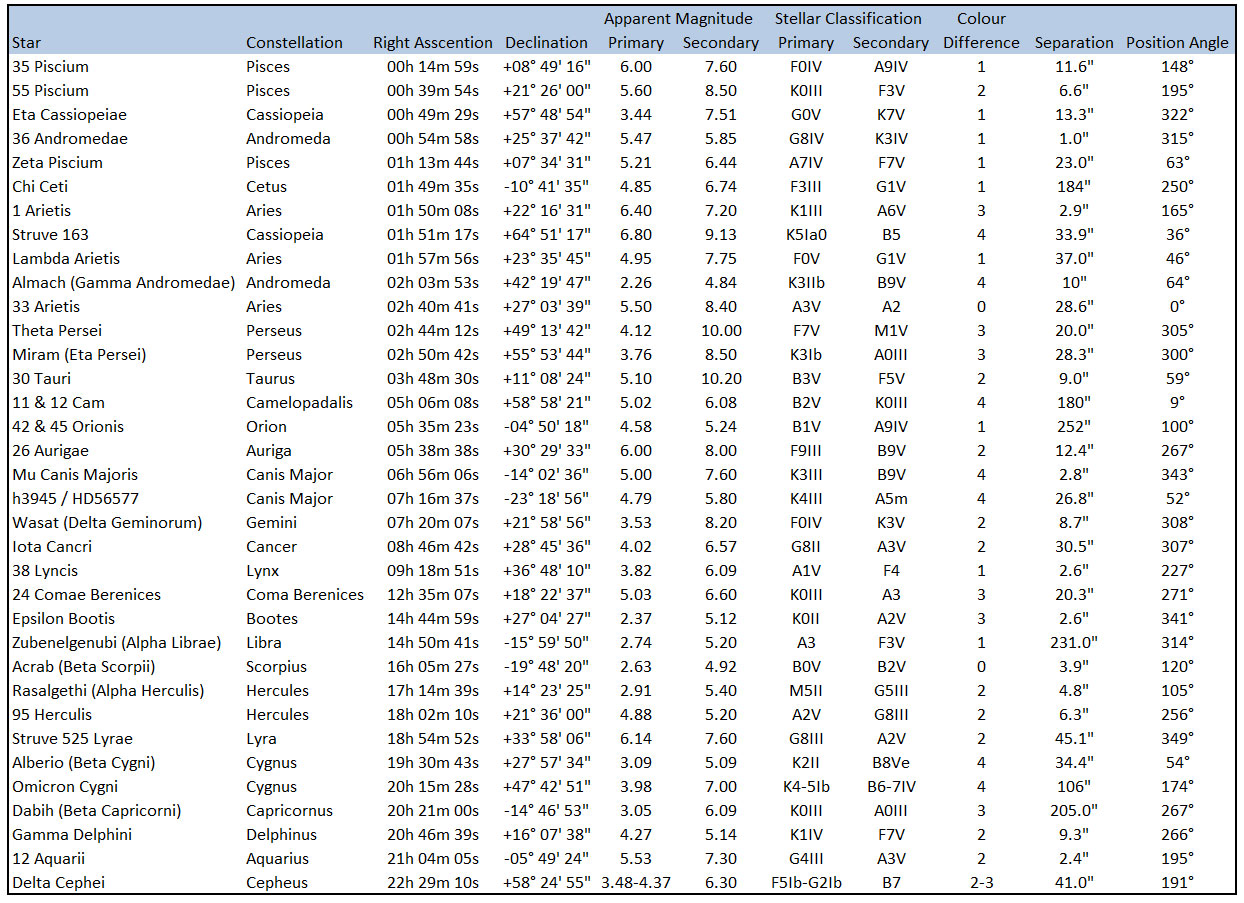 You may have noticed that one or two of my choices actually have the same spectral class which begs the question what colour contrast could there be?  While some colour differences seen are real and related to temperature, others are merely an illusion, a contrast effect between stars of differing brightness.  So the question is, what colours do you see?