On August 27, 2013, a team of astronomers announced the discovery of Asteroid P/2013 P5 using the Pan-STARRS survey telescope in Hawaii, when it appeared as an unusually fuzzy object.  The multiple tails, which give the appearance of “spokes on a wheel” were discovered when the Hubble Space Telescope turned its gaze towards the object on September 10th using the WFC3 instrument.   At the time of the HST observations, P/2013 P5 was 112 million miles from the Earth (1.1 a.u) and 195 million miles from the Sun.

Lead investigator David Jewitt said “We were literally dumbfounded when we saw it.”  “Even more amazing, its tail structures change dramatically in just 13 days as it belches out dust. That also caught us by surprise. It’s hard to believe we’re looking at an asteroid.”

HST imaged the asteroid once again on September 23rd, and the appearance had altered dramatically, looking as though the entire structure had swung around.

Jessica Agarwal of the Max Planck Institute for Solar System Research in Lindau, Germany, has modelled the asteroid and showed that the tails could have been formed by a series of impulsive dust-ejection events. Her calculations show dust-ejection events occurred April 15, July 18, July 24, Aug. 8, Aug. 26 and Sept. 4.  Subsequent radiation pressure from the sun then stretched the dust into streamers.

The team have published their findings in the November 7th 2013 issue of The Astrophysical Journal Letters where they suggest that radiation pressure may have spun P/2013 P5 up, resulting in the spin rate increasing to a point where the asteroids weak gravity is no longer sufficient to hold it together.  The team believe that if this is happening, dust would slide towards the equator where it shatters and falls off, drifting into space to form a tail.  They do not believe the tails are the result of impact with another asteroid as a large quantity of dust has not been blasted off at once.  Estimates for dust loss currently amount to 100 to 1,000 tons which is a small fraction of the total mass of the asteroid which has a diameter of approximately 430 metres.

The asteroid will continue to be monitored to see whether dust leaves at the equatorial plane which would be strong evidence of the rotational breakup.  If the team’s interpretation of what is being seen is correct, it would provide evidence that rotational breakup may be commonplace in the asteroid belt and may even be the main mechanism for the “way asteroids die.”

The team believe that P/2013 P5 is actually a fragment of a larger asteroid that broke away some 200 million years ago as there are many collision fragments in similar orbits to P/2013 P5. 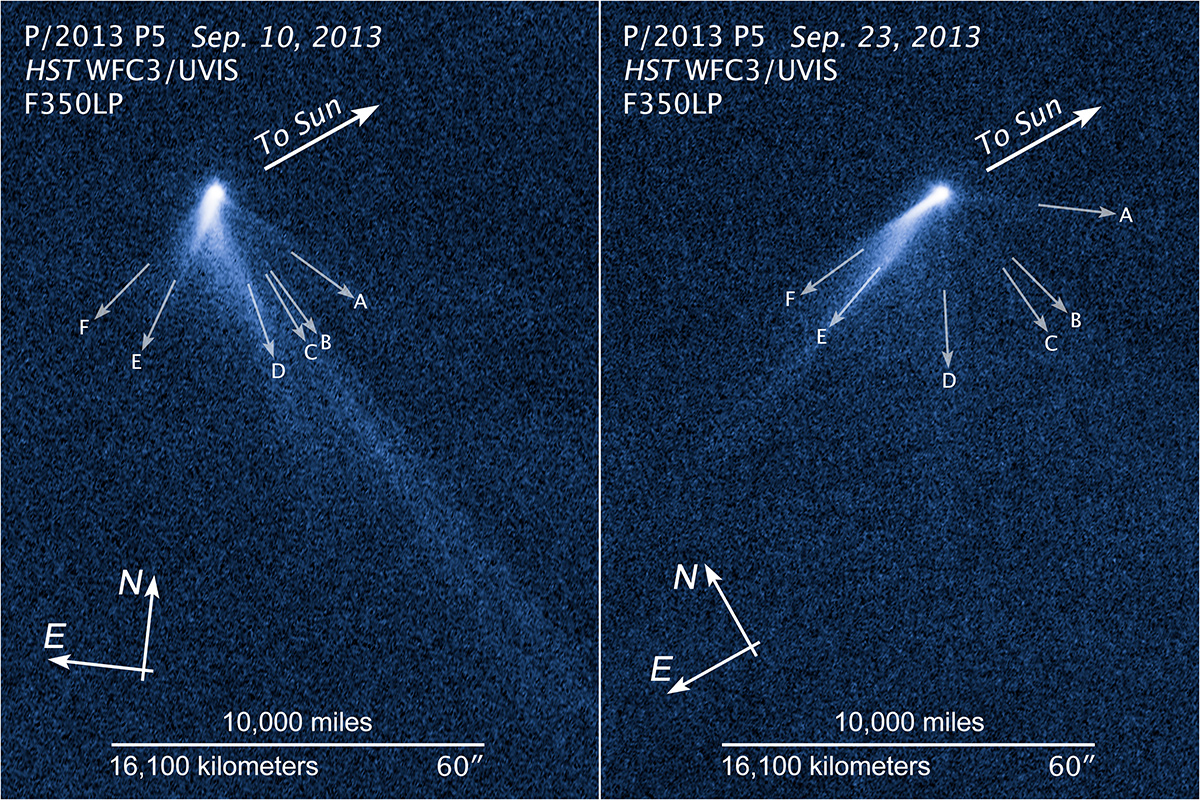