On August 14th 2013, the brightest Nova seen in northern hemisphere skies in 5 years erupted in the constellation of Delphinus.  Discovered by Koichi Itagaki of Yamagata, Japan, the Nova peaked two days after discovery at magnitude +4.4, decaying to magnitude +9.7 by October 7th.  The progenitor star was reportedly magnitude +17 before the eruption brightened approximately 100,000 times by the peak on August 16th.  Now it is time for our southern hemisphere stargazing cousins to enjoy a similar event. 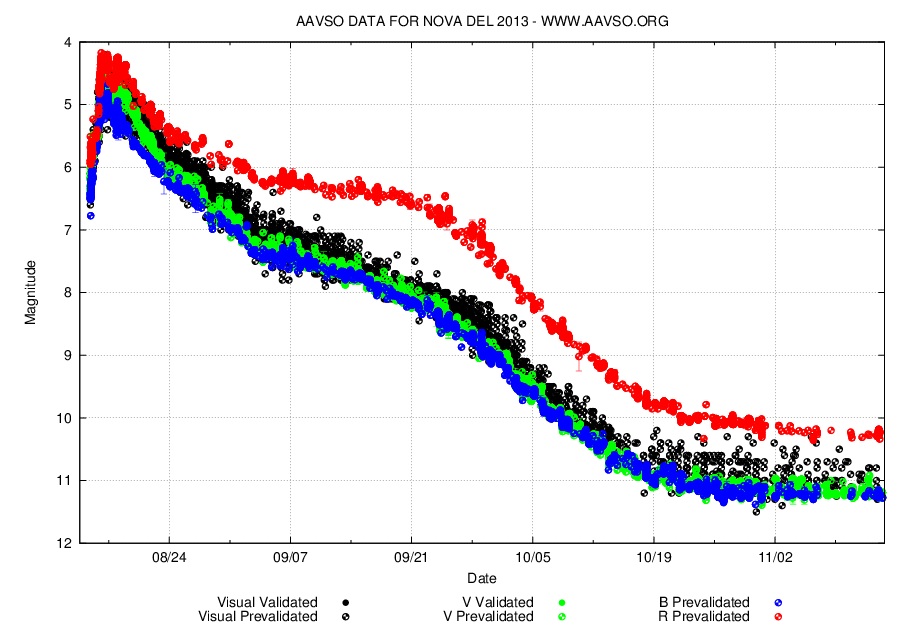 A nova has erupted in Centaurus to a reported magnitude +5 to the west of Alpha and Beta Centauri.  John Seach in Australia discovered on December 2nd with a DSLR patrol camera at magnitude +5.5.  A previous image he recorded on November 26th recorded nothing as bright as mag +11.  On December 3rd, the team of Ernesto Guido, Nick Howes and Martino Nicolini used a remotely controlled 20” scope to record an image of the event.  At the same time, variable star observers were reporting an increase in the brightening to around +4.6-4.7 and the recorded spectra was showing the nova’s strong hydrogen emission lines.

Its preliminary designation is PNV J13544700-5909080 and is located at RA 13h 54m 45s, DEC-59o 09.1’ (J2000.0).  The below star chart provided by the American Association of Varible Star Observers (AAVSO) is centred on the Nova and the bright star is Beta Centauri.  The location is almost perfectly centred on a previously seen magnitude +15 star.

UPDATE 05 December 2013: The AAVSO is now reporting that the nova has continued to brighten with the V magnitude at +3.8 which would make it the brightest nova seen in many years.

A classical nova is cataclysmic nuclear explosion on a white dwarf star.  A nova occurs if a white dwarf has a close companion that overflows its Roche Lobe allowing the dwarf to steadily accrete gas from the companion.  The captured gases are compacted by the intense gravity of the white dwarf which heats the gas to very high temperatures as additional material is drawn in.  The dependence of the hydrogen fusion rate on temperature and pressure means that it is only when it is compressed and heated at the surface of the white dwarf to a temperature of approximately 20,000,000K will a fusion reaction occurs.  Very rarely, such a reaction can occur in a stable manner, but for most, the reaction is thermally unstable and converts, incredibly rapidly, a large amount of the accreted hydrogen into heavy elements in a runaway fusion reaction which releases a tremendous amount of energy, blowing away the remaining accreted gases and producing a bright outburst of light.