I first visited Namibia in 2011 for a two week safari which culminated in a four night stay at the &Beyond Sossusvlei Desert Lodge in the NamibRand Nature Reserve, located around 325km south west of the capital city Windhoek which provided the opportunity to stargaze under some of the darkest skies I have ever seen.  Two years later, a safari in Botswana and Zambia provided a great opportunity for another four night visit (you can read all about that experience and more details about the lodge and location here) to reacquaint myself with those wonderful skies and make full use of the 12” Schmitt-Cassegrain telescope and resident astronomer located at the lodge.  After that second visit I was invited to join the ranks of the resident astronomer team and returned a year later in September 2014 for a two week spell sharing my knowledge of the sky with the guests of the lodge. 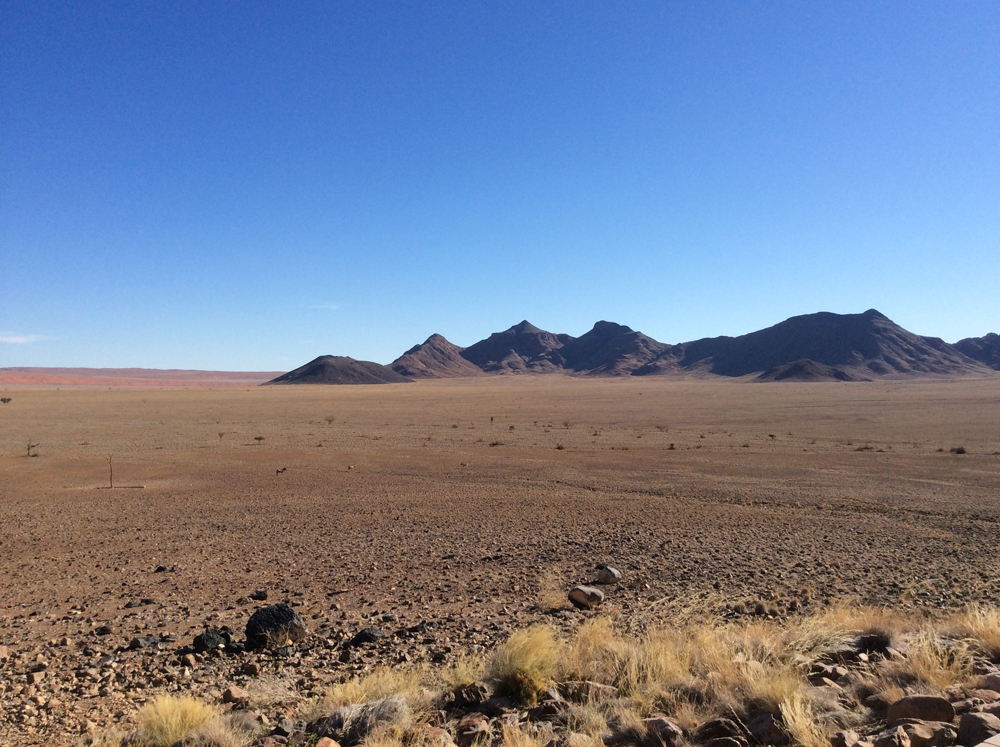 The beautiful rugged scenery of the NamibRand Nature Reserve

Three tiers designate the quality of the night skies the reserve is recognised for.  Gold is the highest award, followed by Silver and Bronze.  Minimum requirements for each classification are shown in the table below.

The requirements for each tier status as set by the IDA. Source: International Dark Sky Association

The IDA state that an International Dark Sky Reserve is “a public or private land possessing an exceptional or distinguished quality of starry nights and nocturnal environment that is specifically protected for its scientific, natural, educational, cultural, heritage and/or public enjoyment mission of a large peripheral area. The International Dark Sky Reserve consists of a core area meeting the minimum criteria for sky quality and natural darkness, and a peripheral area that supports dark sky values in the core and receives benefits from them as well. The International Dark Sky Reserve is formed through a partnership of multiple land owners and/or administrators that have recognized the value of the starry night through regulation and/or formal agreement and/or long term planning.”

To date there are nine certified International Dark Sky Reserves of which the NamibRand is one of only three that are rated Gold. 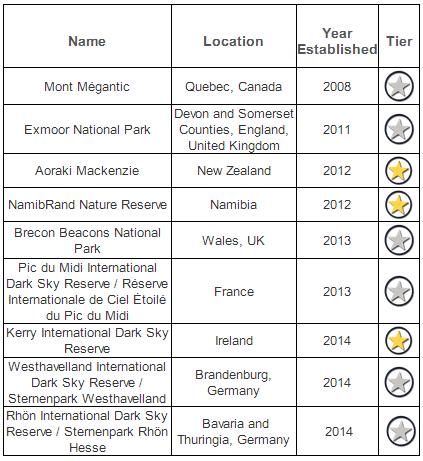 For more information about all the work of the IDA, please click here. 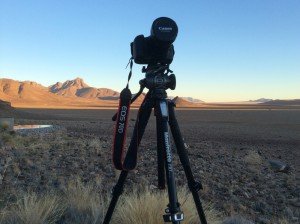 The Canon 70D and 14mm f/2.8 L lens ready to go for a night of astrophotography

Equipment Used
All the night sky images shown on this page were taken with my Canon 70D DSLR and the Canon EF 14mm f/2.8 L II USM lens.  The lens is part of the professional line with a 14mm focal length and maximum aperture setting of f/2.8 which is essential for capturing faint details in the night sky.  The lens boasts a maximum field of view of 114o.  However, my Canon 70D has a crop sensor so the lens actually behaves as a 22mm lens (14mm x 1.6 crop factor).  Due to weight restrictions of internal flights in Namibia I was unable to take my iOptron SkyTracker V2 so all the shots were static and 15 seconds duration.  Unless otherwise stated, the ISO setting was 3,200.

The observatory’s 12″ Meade LX200 has proved to be an excellent instrument to explore the wonderful dark skies of the NamibRand Nature Reserve. 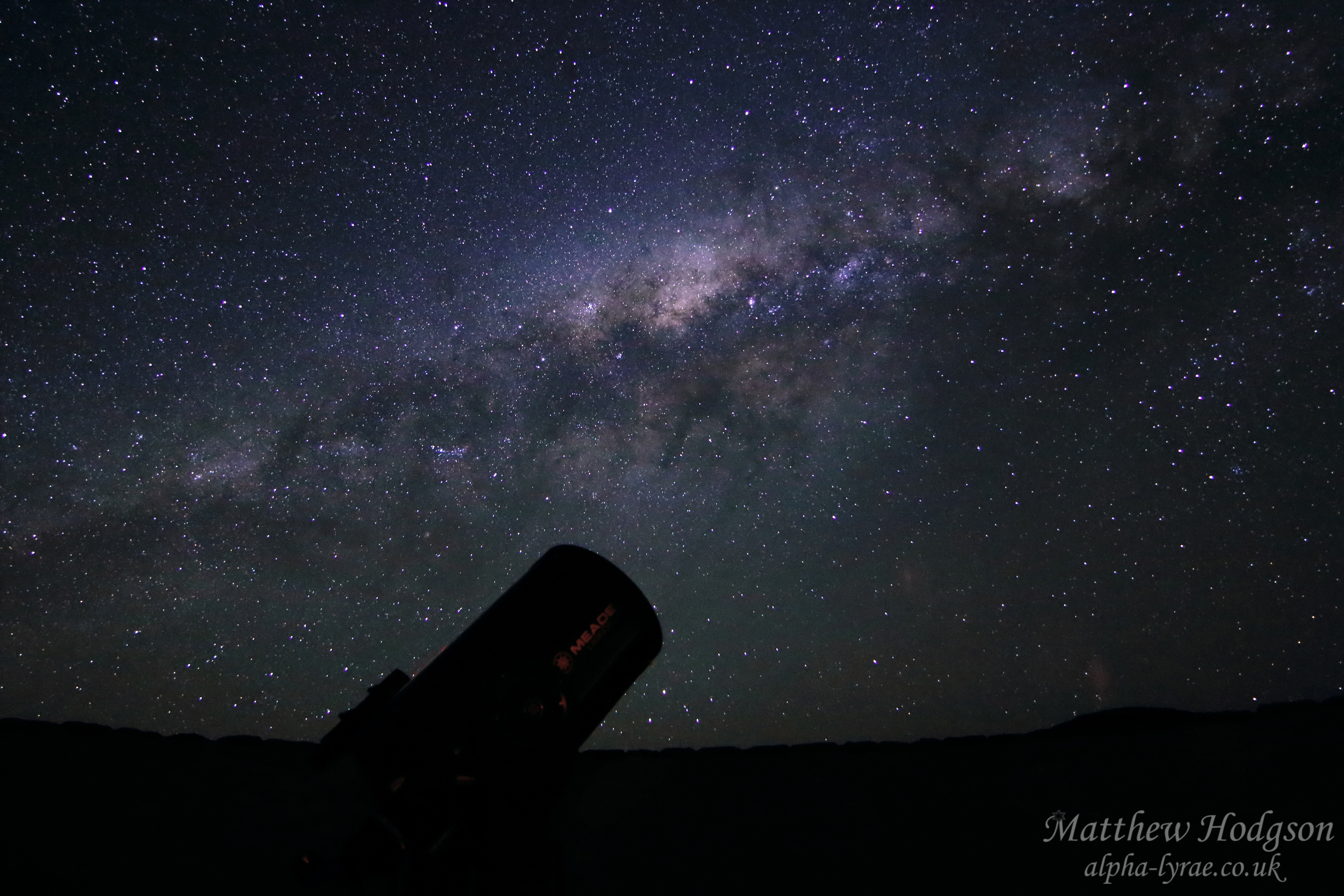 The Meade LX200 in the Sossusvlei Desert Lodge Observatory

The skies in the reserve are so dark that that the zodiacal light can almost be described as annoyingly bright!  This image was captured approximately one hour after sunset from inside the observatory. 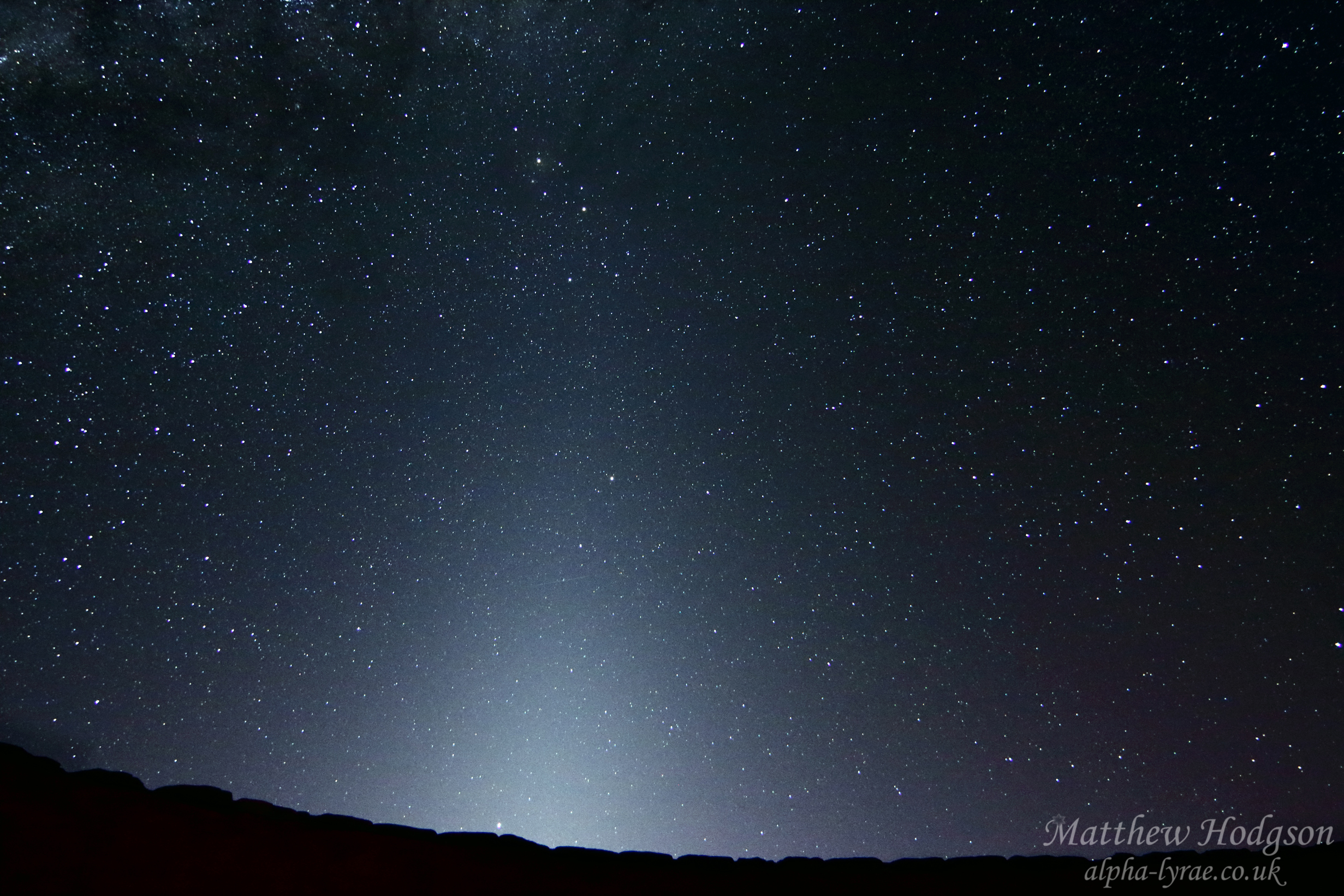 The distinctive triangular shape of the zodiacal light as seen from the observatory 1 hour after sunset.

A photo towards the centre of the Milky Way which also captured one of our galaxy’s small satellite dwarf companions, the Small Magellanic Cloud. 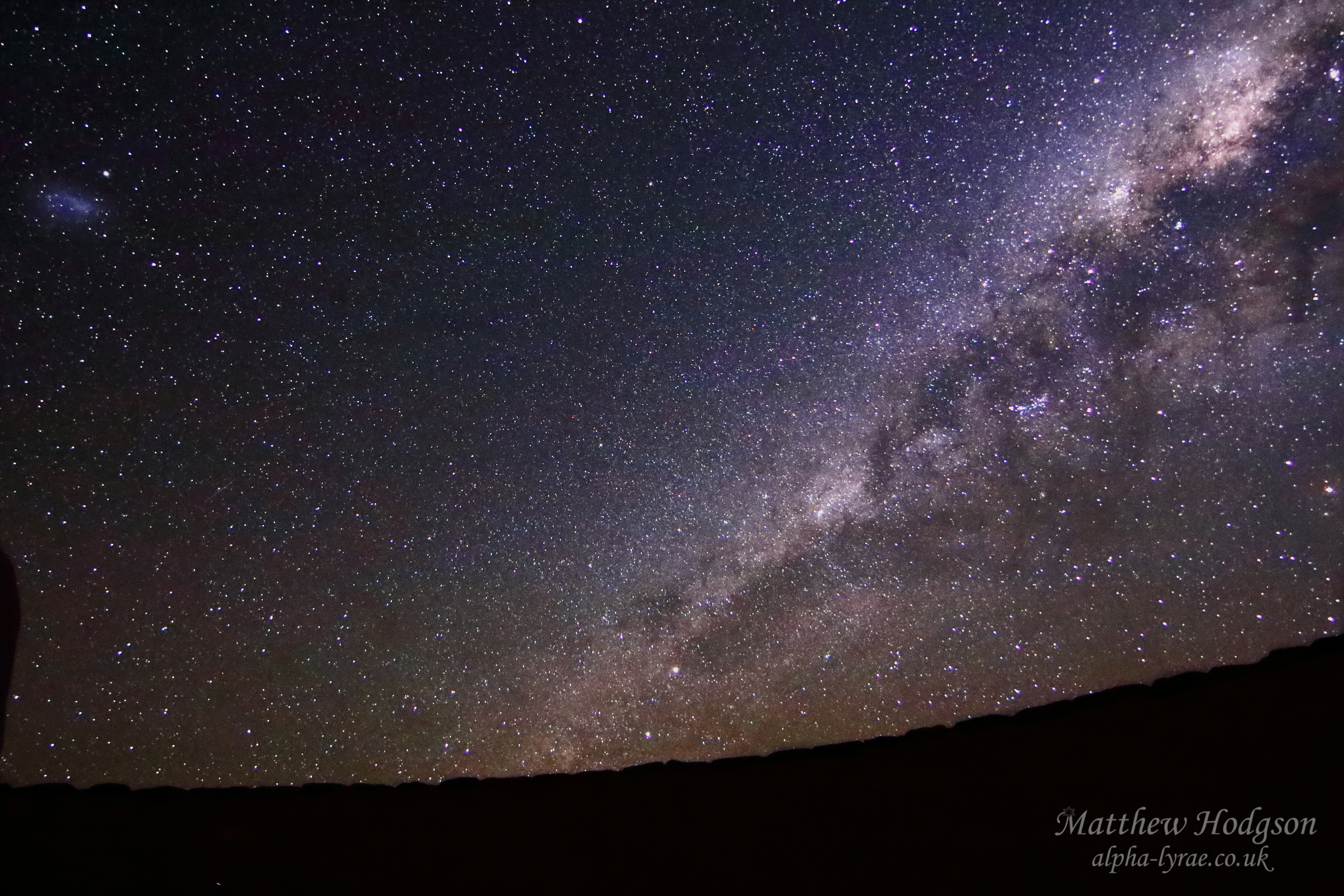 The Carina region of the Milky Way and the Large Magellanic Cloud seen reflecting in the plunge pool of the Sossusvlei Desert Lodge. 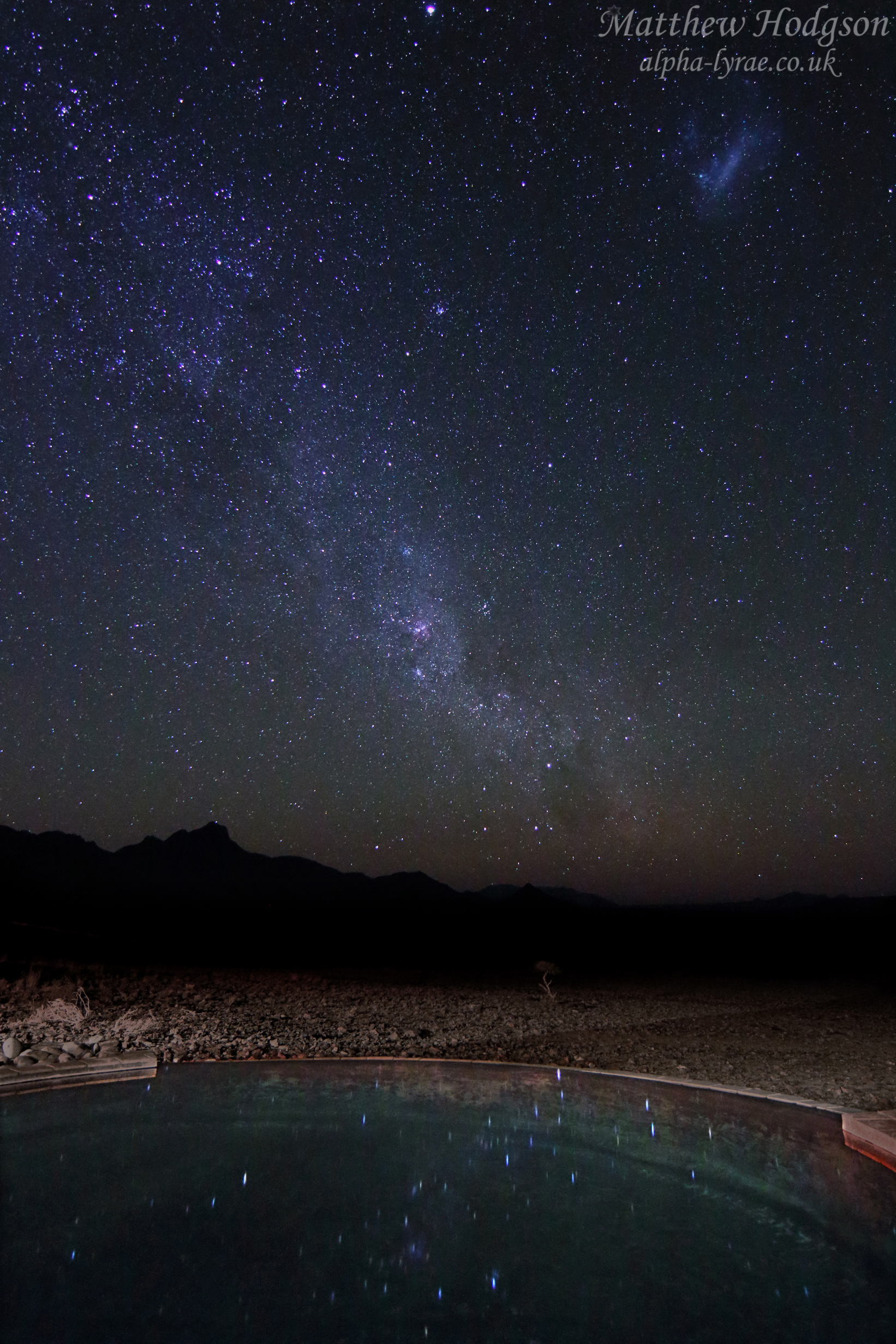 The Carina region of the Milky Way seen reflecting in the lodge plunge pool.

The ever familiar constellation of Orion seen rising above the observatory, though as a northern hemisphere observer, I am not sure I will ever get use to seeing it upside down. 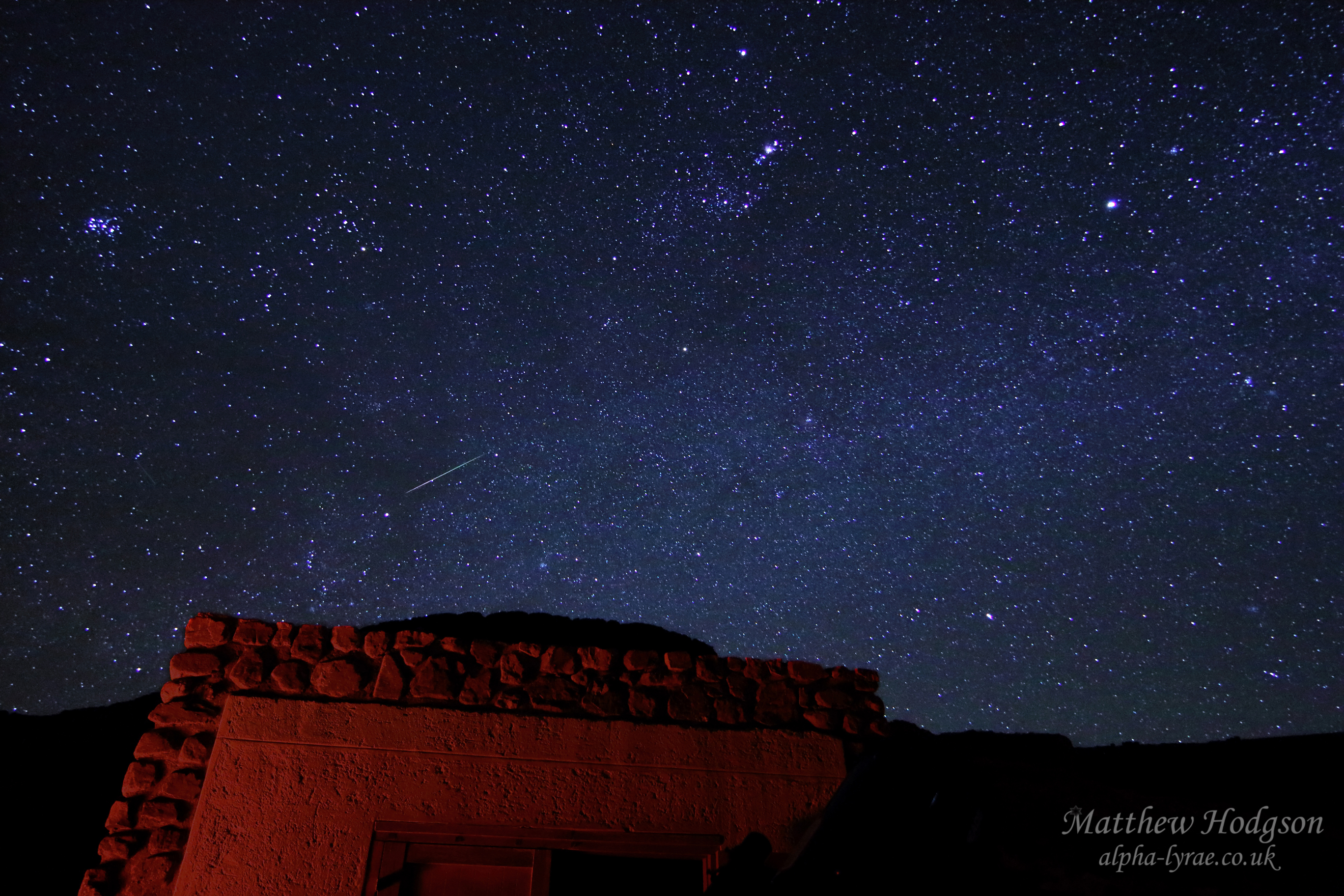 The distinctive shape of Orion rising above the observatory.

I made extensive use of the Vixen SG 2.1×42 binoculars while working as the resident astronomer.  They really took the views of the Milky Way to a whole new level.  You can read the review of the Vixen SGs here. 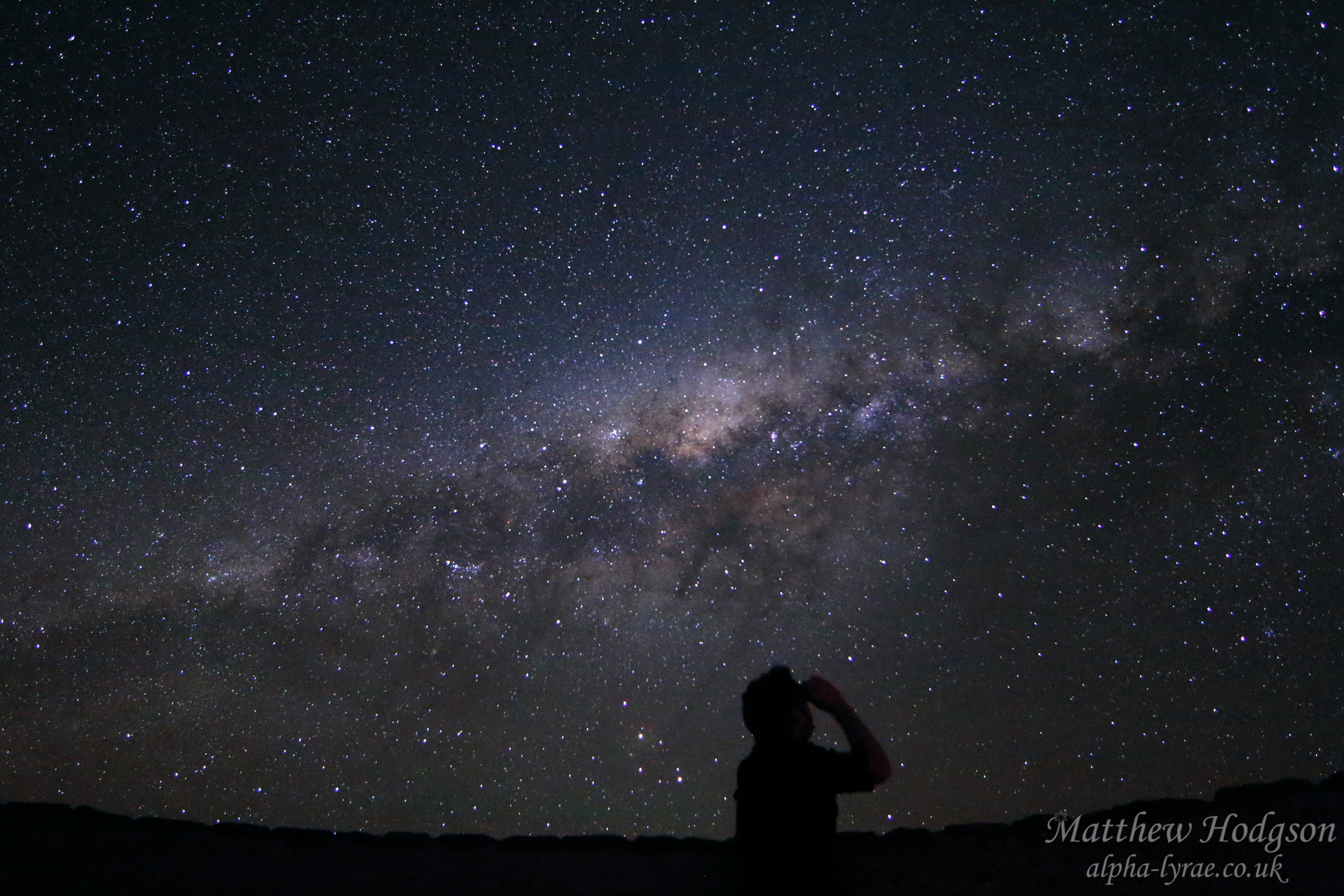 Scanning the Milky Way with the Vixen SG 2.1X42 binoculars.

Sort of an astronomy selfie, capturing me using a laser pointer to point out the location of an interesting celestial treasure to some guests of the lodge with the zodiacal light as a backdrop. 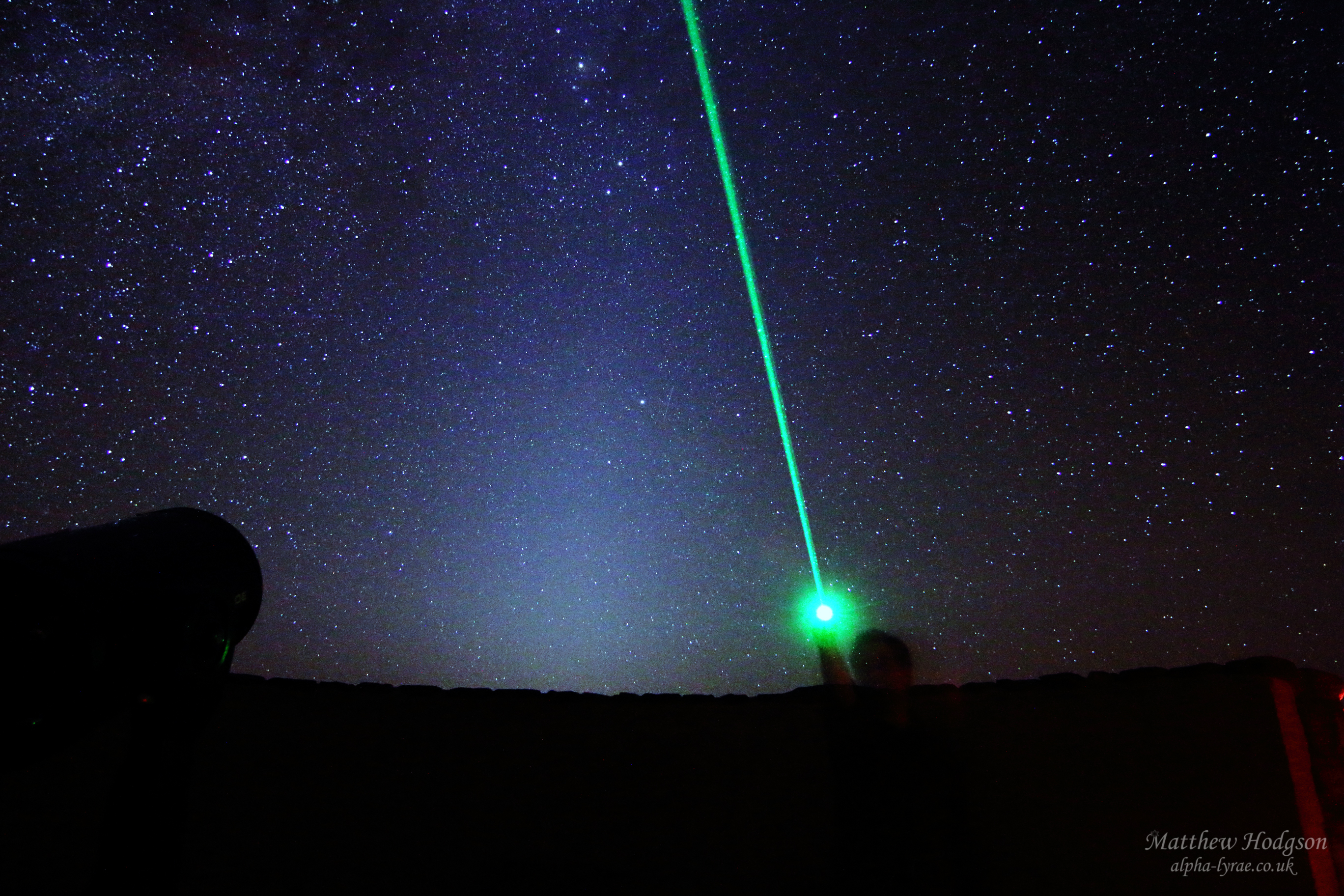 Guiding guests around the night sky with the zodiacal light as a backdrop.

I spent quite some time exploring the the Large Magellanic Cloud and all its nebulae and open clusters with the observatory scope. However, perhaps my absolute favourite DSO in the Southern Sky is 47 Tucanae, a stunning Globular Cluster which can just be spotted as a bright star to the right of the Small Magellanic Cloud in this photo. 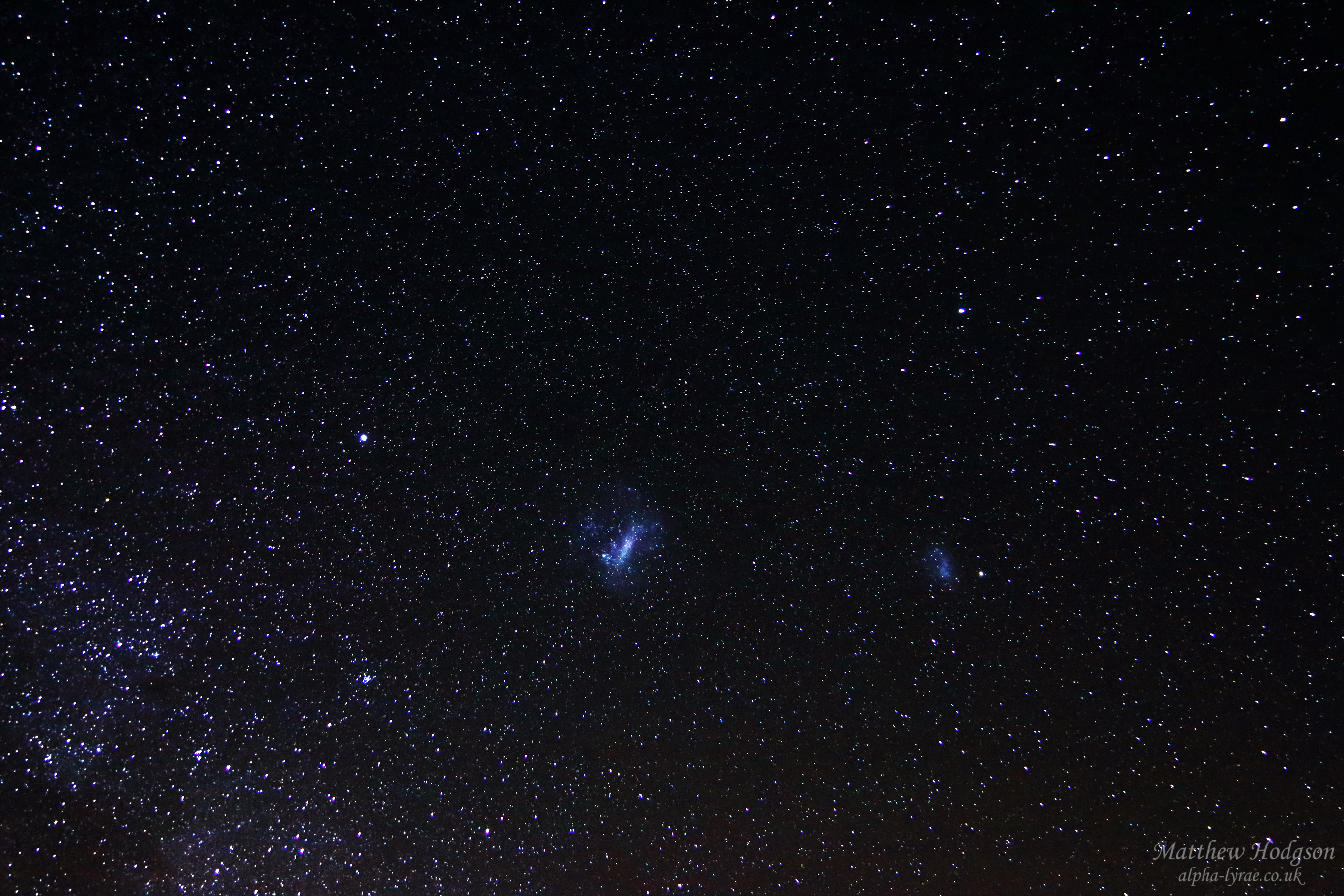 The LMC and SMC as seen from the observatory. 47 Tucanae is visible to the right of the SMC

On the final night of my stay as resident astronomer, we had a wonderful meal by the plunge pool of the lodge, under the spectacular night sky. I could not resist the temptation to try and capture the moment. The hardest part was sitting still for 15 seconds so not to blur ourselves. 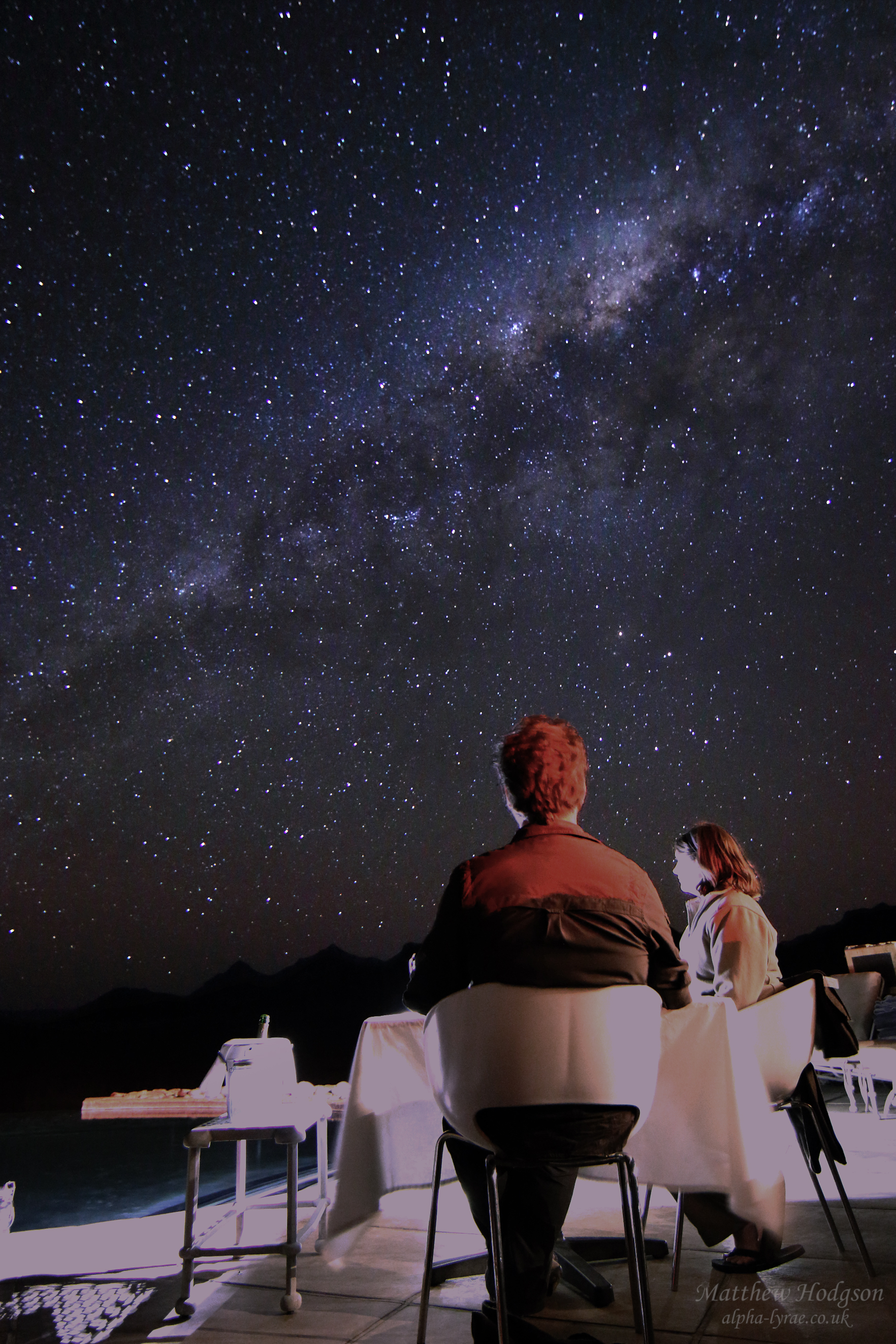 Enjoying a delicious meal under the Sagittarian Milky Way at the lodge.