On the morning of February 15th 2013, a large portion of the world woke to reports and incredible footage of an asteroid streaking across the sky over the city of Chelyabinsk in Russia.  The asteroid’s last few seconds were captured by hundreds of cameras from many angles and locations in the region and combined with other data including seismology has allowed two teams to analyse the  event estimating the energy released and likely origin of the meteor, both who published their results in the 6th November 2013 issue of Nature.

The Chelyabinsk meteorite is the largest recorded impact since the Tunguska airburst event of 1908 in Siberia which was estimated to have an energy equivalent to 5-15 megatons of Trinitrotoluene (TNT), which is some 1,000 times greater than the energy of the Hiroshima atomic bomb.  The Tunguska event was thought to be caused by a small asteroid or comet which exploded at an altitude of 5-10km (3-6 miles).  The air-blast was estimated to have knocked down approximately 80 million trees over an area of 2,150 square kilometres and shockwave would have been recorded as 5.0 on the Richter scale.

A team led by P.G Brown (Department of Physics and Astronomy, University of Western Ontario) and J.D Assink (Commissariat à l’Energie Atomique, Département Analyse Surveillance Environnement) reported an analysis of the damage caused by the airburst of an asteroid estimated at 19 metres in diameter with an energy of 500 ±100 kilotons of TNT (1 kiloton of TNT = 4.185×10^12 joules).  The estimated mass as it entered the atmosphere was 12,000-13,000 metric tonnes (twice as large as initial estimates) and was travelling at an initial speed of 19km per second (over 50x the speed of sound at sea level).  Between an altitude of 45 and 30km the heavily fractured asteroid broke into pieces and at an altitude of 27km the meteor burst into gas and dust.

The team have published a light curve for the event from 5 videos that captured the atmospheric entry, which show some variance of estimated brightness for the duration of the event but agree well for peak brightness at a little over magnitude -28 (for reference the Sun’s magnitude is -26.7).  The video light curve produces an estimated energy of 470 kt of TNT. 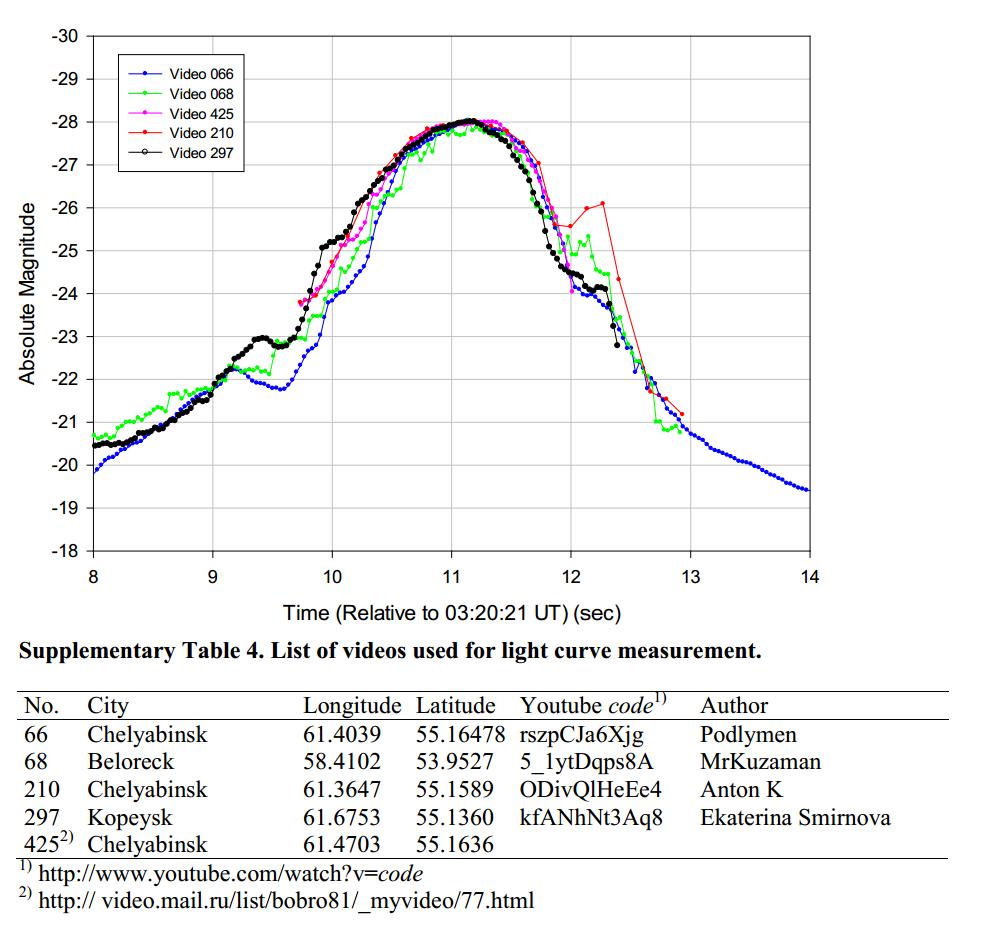 Comparison of the reconstructed Chelyabinsk
light curve from five videos.

The team used a variety of other models to estimate airburst damage including the bolide period – yield (E) relation of log E = 3.28log(P) + 0.71 (virtually identical to the widely used nuclear weapons data testing as given by the Air Force Application Centre) which gives a best estimate of 600 kt, however the standard error allows for values of equivalent energy of 350-990 kt.  Using seismic analysis, the team estimated the yield of the Chelyabinsk airburst relying on the empirically validated and well-developed theory of seismic surface wave generation from airborne nuclear explosions.  By applying a surface wave empirical relation, the estimate was Ms at 4.0 ± 0.3 corresponding to a nominal yield of 300 kt, though the error bounds allow for a range of 60 kt to 2,000 kt.  US government sensor data, modelling a blackbody of 6,000K, leads to estimates of 530 kt with a range of 450-640kt.

Using a triggered progressive fragmentation model, simulating meteoroid motion, ablation and radiation, to allow a changing tensile strength for the meteoroid, an estimate of the size and density was made by constraining the model using the observed light curve, and to a lesser extent the bolide kinematics, to provide a check on the estimate of the total energy.  The size was found to be 19 metres, grain density was 3700 kg m-3, with 5% porosity and a total energy of 500 kt (via a CTH Hydrocode model).

The team concluded that these widely used mathematical relations based on the effects of nuclear weapons overestimate blast damage and the number of impactors with diameter of tens of metres may be an order of magnitude higher than estimates based on other techniques.  The implication of this conclusion is risk of similar objects hitting the Earth may be 10x higher than previously thought.

The second published paper from a team led by Jiří Borovička (Astronomical Institute, Academy of Sciences of the Czech Republic) and P G Brown (Department of Physics and Astronomy, University of Western Ontario) found that the orbit of the Chelyabinsk meteor is similar to a two kilometre diameter asteroid 86039 (1999NC43) to a degree of statistical significance that suggests they were both once part of the same object.

Thousands of small fragments have now been recovered, though only a few large pieces have been recovered and asteroid was found to be an ordinary chondrite from the asteroid belt located between Mars and Jupiter.  One 3.4kg rock was recovered near the town of Timiryazevskiy and another hit the roof of a house in Deputatskiy.  The largest single surviving fragment was a 600kg meteorite recently recovered by divers from the bottom of Lake Chebarkul, 60km southwest of Chelyabinsk. 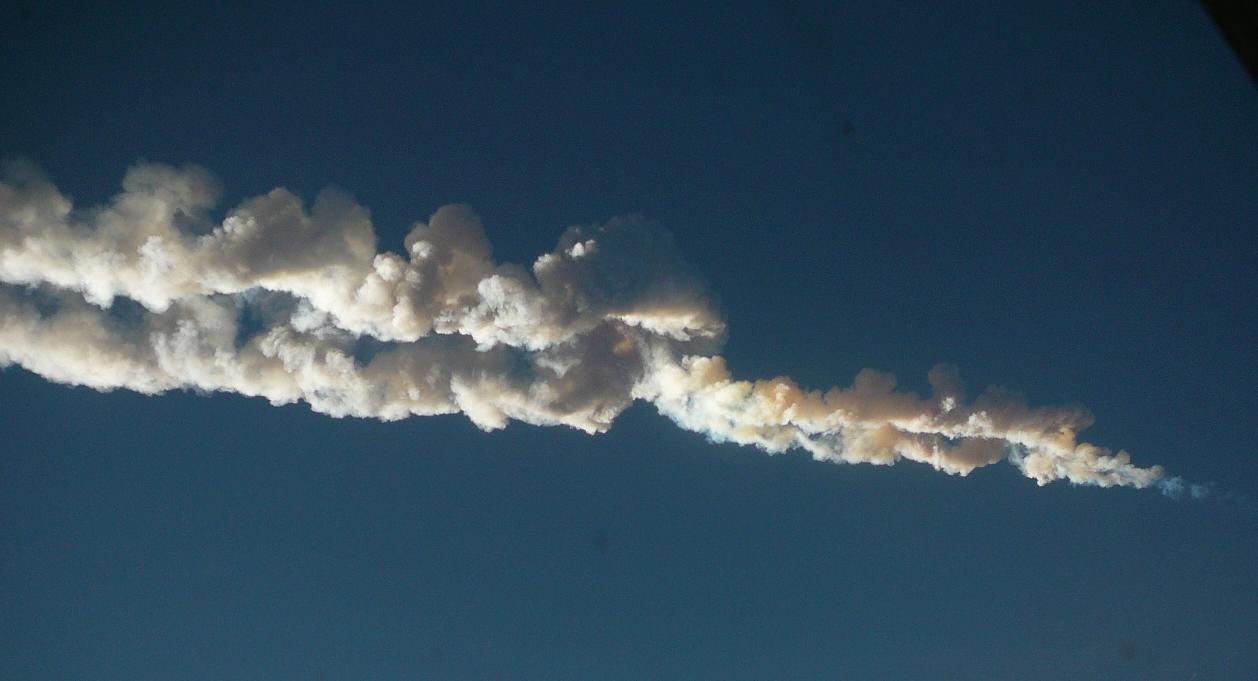