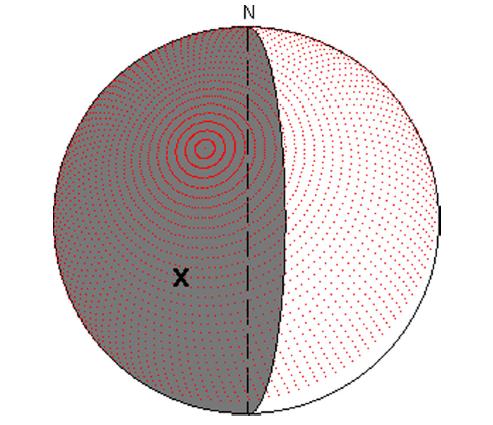 The importance of such work comes from its suitability to study the flux of interplanetary matter impacting the Earth.  Hypervelocity impacts generate radiation in the optical part of the electromagnetic spectrum, known as the ‘flash’ from the high temperature vaporised plasma.  Theoretical work by Yanagisawa & Kisaichi in 2002 and Bouley et al. in 2012 suggest that for lunar impact flashes, optical radiation is also emitted from the condensing ejecta that cool to form silica droplets.  The thermal emission from the droplets would last longer than the plasma generated flashes.  Observing lunar flashes has the a substantial advantage over terrestrial meteor networks in that it covers a far larger area than the atmospheric volume monitored by said terrestrial systems.  The technique involves the systematic monitoring of the night side of the moon; effectively this means during the first and last quarters (limitation of maximum illumination of the moon of 60%).  For the technique to have confirmed detection events, at least two telescopes must operate in parallel to remove false detections, such as those caused by cosmic rays. 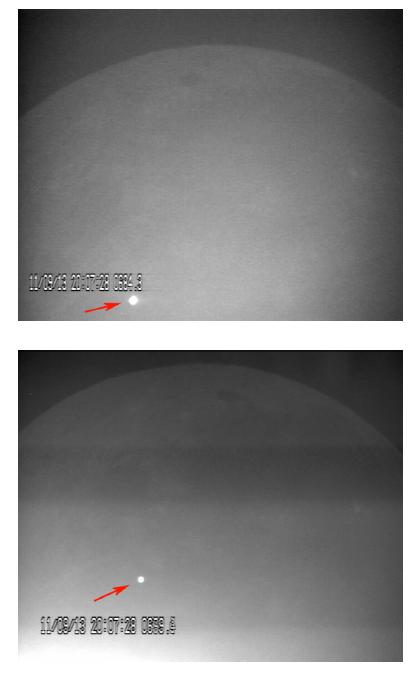 The MIDAS system employs three telescopes, two 36cm diameter Celestron Schmitt-Cassegrain and one smaller 28cm Celstron Schmitt-Cassegrain.  Each scope has f/3.3 focal reducers from Meade Instruments and use monochrome high-sensitivity CCD video cameras (model 902H Ultimate) manufactured by Watec Corporation which employ a Sony ICX439ALL 1/2 inch monochrome CCD sensor and produce interlaced analogue imagery according to the PAL video standard.  Images are obtained with a resolution of 720 × 576 pixel and a frame rate of 25 frames per second.  To maximise lunar surface coverage, the CCD chips are orientated such that lunar equator is perpendicular to the long axis of the chip. 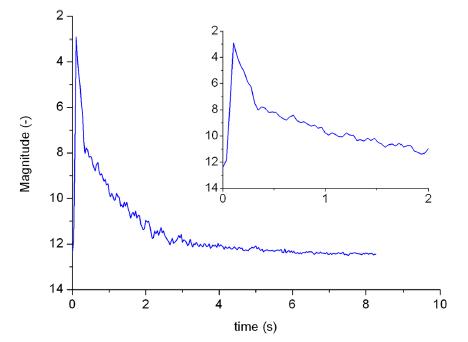 The plotted light curve of the event shows a very rapid decay in brightness with an approximately 5 magnitude decline from +2.9 to +8 in only 0.25 seconds.  After 8 seconds, the main flux decay reached the background level of about magnitude +12.

The observed luminosity of the flash was used to determine the radiated power.  By numerically integrating the radiated power with respect to time, the energy released as visible light can be calculated and from this, using the simple relationship of E = ηEr (where η is the luminous efficiency, i.e. the fraction of kinetic energy emitted in the visible), the magnitude is related to the kinetic energy.  Using a luminous efficiency of 0.002, the team estimated the energy released during the impact was 15.6 ± 2.5 tons of TNT (6.5±1.0 × 1010 Joules).

As the event did not occur during a specific meteor shower, it is likely the result of a sporadic meteoroid.  In this case, the average impact velocity is around 17kms-1 and then it is very simple to derive the mass given the previous calculation of kinetic energy using the formula E= ½ mv2.  The team calculates a mass of 450 ± 75 kg.  To calculate the size of impactor, the team considered a bulk density ranging from 0.3 (soft cometary material) to 3.7gcm-3 (ordinary chondrites).  Thus, the diameter of the meteoroid would range between 142 ± 9 and 61 ± 3 cm, respectively.

However, the team points out that two days earlier that a very minor meteor shower, the September ε-Perseids, exhibited an outburst for about 3 hours on September 9th at the rate of about 3 per minute.  While the rate was back to normal by the time of the recorded impact, since the active period extends to September 23rd, it is possible the flash was caused by one of these perseids which has been calculated to have an impact velocity on the moon of some 53.2kms-1, far higher than the sporadic meteoroid velocity used.  Adjusting for the higher velocity, the impactor mass is estimated at 46 ± 7 kg.   The ε-Perseids are cometary debris, so using the average bulk density for cometary meteoroids of 1.8gcm-3, the team states the diameter would have been 36 ± 2 cm.  The team still favours a sporadic origin as magnitude -8 fireballs (the brightest recorded during the outburst) generated from the ε-Perseids would have a mass of only 70 grams.

The team calculates the impact crater would have a diameter of between 46m and 56m depending on source (and corresponding velocity and impact angle) and bulk density.  While this is small for ground based observatories, lunar orbiting spacecraft can identify and measure the dimensions which would allow further constraints on luminous efficiency, which the team state is poorly characterised and important for the refinement of impact flux on Earth.

Due to the correction factor for the gravitational focusing of the Earth relative to the moon, the impact energy of the lunar impact flash would be equivalent to impact energy of 28.3 ± 4.5 tons of TNT on Earth for the sporadic meteoroid and 24.3 ± 3.8 tons of TNT for the ε-Perseid meteoroid.  The impact rate on Earth for events with energy above these values would be of about 1680 ± 1050 events per year.  This is considerably higher than the ∼90 events per year predicted for this impact energy by Brown et al in 2002 though the Brown team revised their estimate up by a factor of 10 in 2013 which is coincident with this analysis.

I find this work rather exciting, not just because it is helping to establish the true rate of impacts on Earth (recent work on Chelyabinsk event indicates the large asteroid impact rate is higher than previously thought), but also that readily available amateur equipment (I own a 28cm Celestron Schmitt-Cassegrain, a Meade f/3.3 focal reducer and a Watec high sensitivity video camera) is used.  Monitoring the Moon in this way could be a suitable project for advanced amateur astronomers.