Discovered in the early hours of January 1st 2014 by the Catalina Sky Survey near Tuscon, Arizona, a single track of observations with an immediate follow up were made of what was possibly a very small asteroid in the region of 2 to 3 metres in diameter (7-10 feet), which was on a potential impact trajectory with the Earth.  The object was designated 2014 AA which would make it the first asteroid discovery of 2014 and possibly only the second detection of object before it entered the atmosphere.

However, the limited track of observations only allowed for uncertain orbit to be calculated, though if the object were small, it would most likely enter the Earth’s atmosphere sometime between 7pm Universal Time (UT) on Wednesday 1st January and 1pm UT on Thursday 2nd.

Using the limited observations, three independent projections of the possible orbit by the independent orbit analyst Bill Gray, the Minor Planet Centre in Cambridge, Massachusetts, and Steve Chesley, of NASA’s Near-Earth Object Program Office at the JPL in Pasadena, California, were all in agreement that 2014 AA would hit the Earth’s atmosphere.  According to Chesley, the potential impact locations are widely distributed because of the orbit uncertainty, falling along an arc extending from Central America to East Africa with the most likely impact location off the cost of West Africa at around 1am UT on January 2nd.

The size of the object was very similar to 2008 TC3 which was also around 2-3 metres in size and as such it was expected that nothing of 2014 AA would survive atmospheric entry.  2008 TC3 completely broke up over northern Sudan in October 2008 and is the only other example of an object discovered just prior to hitting the Earth.

The following day, several sources confirmed that 2014 AA entered the atmosphere on January 2nd UT over the mid-Atlantic Ocean.  High-precision astrometry data and rapid follow-up observations provided by the Catalina Sky Survey team made it possible for orbit analysts from NASA’s Near-Earth Object Program Office at JPL to determine possible Earth impact locations.  Before that, and based upon the Catalina Sky Survey observations, Steve Chesley produced a plot of the possible impact region for asteroid 2014 AA which is seen in the figure below as the blue band.

This location data allowed Peter Brown of the University of Western Ontario and Petrus Jenniskens of the SETI Institute to search the data from low-frequency infrasound observation sites of the Comprehensive Nuclear-Test-Ban Treaty Organization.  Weak signals from stations in Bolivia, Brazil and Bermuda were found that indicated the likely impact location was indeed positioned within the predicted area (marked with a red dot) though there is still some uncertainty due to observational factors including atmospheric effects on the propagation of infrasound signals. 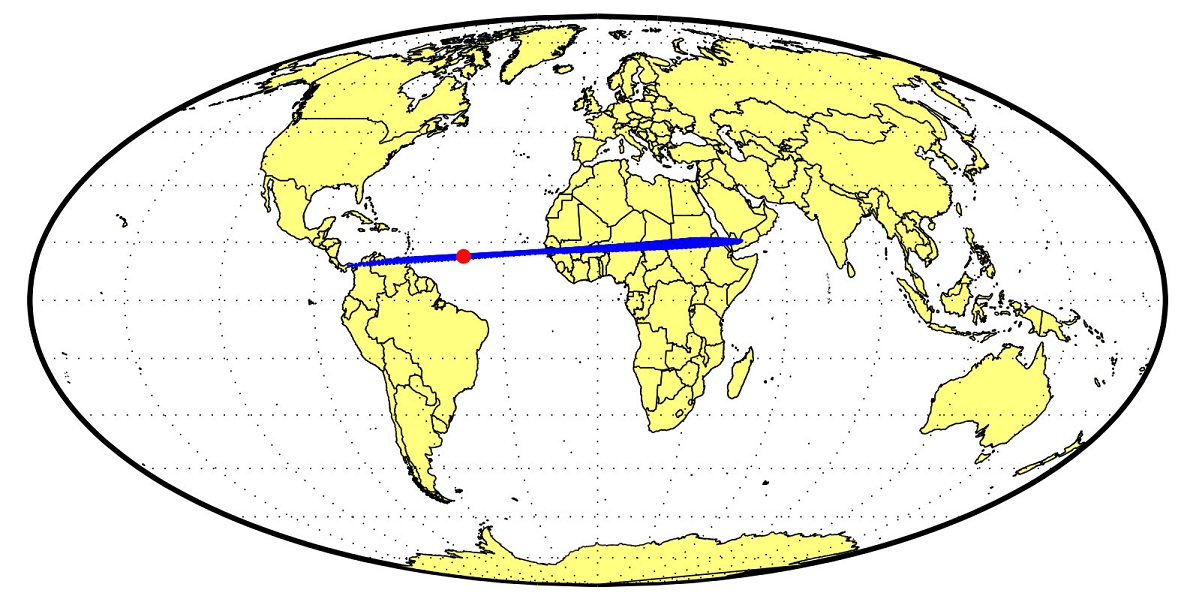 Map depicting possible impact locations of asteroid 2014 AA(blue band) is based on Catalina Sky Survey images. The most probable impact location, based on infrasound data, is depicted by the red dot. Image Credit: NASA/JPL-Caltech

The best estimate derived from the infrasound data which is used to record ultra-low-frequency sound waves emitted from atmospheric explosions which are often caused by airbursts from small asteroid impacts is: Impact time: Jan. 2 4:02 UT / Impact location coordinates: 11.7 degrees north latitude, 319.7 degrees latitude.   The uncertainty in these numbers amounts to a few hundred kilometres, in location, and tens of minutes in time. 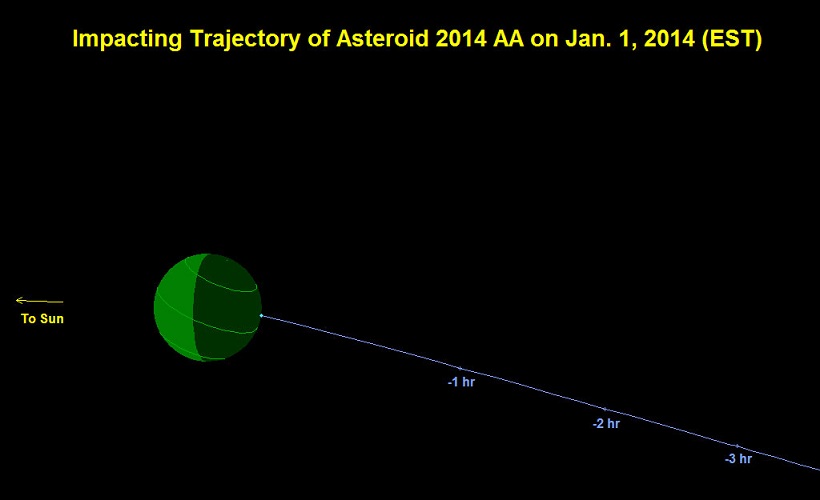 The trajectory of the final hours of asteroid 2014 AA. Image Credit: NASA/JPL-Caltech