Writing in the October 3rd, 2013 issue of Nature, Joseph Michalski (Planetary Science Instiitute / Natural History Museum) and Jacob Bleacher (NASA Goddard) propose that the Eden Patera Basin on Mars, previously categorised as an impact crater may in fact be the remains of a Super Volcano which would be the first discovery of its kind.  The researcher assessed topographic maps of the region from 4 spacecraft in orbit around the red planet (NASA’s Mars Odyssey, Mars Global Surveyor, Mars Reconnaissance Orbiter and ESA’s Mars Express). Michalski et. al believe the basin is a volcanic caldera.  A caldera is typically formed by the collapse of land following a volcanic eruption when magma chamber is emptied.  If sufficient magma is ejected during an eruption, the now empty chamber is unable to support the weight of the volcanic edifice above it.

A super volcano is typically defined as any volcano which is capable of producing an eruption with an ejecta volume greater than 1,000 cubic kilometres.  This volume of material is on the order of thousands of times more than from normal volcanic eruptions.

Upon inspection of topographic data, the researchers noted that the lack of a expected raised rim of an impact crater and the lack of nearby ejecta blanket.  Further analysis by the team led them to identify features normally expected of volcanism including a series of rock ledges that might be left after a lava lake slowly drains as well as faults and valleys that occur when the ground collapses because of subsurface activity.  These and other features convinced the authors that the Martian feature should be reclassified.  It may well be that the regional geologic conditions were favourable for super volcanoes as the team identified other possible reclassification candidates nearby. 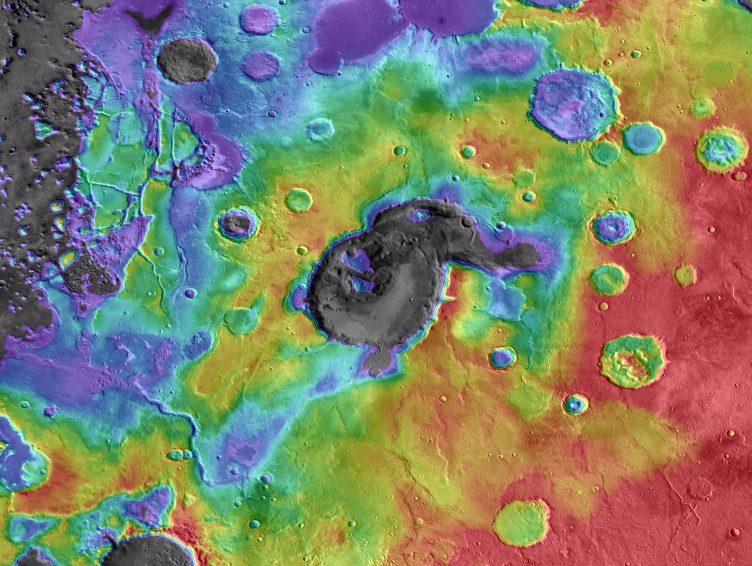 Published Abstract from Nature:
Supervolcanoes within an ancient volcanic province in Arabia Terra, Mars.
Several irregularly shaped craters located within Arabia Terra, Mars, represent a new type of highland volcanic construct and together constitute a previously unrecognized Martian igneous province. Similar to terrestrial supervolcanoes, these low-relief paterae possess a range of geomorphic features related to structural collapse, effusive volcanism and explosive eruptions. Extruded lavas contributed to the formation of enigmatic highland ridged plains in Arabia Terra. Outgassed sulphur and erupted fine-grained pyroclastics from these calderas probably fed the formation of altered, layered sedimentary rocks and fretted terrain found throughout the equatorial region. The discovery of a new type of volcanic construct in the Arabia volcanic province fundamentally changes the picture of ancient volcanism and climate evolution on Mars. Other eroded topographic basins in the ancient Martian highlands that have been dismissed as degraded impact craters should be reconsidered as possible volcanic constructs formed in an early phase of widespread, disseminated magmatism on Mars.