A team led by scientists from Texas A&M University and the University of Texas at Austin have published the result of a new study of high red shift galaxies, detecting the most distant spectroscopically confirmed galaxy yet found at z of 7.51.  The result was published in 24th October 2013 edition of the journal Nature.

The HST has identified hundreds of candidate galaxies with red shifts that would be observed when the universe was less than 1 billion years old.  However, until now, very few have been confirmed spectroscopically, with only 5 to date having a red shift in excess of 7.0 by identifying the Lyman Alpha emission line.

The technique employed currently to gauge extra galactic distances is via identification of the strong emission line called Lyman Alpha transition.  The line is detected in nearly all distant galaxies that are seen more than 1 billion years after the big bang, yet for reasons that are not currently well understood, the line becomes very hard to see from periods less than 1 billion years after the big bang.

The team led by Steven Finkelstein at the University of Texas at Austin used the newly commissioned MOSFIRE spectrograph on the Keck I telescope which was installed in 2012 and used 43 candidate galaxies from the Hubble Space Telescope Cosmic Assembly Near-Infrared Deep Extragalactic Legacy Survey (CANDELS).

The new record holder, galaxy z8_GND_5296 has a measured red shift of 7.51, implying that the light left the galaxy when the universe was only 700 million years old, some 5% of the current measured age of the universe.  Arguably more interestingly though is the galaxy is seen to have a star formation rate a 100 times greater than currently seen in the Milky Way.  The measured colours indicate a high metals contact implying the galaxy has been rapidly enriched with heavier elements and the team calculates a star formation rate of over 300 solar masses per year.  The authors state that this discovery of such high star formation was unexpected and may indicate there are a larger number of star formation sites in the earlier universe than previously anticipated. 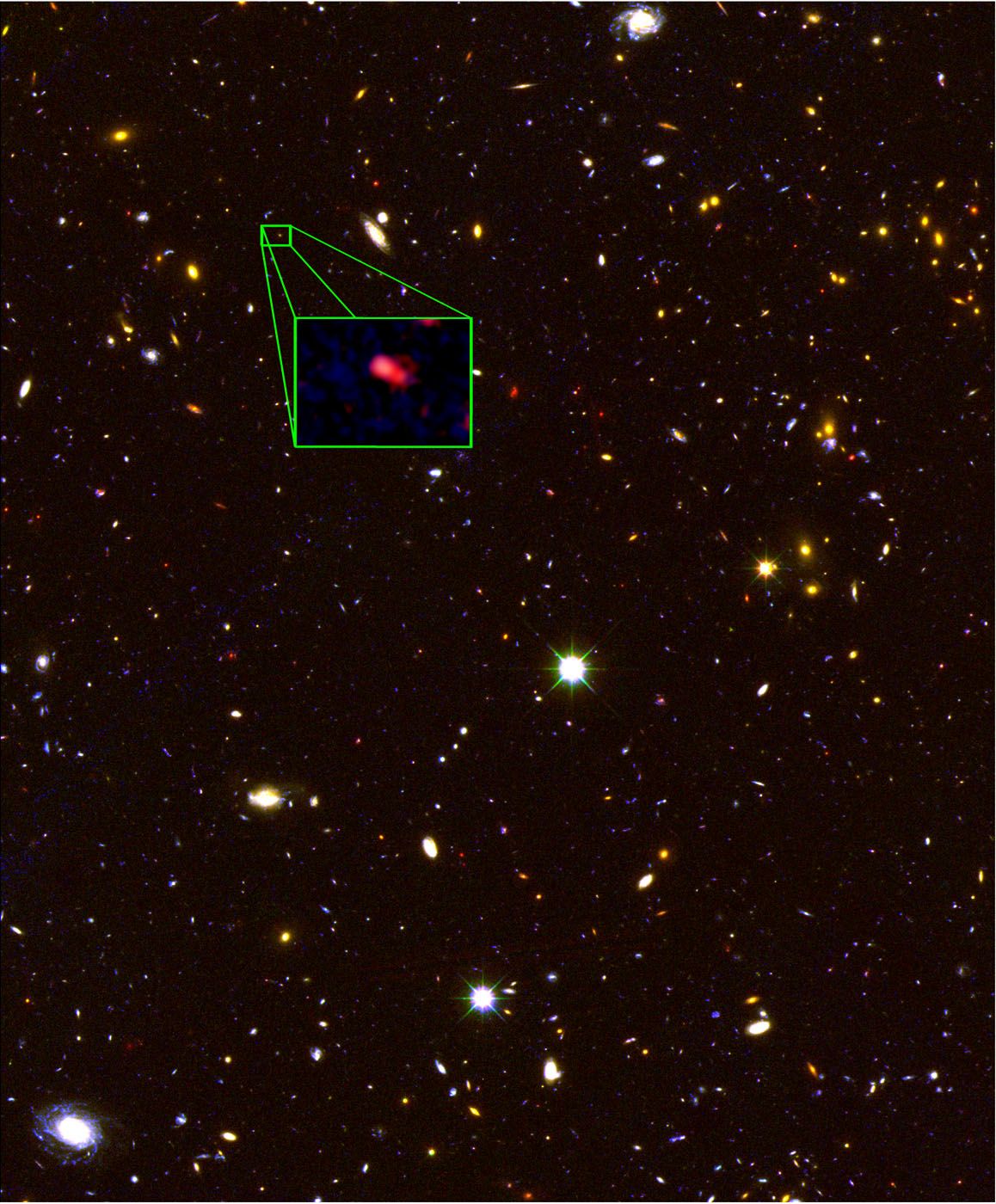 A galaxy rapidly forming stars 700 million years after the Big Bang at redshift 7.51

Of several dozen galaxies observed spectroscopically that are candidates for having a redshift (z) in excess of seven, only five have had their redshifts confirmed via Lyman α emission, at z = 7.008, 7.045, 7.109, 7.213 and 7.215.  The small fraction of confirmed galaxies may indicate that the neutral fraction in the intergalactic medium rises quickly at z > 6.5, given that Lyman α is resonantly scattered by neutral gas. The small samples and limited depth of previous observations, however, makes these conclusions tentative. Here we report a deep near-infrared spectroscopic survey of 43 photometrically-selected galaxies with z > 6.5. We detect a near-infrared emission line from only a single galaxy, confirming that some process is making Lyman α difficult to detect. The detected emission line at a wavelength of 1.0343 micrometres is likely to be Lyman α emission, placing this galaxy at a redshift z = 7.51, an epoch 700 million years after the Big Bang. This galaxy’s colours are consistent with significant metal content, implying that galaxies become enriched rapidly. We calculate a surprisingly high star-formation rate of about 330 solar masses per year, which is more than a factor of 100 greater than that seen in the Milky Way. Such a galaxy is unexpected in a survey of our size, suggesting that the early Universe may harbour a larger number of intense sites of star formation than expected.