2015 Update:  This page was originally published in 2013 and relates to Christmas Eve of that year.  Please click here for Christmas Eve 2015 information.

How wonderful would the look on a young child’s face be when they see Santa flying over your house on Christmas Eve?  How you ask?  A little bit of astronomy and the International Space Station can make it happen.

On December 24th from the UK (times are for London but it can be seen from the whole of the UK at about the same time) the International Space Station will fly across the sky beginning at 5:57pm (5:59pm the ISS will be 10 degrees above the horizon and far more obvious) and will disappear into the Earth’s shadow at 6:04pm.  It will look like a very bright star slowly moving across the sky, brighter than any star in fact so will be easy to spot, assuming it is not cloudy.  As the station is heading from the West to the South East you can explain Santa is flying to the children in “Asia” etc where it is already nearly Christmas.

Below is a star chart with a plot of the ISS overlaid.  The station will appear over the western horizon before passing through the distinctive “Summer Triangle” stars of Vega, Deneb and Altair and then passes south of the great Square of Pegasus which gives plenty of celestial landmarks to help you located the station.  I would suggest that you find a reason to go outside at around 5:50pm and then excitedly point at Santa when you spot him to avoid disappointment in case the great British weather does not play ball. 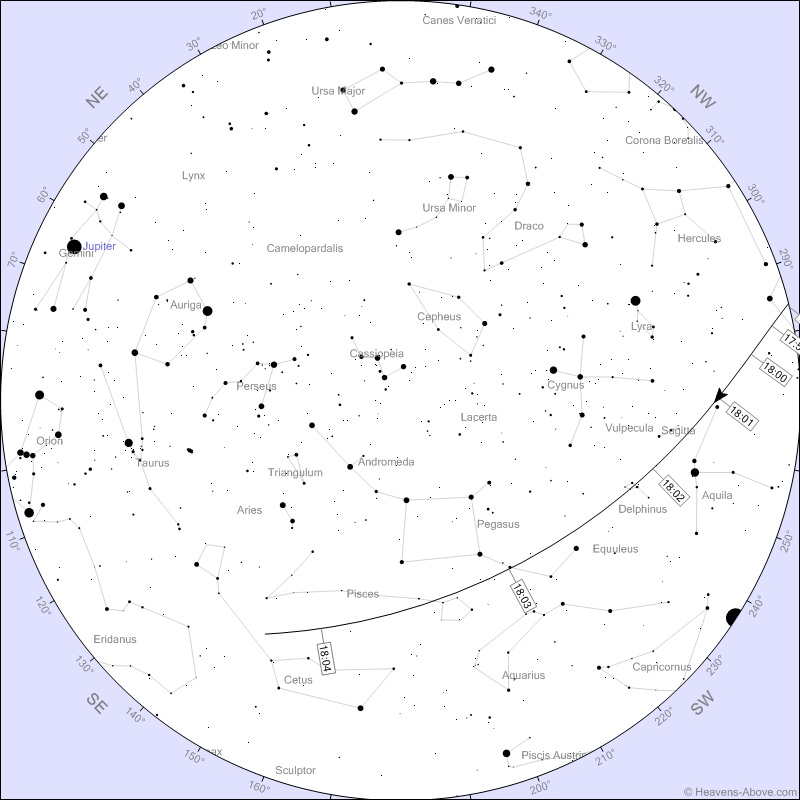 I think that might make things just a little more magical…

The ISS orbit is currently favourable for evening flybys for a large part of the dense population centres of the world.  For example there is favourable pass of the ISS over the north east US at around 5:38pm ET.  If you wish to see what time you should be outside, please go to Heaven-above.com and enter you location via the “Change your observing location” link, either manually by placing a cursor on the world map or search for your town/city and then select 10-day predictions for Satellites of special interest “ISS.”

One and the same? This Christmas Eve, just maybe.